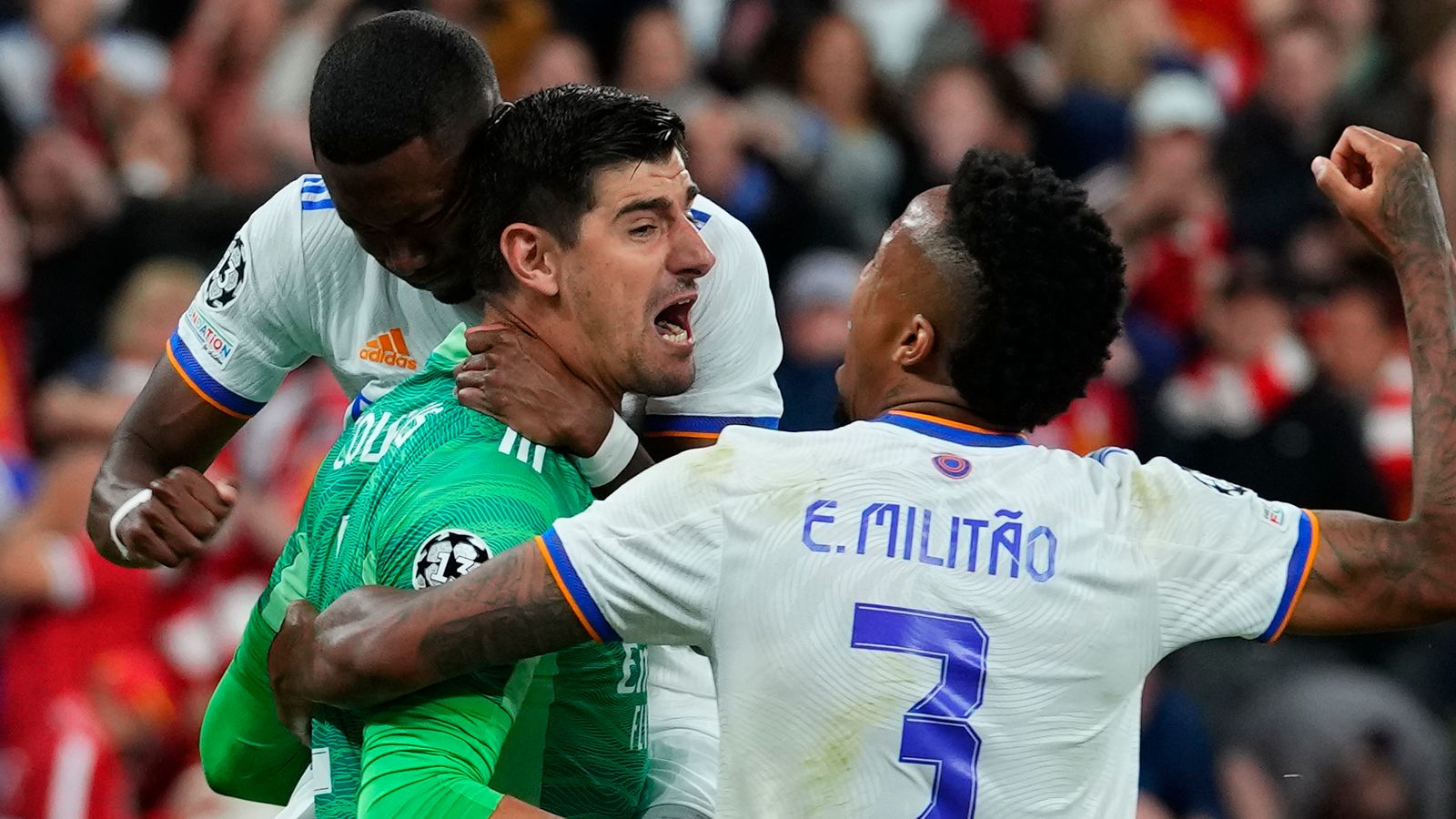 There were only two Real Madrid shots on target all night, which showed how underworked Alisson was and he could do nothing about the goal, with Vinicius free at the back post. He was relieved to see Benzema’s strike before the break ruled out after he had bundled into Konate during a scramble that led to the effort but had a watching brief for much of the night.

His battle with Vinicius was a big talking point before the game and while he repeatedly showed why Real Madrid needed to be worried about his own attacking threat during the first hour, losing track of the Brazilian for the opener was a costly lapse.

Had looked badly out of sorts against Wolves on Sunday but, given the nod ahead of Joel Matip, Konate produced a big performance on the big stage. He showed his class early on dispossessing Vinicius and cut out a dangerous-looking pass to the Brazilian later in the first half. He involved in a collision with Alisson which led to Benzema’s disallowed strike before half-time but an excellent tackle on Vinicius on the edge of the box after the break was another highlight.

Was there a rare error from the Dutchman for Real Madrid’s goal? It seemed that way, with Van Dijk backing off and backing off to allow Valverde to press into the box before lashing a low cross for Vinicius to turn in. Otherwise the fit-again defender had brought organization and composure to a Liverpool defense which had been exposed by Wolves last time out.

The left-back has enjoyed a fine season and did little wrong here, although he was not seen on the front foot in the first half as often as we have become accustomed to. He did find Mane for a chance late in that opening period and was more involved in the second as Liverpool pressed for an equaliser but could not come up with the solution.

A fitness doubt right up until kick-off, with concerns about whether he had shaken off his injury from Sunday raised during the first warm-up, but started as planned and looked as slick as ever, running the midfield for Liverpool. He had had more touches than any other player when he was sacrificed for Firmino with 15 to play.

He has lifted the lot as captain of Liverpool but will be gutted not to have got his hands on a second Champions League trophy. He set the tone from the first whistle with his energetic pressing and enthusiasm for the occasion and drilled a shot wide just before half-time. He continued to chase, harry and try to make things happen before he was brought off in the second half.

The winger has hit the ground running at Liverpool but ran into a well-supported experienced right-back at Carvajal in Paris. The pair were locked in an intriguing battle, with the Colombian dribbling at his opposite number at any opportunity, but Diaz’s substitution shortly after Real’s opener showed which of them came out on top.

There had been talk before the game that Mane could have sealed the Ballon d’Or with a top performance in Paris but in what may be his final Liverpool appearance he was unable to come up with a moment of magic. Fine margins didn’t swing his way when Courtois pushed one shot onto a post amid a couple of looks at goal in the first half but, playing through the middle, he was well marshalled and unable to repeat his scoring feat of the 2018 final.

Salah was left slapping the ground after yet another stunning stop from Courtois in the second half and that summed up his frustrating night. He’d spoken about the score he had to settle with Real Madrid after 2018 but while he will feel he should have done better with a couple of early chances, he was up against an inspired shot-stopper with his openings in the second half.

Sent on to make a difference in the final third and almost came up with a decisive touch from a cross-shot – but Courtois, as ever, was there.

The chance that got away? Badly miscued when the ball came to him on the edge of the box in a moment which left him with his head in his hands.

On with 15 minutes to play for Thiago and teed up Keita for his miss. Repeatedly found small spaces in the final third but not the breakthrough moment.

As much of a match-winner for Real Madrid as Vinicius. The brilliant Belgian looked in top form when he followed a sharp early save from Salah with a sublime stop to push a Mane strike onto the post and he was at it again after the break, racing across his goalmouth to block another Salah effort before a stunning one-hand stop to deny the Egyptian again.

Always set to be in for a busy night up against Luis Diaz but showed he was relishing the challenge early on and, with Valverde’s support, managed to limit the Liverpool man in the first half. He pulled off a superb defensive header at the start of the second and now moves onto a joint-record five personal Champions League titles along with several other esteemed team-mates.

A defender who can look vulnerable at times but Militao stepped up when Liverpool put the squeeze on in the second half, making an important tackle on the edge of his own box and following it up with a key block when Mane had some space in the area .

Real Madrid’s main man at the back returned to their defense and, like Militao, came into his own in the second half, snuffing out a Salah shot with his arm tight against his body before clearing crucially from a corner.

With Salah and Alexander-Arnold attacking down his channel it was no surprise he didn’t make much progress down the left side as an attacking force but picked out Benzema with a fine pass over the top for the Real Madrid striker’s ruled-out strike before half-time and dealt with the double threat coming his way well throughout the contest. A big sliding tackle on Alexander-Arnold in the second half brought cheers from the Real fans.

An experienced, wily campaigner used all his know-how to cover for Carvajal when Luis Diaz was charging at the Real defense and although he gave the ball away cheaply a couple of times in midfield, he was there, scrambling the ball away and making key interceptions, when Liverpool were pressing for an equaliser. Picks up Champions League number five.

Topped the Real Madrid passing stats in the first half, showing he’s as good on the ball as ever, but was sometimes stretched by the Reds’ energetic midfield and didn’t go on to have the same influence on the match as his mates in midfield . But a solid showing and another piece of silverware to add to his bulging cabinet.

Real Madrid’s unsung all-rounder. In attack, he set up the opener when he was allowed to dribble in from the right, having forced the ball to Benzema for his disallowed strike in the first half. And going backwards he was charged with helping Carvajal deal with Luis Diaz, which proved a successful tactic. Not a superstar but a key component.

A quiet first half for the 36-year-old maestro, largely spent on the back foot, but a trademark move got Real going for their opener and he sprayed it well for Vinicius as he began to tick. By the time he parted with a couple of minutes left to play he’d returned to his usual commanding levels.

Scorer of the opener, tucking in Valverde’s cross at the back post, Vinicius will be the poster-boy of this Real Champions League win along with Benzema. An ace on the left wing, he was a livewire throughout and a real threat whenever he was fed the ball. A breakout campaign for a superstar of the future… if he isn’t already one.

Barely had a look-in during most of the first half with Liverpool bossing possession but came alive with his one opening when he had a strike chalked off for a narrow, controversial offside. After that he played the target man role well, especially when Real had hit the front, giving his team-mates an outlet. There was no goal – but there’s been plenty of them from him in this competition this season. Champions League number five for the Frenchman in Paris and a good chance the Ballon d’Or is coming his way too.

Has earned a reputation as an expert game-finisher for Real Madrid in the Champions League this season and ensured they navigated the tricky final minutes to seal the silverware.

The former Arsenal man made a surprise cameo late on but fluffed a chance to tee up Vinicius for a second.