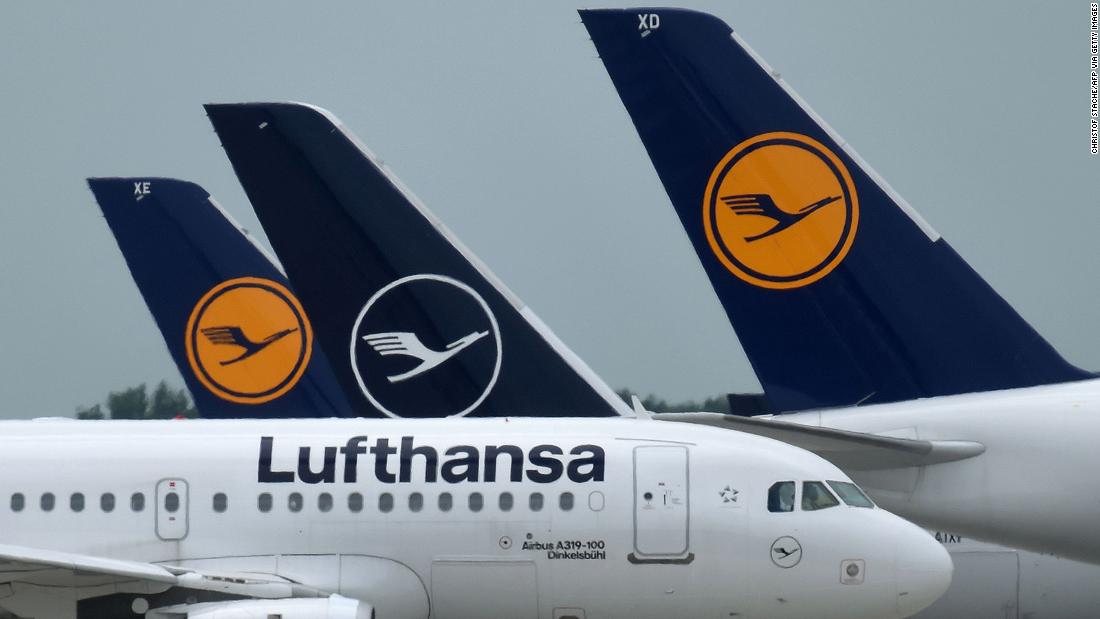 Passengers told CNN they flew Lufthansa from New York’s John F. Kennedy Airport to Frankfurt, intending to connect to a flight to Budapest for a religious pilgrimage on May 4.

Yitzy Halpern of New York said he was trying to board the flight when he and a number of other passengers recognizable as Jewish, who were not associated with his group, were told they would not be allowed to board.

Halpern said once the gate was closed, the airline announced their tickets to Budapest were canceled due to an incident that happened on the flight from JFK, which the airline told CNN included people not complying with mask rules or other crew member instructions.

Passengers told CNN that although they were not traveling as “a group,” they were treated as such by Lufthansa.

During the announcement, which was captured on video, an employee said, “You know why it was,” and passengers are heard yelling back, “No, we don’t.”

Lufthansa said it is contacting passengers and has apologized for “not only for the inconvenience, but also for the offense caused and personal impact.” A spokesperson told CNN the airline is conducting an internal review.

In video of the incident, posted to the website Dan’s Deals, passengers accuse the airline and German police, who were at the departure gate, of anti-Semitism.

At one point, in a heated exchange, a passenger who is not visible to the camera or identified can be heard calling a police officer a “Nazi.” Another passenger tells a police officer guarding the gate: “Your grandparents would be proud.”

Halpern is heard saying: “I’m not with the group. I understand that pilot made a decision and we don’t question the pilot’s decision but apparently, we’re banned from the other Lufthansa flights… Is this a Lufthansa decision , that all Jewish people that were on that flight can’t go on any other flight today?”

Halpern asks to speak to upper management and continues to question the decision.

“I was wearing a mask the whole time. Why am I lumped in with them?” he asks the employee.

“Everybody has to pay for a couples,” the employee says a few seconds later.

When Halpern asks for clarification of what “everybody” means, the employee replies, “Because it’s Jewish coming from JFK.”

Halpern and the employee, who is speaking in broken English, continue to go back and forth, and then the employee is heard saying, “Jewish people were the mess, who made the problems.”

“So Jewish people on the plane made the problems so all Jews are banned from Lufthansa for the day?” Halpern asks.

“Just for this flight,” the employee replies.

Three passengers CNN reported not seeing anything out of the ordinary on the flight from JFK and said the passengers they saw complied with airline staff directions to adjust their masks.

Yitzy Schmidt, who was traveling with Halpern, told CNN he did not witness any wrongdoing on the part of the passengers. Schmidt said there were a few times people ate and forgot to put their masks back on, or a passenger was told to adjust their mask, but everyone the flight attendant complied with what the flight attendants said.

“We were all stunned and trying to get clarification of how something like this could happen,” Schmidt said.

Lufthansa apologizes, says decision was based on ‘non-compliance’

“The reasoning for the decision was based upon various instances of non-compliance by numerous guests with mask requirements and crew-safety instructions on the previous flight LH401 from New York to Frankfurt,” airline spokesperson Tal Muscal told CNN in a statement. “Lufthansa regrets the circumstances surrounding the decision to exclude the passengers affected from the flight, for which Lufthansa sincerely apologizes.”

“What transpired is not consistent with Lufthansa’s policies or values. We have zero tolerance for racism, anti-Semitism and discrimination of any type,” Muscal said. “While Lufthansa is still reviewing the facts and circumstances of that day, we regret that the large group was denied boarding rather than limiting it to the non-compliant guests.”

Muscal said he is not aware of any disciplinary actions.

Lufthansa CEO Carsten Spohr told employees what happened was not acceptable, according to a German news report confirmed by Muscal.

“Anti-Semitism has no place at Lufthansa,” Spohr said. “The procedure last Wednesday should not have happened like this and must now be fully clarified.”

Earlier on Wednesday he spoke with a Jewish leader in Berlin in a video call.

“We are in detailed analysis (for) days how this could have happened. What exactly has happened. We talked to our various crew members by now. We talked to the business the ground. It’s obvious. That’s why we apologized,” Spohr told the Rabbi. “This is nowhere in line with our rules of communication and rules of behavior.”

‘It was some type of unacceptable selection’

At least two Jewish men were allowed to board the flight to Budapest.

Max Weingarten tells CNN he and his business partner flew in first class from JFK to Frankfurt with no issue and was allowed onto the next flight.

His business partner was stopped when boarding but was eventually allowed onboard after a discussion with the airline staff.

“We don’t dress like ultraorthodox, we looked like regular civilians,” he told CNN. “The selection of Jews versus non-Jews or the selection between Jews is horrifying. It was some type of unacceptable selection that was done. I felt completely uncomfortable.”

German politician Marlene Schönberger said if the accounts prove true, there must be consequences.

“Excluding Jews from a flight because they were recognizable as Jewish is a scandal. I expect German companies in particular to be aware of anti-Semitism,” she tweeted.

The German state of Hesse’s Jewish life and fight against anti-Semitism commissioner Uwe Becker demanded an apology and clarification from Lufthansa.

“Here, an entire group of people was obviously made responsible for something that obviously only affected individual travelers, solely because of their recognizable faith. This is discriminatory and not a trivial matter,” he said.

Correction: An earlier version of this story gave the wrong date for the religious pilgrimage. It was May 4.