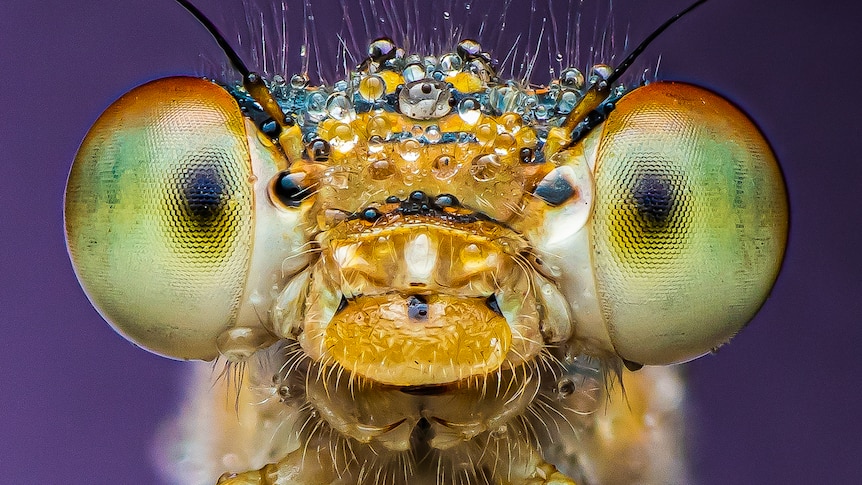 When Flynn Prall started working in the bush all day as a trainee conservationist, he began to take notice of the tiny creatures around him.

He was so intrigued that when his day job with Mandurah council finished he’d head back to the bush — but this time with his trusty camera in hand.

His fascination with insects peaked when he spent hours watching a white-tailed spider try many different methods to trick a black spider to come out of its web.

“I realized there’s a lot more to these things,” the 25-year-old said.

A usual day for Mr Prall and his friends is picking a piece of bushland they’ve never been to, walking the trails, and then scanning the grounds and branches in the hope of finding some insects ready for their close-up photo shoot.

All these insects are visible to the naked eye, but Mr Prall said his magnified lens showed people a new perspective.

“All of them are usually [visible]but a lot of the details you can see in my photos are not,” he said.

“It’s really cool to hear from people that because of my photos they don’t kill spiders anymore.”

A savior to science

Not only do Mr Prall’s photos catch the eyes of ordinary people, but they’re also helpful to science.

“A lot of the time you go out and you take a photo of something, you’ll come back and send it to a few groups of scientists, and half the time no-one’s seen it before,” he said.

“It’s always awesome when you send a photo off to a scientist and they respond in all capitals freaking out.”

Just recently, this was the case with a photo Mr Prall took of a peacock spider, which he describes as his favorite encounter.

Another spider enthusiast James McMulkin and Mr Prall sent their photos through to biologist and peacock spider expert Jurgen Otto, who confirmed the species maratus nubilis had not yet been identified.

Mr Prall said peacock spiders could be found all over Western Australia.

“We’ve got peacock spiders in our sand dunes, one [species] that’s only found on Bluff Knoll, which is around 1,000 meters above sea level, which is just nuts,” he said.

“Now my friends and I are heading up to Kalbarri to find one that’s only found at Nature’s Window — so they’re just everywhere.”

“Anyone can really help, you’ve just got to walk into local bushland and see what you can find,” he said.

Recently two other new species of peacock spiders were discovered by citizens who unintentionally came across them in Western Australia’s south.

Paul Winthrop, a construction manager, was searching for spider orchids between Margaret River and Nannup when he got distracted by a weevil.

Next thing he knew a tiny little insect jumped at him.

Within the hour Dr Otto had contacted Mr Winthrop him telling him he had discovered a new species – maratus pinniger.

“I’ve been reading up on peacock spiders for the last year or so and spent a lot of time out in the bush looking for other things, so to find one and for it to be a new species was just fantastic,” he said .

Michelle Peak, a service station manager, was searching for a glimpse of a peacock spider, and on her third try she finally stumbled across one in Jalbarragup.

Thrilled she got to see one, she snapped a photo only to find out she discovered a new species – maratus candens.

“It probably took a few days to properly sink in … but it was so exciting,” she said.

Dr Otto said the last season had been exceptionally productive thanks to four amateur photographers.

“Without them I would not have been able to photograph, film and describe a single new species in the last 12 months, let alone the three species that we ended up with,” he said.

ABC Great Southern will deliver a wrap of the week’s news, stories and photos every Thursday. Sign up here.