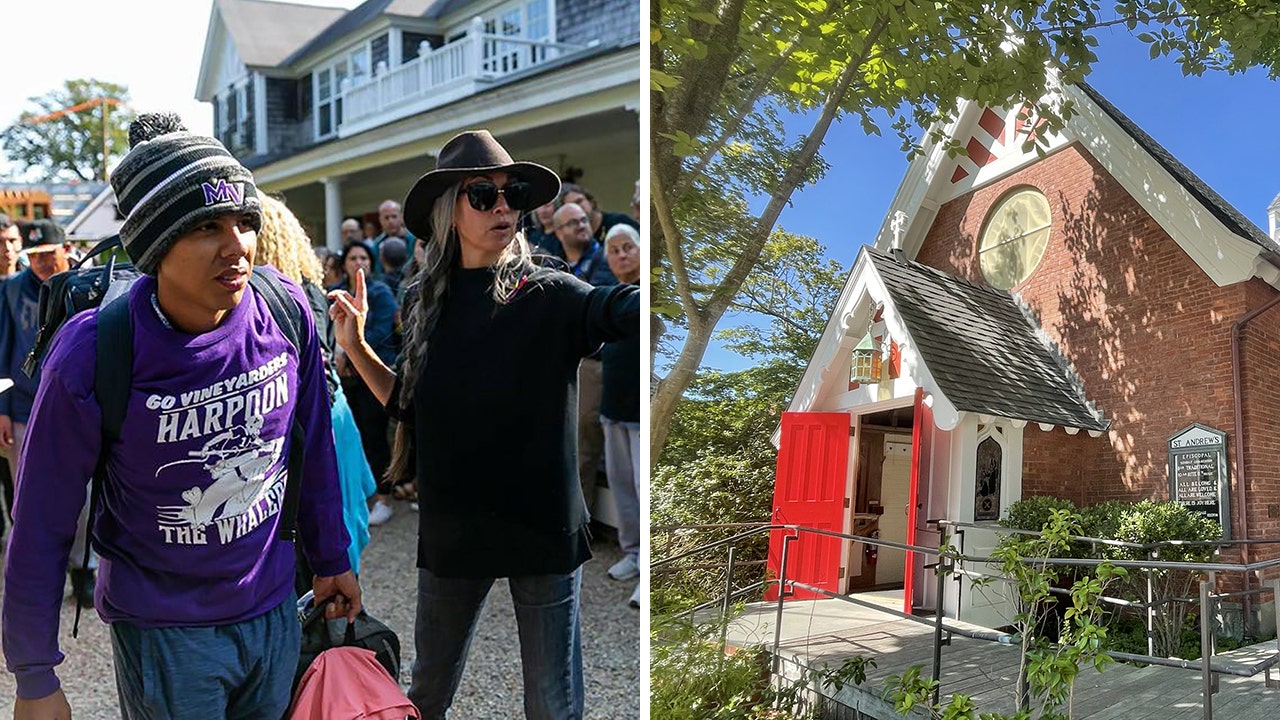 At least one group on Martha’s Vineyard rallied to aid the 50 migrants who touched down on the island for two nights — less than 48 hours all told — last week.

The unexpected visitors spent two nights taking shelter in the rectory hall of St. Andrew’s Episcopal Church in Edgartown, Mass., and were cared for by its members.

“There were people who needed help and the mission of our church is to help people in need, to do what Christians are supposed to do,” church warden Barbara Rush told Fox News Digital.

When the migrants arrived, authorities called Rev. Father Chip Seadale — but he was off-island, Rush said.

So she sprang into action to rally support for the migrants from church members and others in the community, she said.

St. Andrew’s Episcopal Church in Edgartown, Mass. on Martha’s Vineyard welcomed 50 migrants into its care when those individuals arrived on the island on Sept. 14, 2022.
(Kerry J. Byrne/Fox News Digital)

“They [the authorities] asked if the church could take in some of the migrants,” parish musician Charles Rus told Fox New Digital.

The 50 migrants spent two nights on the island before state authorities had them bussed and ferried to Joint Base Otis on Cape Cod, on the Massachusetts mainland.

“There were people who needed help and the mission of our church is to help people in need, to do what Christians are supposed to do.”

Rush said the island of Martha’s Vineyard is not equipped to provide long-term care to the migrants who had been flown from Florida to the island a week ago.

MARTHA’S VINEYARD MERCHANT SAYS THERE’S A ‘PROCESS’ FOR COMING TO AMERICA, ‘FOLLOW THAT’

The island’s lone homeless shelter, she noted, runs only in the winter. It has space for only five to 10 people.

A migrant, at left, is directed forward on Martha’s Vineyard. At right, the exterior of St. Andrew’s Church is pictured. “I can do what God is calling me to do as a rector of a church,” said Fr. Seadale.
(Left image: Matias J. Ocner/Miami Herald/Tribune News Service via Getty Images; right image: Kerry J. Byrne/Fox News Digital)

“I think everything happened so fast, I don’t think long-term plans were even discussed,” said Rush.

Fr. Seadale told Fox News Digital in a phone interview on Tuesday that he was away at a conference in North Carolina while the migrants were in Martha’s Vineyard.

He was nevertheless moved by the community response.

Calling it “an incredible miracle,” he said that “all the sectors of the community — we’re talking police, emergency, fire, the people who know how to make meals for our winter community suppers, the people who help to staff our overnight winter shelter program — they all came out and knew exactly what they needed to do.”

Fr. Seadale also said that “at the heart of all that” was the drive to make sure that whatever community members did, “they remained accessible to real people who were really hurting and traumatized in their lives.”

This was, he said, to show the migrants “what a community based on caring and love looks like.”

Victorian gingerbread cottages in Oak Bluffs, on Martha’s Vineyard. Fr. Chip Seadale said that the community aimed to “do the best with what we’ve got” to help the migrants.
(Photo by John Greim/LightRocket via Getty Images)

He said that the community’s response will also “give them hope for the balance of their journeys — which, by the way, are not over by a long shot.”

“Unless you’re really living here, you don’t understand how things work,” he explained.

MARTHA’S VINEYARD RESIDENTS LAMENT LACK OF RESOURCES, EVEN AS ISLANDS IS FLUSH WITH CASH AND BEDS

“Everybody has a different way of doing things,” he said, noting economic, socioeconomic, governmental and private ownership concerns.

A man who was among a group of immigrants to arrive on Martha’s Vineyard flashed a thumbs-up on Wednesday, Sept. 14, 2022, in Edgartown, Mass.
(Ray Ewing/Vineyard Gazette via AP)

Fr. Seadale said that he realized right away that his church dele had the ability, temporarily, to house all of the migrants — and, as a rector, he had to do what he could.

“I can’t fix the immigrant legislation in the United States of America,” he said. “I can’t help [Gov.] Greg Abbott and [Gov.] Ron DeSantis with their issues in their respective states — knowing that they have issues that they’ve been dealing with for years now, on the borders.”

He added, “But I can do what God is calling me to do as a rector of a church, and reach out and say, ‘You know what? I know you’re stuck in something that’s bigger than you.'”

It was “kind of strange” to watch his small church “become part of a national issue,” he said.

By housing the migrants, Fr. Seadale said that Martha’s Vineyard residents aimed to prevent them from “really getting caught up in the machinery of these things and sometimes, chewed up and spit out.”

He said that would likely happen “unless others like me and [the community] step in and say, ‘You know what? We can do what we can.'”