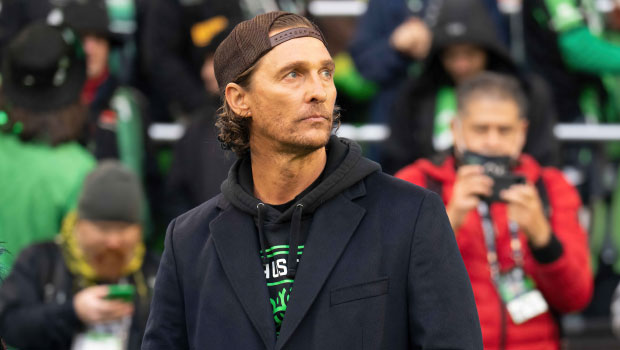 Matthew McConaughey returned to his hometown of Uvalde, Texas on Friday, May 27 to pay his respects to the victims of the Robb Elementary school shooting massacre. The Oscar winner, whose mother taught at a school one mile away from the tragic scene where 19 children and two teachers were slaughtered by an 18-year-old gunman, visited with school district officials and took photos with staff, but did not make any public statements at the time.

This week was a solemn reminder that evil exists in the world, but we will never let it break us. We’ll unite to be an even more powerful reminder that love never fails & together we can change things.

McConaughey was accompanied by local Republican congressman Tony Gonzales, who shared photos of the actor’s visit to Twitter on Friday, captioning it, “Appreciate Uvalde native Matthew McConaughey helping us heal.” Earlier Gonzales tweeted, “Thank you Matthew for helping to heal our community. Your visit brought so many smiling faces to Uvalde. See you soon my friend.” Gonzales is a staunch Second Amendment activist and has previously voted against two gun reform bills including one that called for expanded background checks.

Although McConaughey did not address the public during his visit, he was one of the first high-profile celebrities to make a statement shortly after news broke of the horrific tragedy. “Once again we have tragically proven that we are failing to be responsible for the rights our freedoms grant us,” he wrote on Instagram. “As Americans, Texans, mother and fathers, it’s time we re-evaluate, and renegotiate our wants from our needs,” he continued. “We have to rearrange our values ​​and find a common ground above this devastating American reality that has tragically become our children’s issue.”

Matthew McConaughey: Pics Of The Actor

The Dallas Buyer’s Club star’s return to his hometown follows the surprise visit on Thursday by the Duchess of Sussex Meghan Markle, where she laid white flowers at a makeshift memorial for the victims and donated food to the blood drive. Other celebrities, such as Kim Kardashian, Selena Gomez and Halle Berrysent their condolences to the victims’ families and spoke out about the gun violence in the wake of the deadliest school shooting since Sandy Hook Elementary in Connecticut in 2012.

Matthew McConaughey’s Wife: Everything To Know About Camila Alves