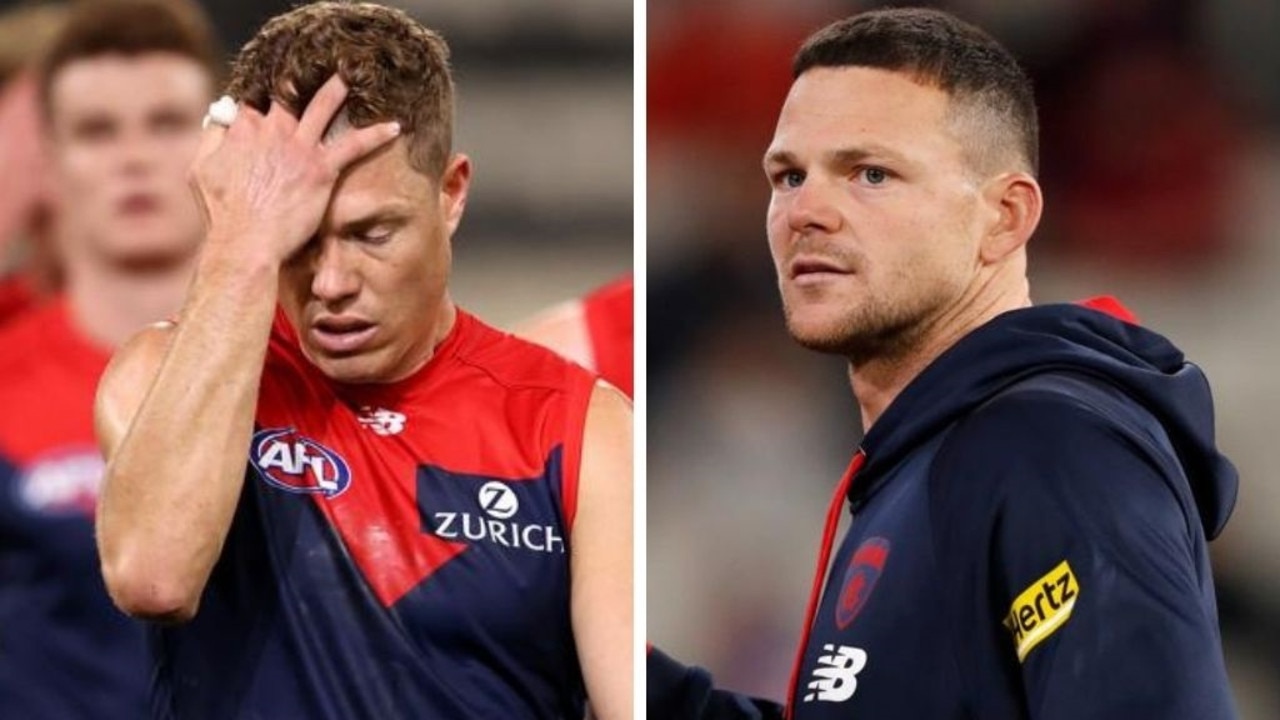 Steven May has been suspended by Melbourne after getting into a scuffle with a teammate while drinking when he wasn’t supposed to.

Melbourne has suspended Steven May for getting in a “scuffle” with teammate Jake Melksham while drinking.

The key defender was out of action under the AFL’s concussion protocols and the club said he was aware he should not have been drinking.

The Herald Sun reports the altercation between May and Melksham took place on Sunday night at Melbourne’s upmarket Entrecote restaurant, where members of the team were eating dinner.

A witness told the publication the pair started to “fight” before the disagreement “spilt outside”.

“Following a dinner on Sunday evening, Jake and Steven informed us of a scuffle that took place after a lighthearted disagreement between the escalated pair,” Melbourne said in a statement.

“Both Jake and Steven had been drinking at dinner and are incredibly remorseful that things played out the way they did.

“Given Steven is still under the AFL concussion protocols from Round 11, he was aware that under club guidelines he should not have been drinking.

“The leadership group has recommended to impose a one-match ban on Steven, a decision which has been endorsed by the club’s broader leadership. This will make him unavailable for both AFL and VFL selection.

“Steven and Jake will also complete community service through one of the club’s community partners to ensure they understand the responsibility and impact they have as role models within the community.

“Over the past three years, Steven has developed into one of our most important on-field leaders, and while the impact of not having him available for selection is significant, what is more significant to us is our culture and the commitment we have to live by our values.

“Steven is extremely remorseful and accepts his actions were completely out of step with the expectations of the club and his teammates have of him. He accepts the sanction handed down and makes no excuse for his poor judgment.

“We are proud of the culture we have built over the past few years and while we are disappointed with Steven’s behavior, we back in his character and will support him to ensure he is armed to make better decisions for himself and the football club moving forward .”

The suspension means May will miss the Demons’ highly-anticipated contest against Collingwood on the Queen’s Birthday next Monday.

It isn’t the first time May has come under fire at the Demons in relation to drinking. After making the switch during the 2018 off-season from the Gold Coast Suns, May arrived out of shape and was hampered by injuries in his first season with Melbourne.

In the middle of a lacklustre 2019 season, the now Premiership defender was caught drinking on a Sunday afternoon, while rehabilitating from injury.

He fronted up to the playing group days later to apologise for his actions.