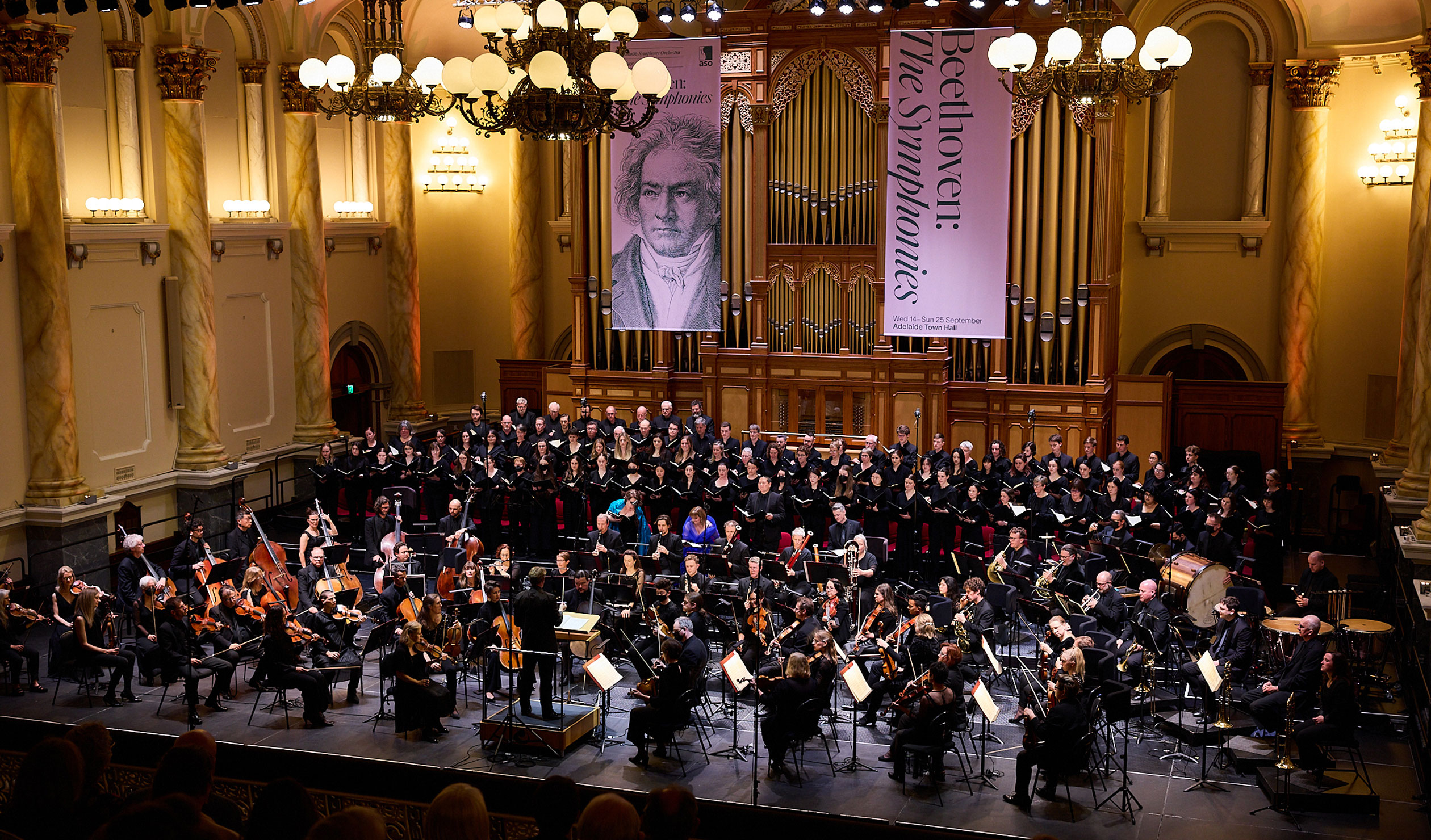 Conductor Douglas Boyd and the ASO have formed a remarkable symbiosis through the Beethoven series, and what a wonderful thing it has been to witness.

This was especially so in the eclipsing greatness of the Ninth Symphony (“Choral”) and its little brother, the Eighth, which too often hides in its shadows.

That eclipsing greatness can be a problem, insofar as Symphony No.9 in D minor, Op.125, tends to be burdened by its own institutional weight both within the Western artistic tradition and in the political sphere: one just has to think of how its call to brotherhood in the “Ode to Joy” has been used on numerous occasions for propaganda purposes (most odiously during the Third Reich).

All this can be extremely off-putting, and it’s truly enlightening when along comes a performance that, as it were, loosens the Ninth from these shackles of history and reveals the work itself. This is exactly what it felt like in this performance from Boyd and the ASO.

But first things first. Symphony No. 8 in F major, Op. 93, received an excellent and interpretively distinctive performance. His shortest symphony, Beethoven himself preferred it over the Seventh, and it was Stravinsky’s favorite. Significantly, it begins with no introduction (unlike its nearest of kin, the Fourth), but instead launches into a radiantly joyful main theme that in the hands of Herbert von Karajan and the Berlin Phil is a constant gushing of sound – and it’s a sound that hosts of conductors have emulated to a greater or lesser degree.

This performance, however, was so clipped and short that it was as if someone had put pruning shears to the score. All Beethoven’s carefully notated staccato marks and rests were there to be heard. The result was terrific rhythmic definition and energy: here was a lithe allegro first movement that conveyed the compressed vitality of Beethoven’s “little symphony”, as he called it.

So far so good. The bursting playfulness of the Eight proceeded like clockwork, each of the movements paying homage to Haydn and giving lie to Prokofiev’s Symphony No. 1 (“Classical”) being the first neo-classical symphony: Beethoven thought of the idea first, a century earlier.

But there can’t be a bigger test than his “Choral” Symphony, No. 9. The challenge is really to rescue this work from its own institutional weight, as previously suggested, and not smother it with a kind of imposed stateliness. This was a phenomenal performance, alive as much to its deep passion as its bristling irony. Irony in the Ninth? We’ll get to that.

…it was spine-tingling and electric

Good brisk times were part of it. One of Beethoven’s friends, the Viennese critic Friedrich August Kanne, once remarked that his “powerful tempos drag the listener along, as if in a torrent”; and Boyd duly set a brisk pace in the Allegro first movement that kept its restless energy pushing ahead, never pausing for niceties. The stark, bare fifths of its first notes were like an empty canvas upon which the play of human drama was painted in the boldest and wildest strokes. There was nothing reverential here: it was spine-tingling and electric.

Again, one admired how Boyd achieved it, by continually propelling rhythm forward and placing stridency ahead of smoothness. The effect was even more telling in the molto vivace second movement, surely the gruffest scherzo that Beethoven wrote. There’s one point where its internal Trio sails off into a distant pastoral world (recalling the Sixth in the process), only to be abruptly terminated by a return of the movement’s lacerating main theme – that’s the first dose of irony in the Ninth.

A lovely easy tempo allowed the slow movement (essentially a song and variations for orchestra) to gain the deep, rapturous beauty of this Adage. The woodwind glowed with warmth and the violins distinguished themselves with the most delicate playing. The extraordinary horn solo that appears in this movement, the significance of which scholars are yet to explain (beyond suggesting that Beethoven was experimenting with the early valved version of this instrument), was likewise impeccable. 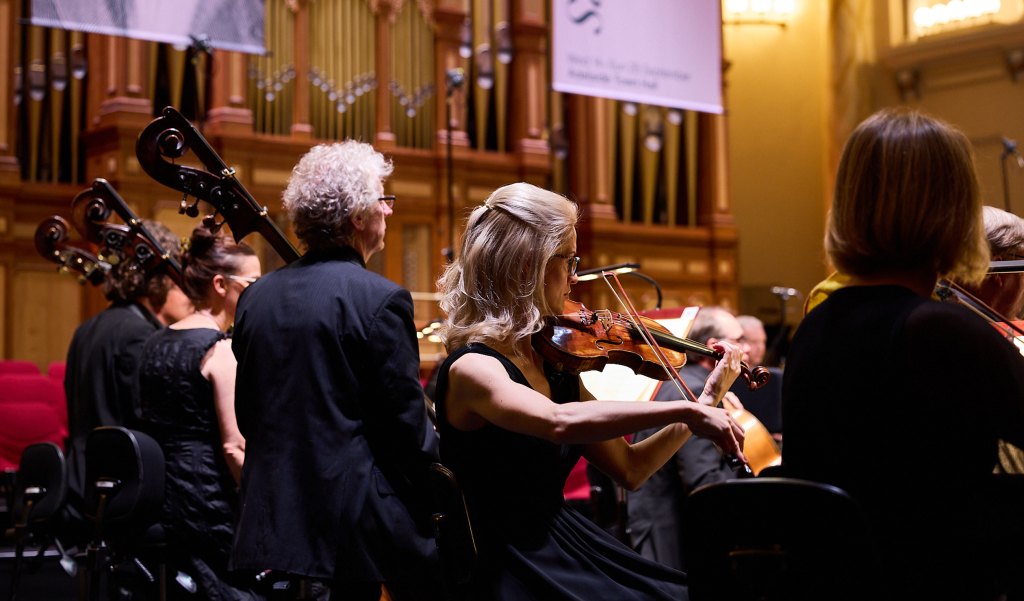 To confront the massive last movement, with its four solo singers and choir, always has one in awe. In Beethoven’s most ambitious design, the orchestra first summonses each of the preceding movements (by way of their main themes) and summarily rejects them; then the “Ode to Joy” lays the way to enlightenment. But it simultaneously enthrals and shocks: just when praises are sung to God, the bassoons emit rude burping noises that initiate a comic janissary march. The bizarre incongruity of all this even prompted criticism from Beethoven’s inner circle: his crowning irony dele is, of course, to cast doubt on all the ideals of brotherhood that he has just espoused.

We had here a most vital and gripping performance. Emma Matthews (soprano), Sally-Anne Russell (mezzo), Henry Choo (tenor) and Christopher Richardson (bass) sang their hearts out, and so did a vast sea of ​​choristers behind them that comprised the Elder Conservatorium Chorale and Graduate Singers. To hear this movement go full pelt was enormously thrilling.

This was a most wonderful and rewarding conclusion to the ASO’s journey through these symphonies. Boyd’s vision of this music is fresh, compelling and vital, the ASO has responded at its highest level with superb performances. Bravo to all.

Orchestras are hugely expensive operations to keep alive, and while we tend to view these canonical works as fixtures in our cultural landscape, there are no guarantees that they will keep being performed in a continually changing world. Thank you, ASO, for giving them to us.

The Adelaide Symphony Orchestra played Beethoven’s symphonies eight and nine at the Adelaide Town hall on September 24 and 25.