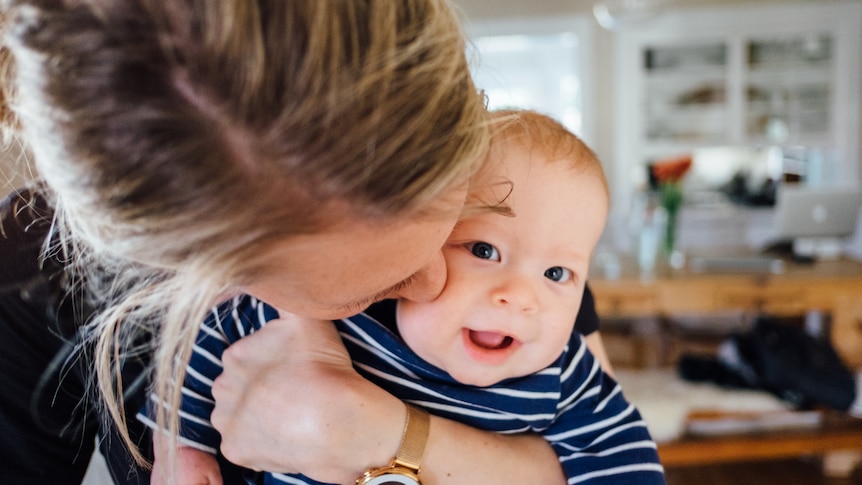 Amid the feelings of overwhelming love and joy that having a baby gives, more than 100,000 Australian mums each year also find themselves experiencing anxiety and depression.

Some even think their baby or partner would be better off if they weren’t around.

A recent episode You Can’t Ask That explored the personal experiences of women who had postnatal depression, revealing the trauma, sadness, fear and panic that many of them hardened in silence.

But in a world-first initiative, a digital screening tool has been developed to aid in the early diagnosis of postnatal depression and anxiety to help prevent further women from suffering alone.

The tool, known as iCOPE, is available in 12 languages.

In Victoria, the Warrnambool and Camperdown public hospitals in the state’s south west are among the first in the country to be using the potentially life-saving tool.

Melbourne-based Nicole Highet has spent her career studying perinatal mental health and is the founder and executive director of the Center of Perinatal Excellence (COPE), Australia’s peak body for reducing the impacts of post and prenatal depression and anxiety.

The center developed the iCOPE tool during COVID-19 when many women weren’t able to access their regular maternal health appointments.

Dr Highet said up until now, perinatal mental health screening had been “sporadic” across Australia.

She said part of the reason new mums did not speak up about their mental health was the ubiquitous pressure from social media to be a #yummymummy — to look beautiful and feel wonderful.

“There are a number of reasons why women don’t speak up early,” Dr Highet said.

“There are often high expectations that having a baby is supposed to be such a wonderful period of life. Everything is supposed to be beautiful and just like in the social media and the Instagram images,” she said.

“When people aren’t having those experiences, they often feel like they’re failing both as an individual and as a mother.”

Dr Highet said this could result in women feeling too ashamed to disclose their true experiences to their doctor.

She said that research had shown using a digital screening platform such as iCOPE gave women greater privacy and could be less confronting than telling a doctor how bad they were feeling inside.

After completing a series of questions, both the health professional and the patient receive a report that tells them what their results mean and where they can access help.

Motherhood is the most vulnerable time

Research from the Center of Perinatal Excellence shows that throughout a woman’s lifetime, she is most vulnerable to anxiety or depression when becoming a mum.

“We know that the time of having a baby has always been the most vulnerable time in terms of mental health conditions,” Dr Highet said.

Research also shows that more than 74 percent of these women aren’t seeking help until reaching a crisis point.

But seeking help at that time can sometimes be too late.

“We know that the leading cause of maternal death is suicide, and this is because these conditions aren’t identified,” she said.

Dr Highet said that the truth of becoming a new mum was that there were many unexpected challenges and many women went through them.

“Experiencing mental health problems, experiencing changes in your body image, having a birth that didn’t go to plan, dealing with sleep deprivation or a child which is unsettled, all of these different challenges can arise and have a significant impact on a woman’s well being and her mental health,” she said.

“People are left feeling like they are the only ones going through this.”

The new program is federally funded and will be provided to every hospital, GP, obstetrician and maternal and child health service across Australia.

Dr Highet said the reason it was being rolled out in the south west was thanks to the passion and interest from the local maternal and mental health providers who had been advocating to gain access to iCope.

“They’ve been waiting for it for a long time,” she said.

“The Warrnambool and Camperdown Hospitals are thrilled to become two of the first public hospitals in Victoria to use the iCOPE tool,” she said.

If you or someone you know is having difficulty adjusting to parenthood, visit the COPE website or call Perinatal Anxiety & Depression Australia (PANDA) 1300 726 306 for immediate help.