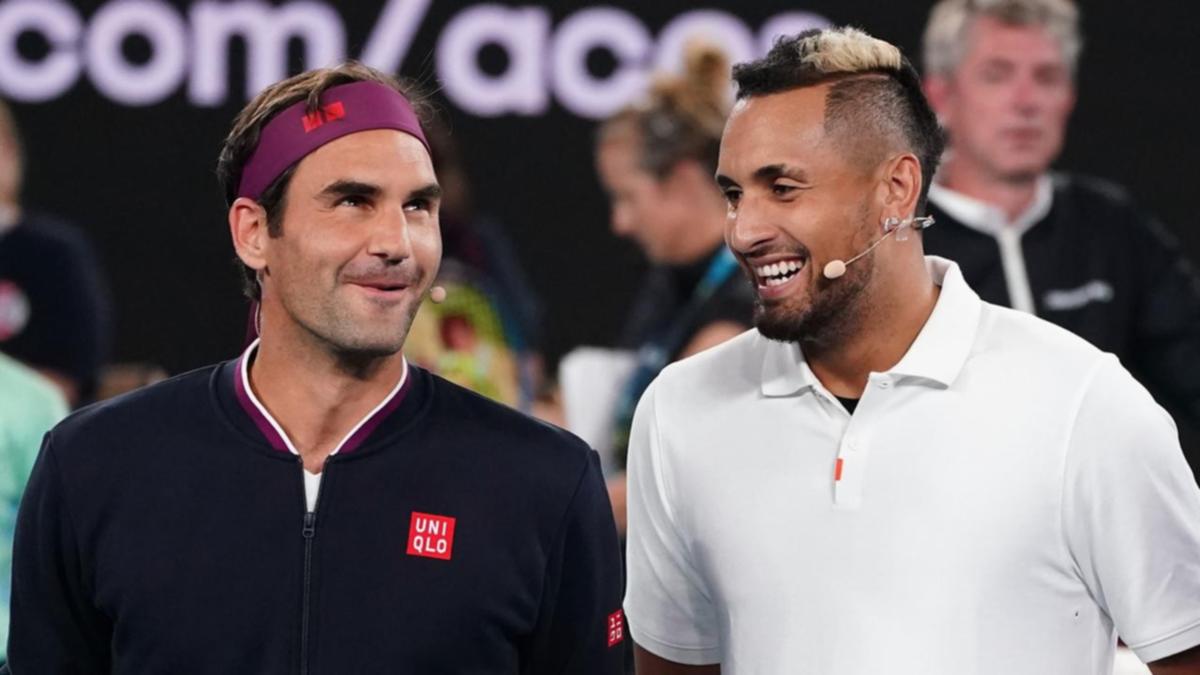 With a simple paean to Roger Federer’s greatness, Nick Kyrgios has joined the chorus of regrets, thanks and tributes following news of the great man’s impending retirement from tennis.

“No one will ever play the game like you,” Australia’s Wimbledon finalist declared in a social media address to Federer – and he was not alone as the game’s greatest players, headed by Novak Djokovic, continued the salutes to the Swiss maestro on Thursday.

WATCH THE VIDEO ABOVE: One of Roger Federer’s best shots ever.

Kyrgios, who’s never hidden how he believes Federer was even better than Djokovic and Rafael Nadal in the big three, added on his Instagram post: “Enjoy it @rogerfederer …… was an honor.”

Kyrgios had originally been down to play in what will now be Federer’s farewell competition, next week’s Laver Cup in London, but pulled out after his exhausting recent schedule in the US.

The Australian loves playing for the ‘world’ team against Europe’s best and had previously played Federer three times in the three-day competition – losing on each occasion.

After his Wimbledon final defeat by Djokovic, Kyrgios had noted: “He doesn’t make you feel as bad as Federer does at times.

“I think Federer, out of the three guys, can make you feel really bad, like he makes you want to leave the court. He can make things seem really quick and that the court’s really small.”

Djokovic will be part of Team Europe’s side in the event which starts next Friday, alongside the Serbian Wimbledon champ, Rafael Nadal and Andy Murray, who are reuniting one last time.

And before what seems bound to be an emotional occasion, at London’s O2 arena, Djokovic paid his own fond tribute to the Swiss, saying on Instagram: “Roger it’s hard to see this day and put into words all that we’ve shared in this sport together.

“Over a decade of incredible moments and battles to think back on. Your career has set the tone for what it means to achieve excellence and lead with integrity and poise.

“It’s an honor to know you on and off court, and for many more years to come.

“I know that this new chapter will hold amazing things for you, Mirka, the kids, all your loved ones, and Roger fans still have a lot to look forward to.

“From our family to yours, we wish you much joy, health, and prosperity in the future. Looking forward to celebrating your achievements and seeing you in London.”

Serena Williams also welcomed Federer to the “retirement club”, with his farewell to the sport coming so quickly after his extraordinary final bow at the US Open.

“I wanted to find the perfect way to say this, as you so eloquently put this game to rest – perfectly done, just like your career.

“I have always looked up to you and admired you. Our paths were always so similar, so much the same. You inspired countless millions and millions of people – including me – and we will never forget.

“I applaud you and look forward to all that you do in the future. Welcome to the retirement club. And thank you for being you.”

Venus Williams, hopefully not putting her sister’s nose out of joint, just chipped in on Instagram: “The greatest ever. Miss you already.”