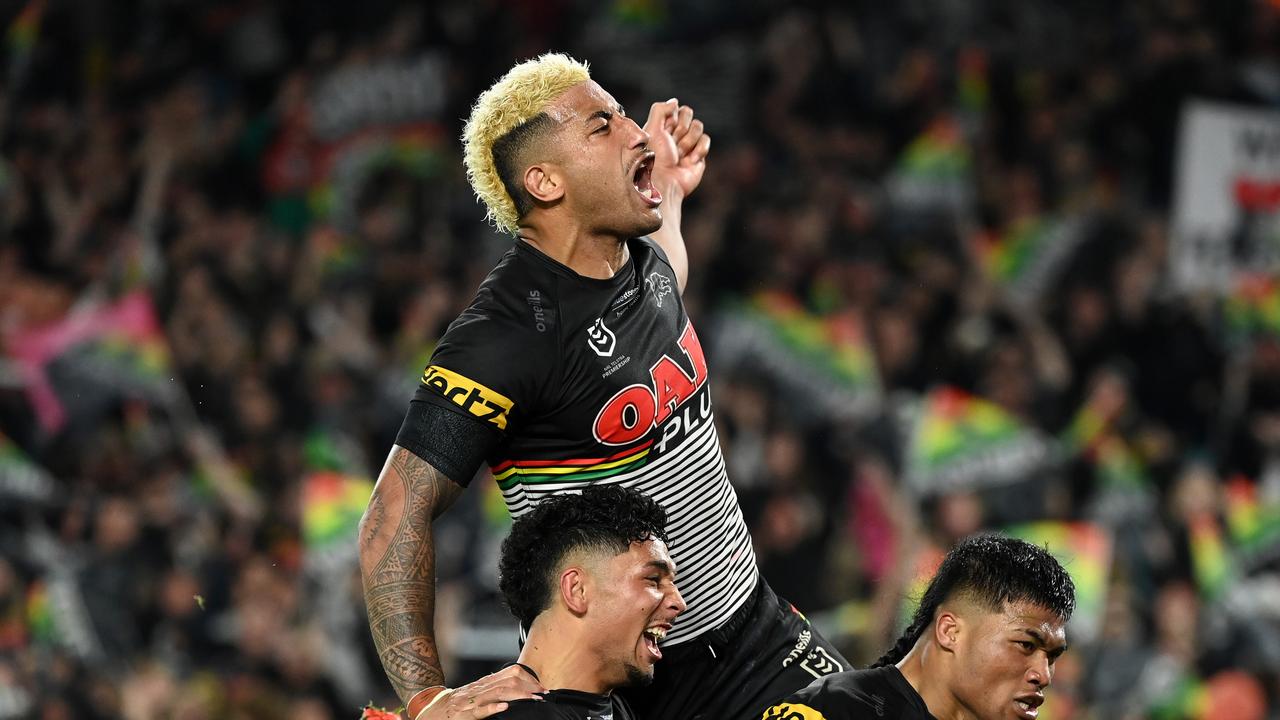 Viliame Kikau is free to play in next week’s grand final after he received a fine for his grade one shoulder charge on Campbell Graham, but there is a slight concern with the Panthers back-rower sporting a brace on his left hand after the game.

Kikau said he was fine after the preliminary final and that he would be right to take his place in next week’s decider, although his interview was cut short once the topic was brought up.

Coach Ivan Cleary also said winger Taylan May was a chance to return from a hamstring injury with a decision to be made by Wednesday.

A Panthers spokesperson confirmed Kikau carried the injury into the match and that the brace was purely precautionary and that there was no fracture.

The injury scare came on the same night he was placed on report for a tackle that went wrong in the first half.

“Those things happen in games. I just got off the line and tried to lead the team with defense and got it a little bit wrong.”

It means he’ll get one more match in Panthers colors before he makes the move to the Bulldogs next season.

And what a match it’ll be against their biggest rivals and closest neighbors, with western Sydney set to descend into chaos as battle lines are drawn between Penrith and Parramatta.

“I don’t think there’s anything bigger than this. It’s going to be a beauty,” Kikau said.

“Parra people hate Penrith, and Penrith people the same. It’s going to be a blockbuster. They’ve beaten us twice this year and we got them once so it’ll be another big one next week.

“There’s going to be a lot going on and the fans are going to be in the streets in Penrith and Parra. We just need to go through the week with everything that needs to be done and get ready for the game.

“I’m just going to stay at home this week (to avoid it all).”

While Kikau wants to avoid the mayhem this week, Parramatta players would be wise to steer clear of him in defense after the Fijian enforcer whacked any South Sydney player foolish enough to run at him on Saturday.

Defense was never a focus for Kikau when he was steamrolling guys with 21 tries in 21 games in the 2015 Holden Cup season, but it’s an area of ​​his game he’s been working on ever since he made the move south from the Cowboys.

He has been a nightmare for opposition halves with both his tackling and ability to charge the ball down, and he seems to get more physical as the games get more intense.

“Everyone knows that defense wins big games so it’s always a focus coming into big games,” he said.

“I came into the league and I was really good at attack, but my defense was just a bit off. It’s a bit harder in the NRL in the back row because you’ve got to make reads and stuff like that.

“I’m still learning a lot about the game. I’m a bit of an older head in this team – we’ve got a young squad – so I’ve been learning heaps throughout the years and I’m starting to get it right.

“I feel like I still have a long way to go, but I’m happy that what I’m doing at training is coming out in the games.”

Kikau and his comrades are getting ready for a third-straight grand final as talk of a Panthers dynasty gathers momentum.

But he won’t be there beyond this season, with the Belmore-bound back-rower set to leave the golden west as one of the best edge forwards in the world.

“I’m not really thinking about it too much,” he said of his looming departure.

“Every game this year I’ve played it like it’s my last, and obviously this is going to be the ‘last’ last next week.

“I’m going to give everything, and the goal is to keep my head calm through the week and don’t think about it too much.”

Originally published as ‘I got it wrong’: Panthers champion Viliame Kikau in doubt for grand final