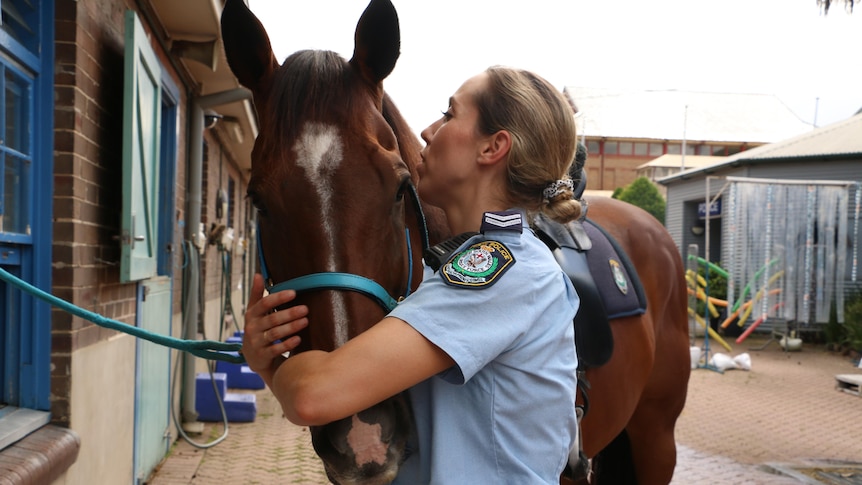 It is the longest-running mounted police unit in the world, but the first women only joined the New South Wales Mounted Police Unit in 1982.

Despite their slow start, women now dominate the unit—established in 1825—with 25 female officers to seven men.

Senior Constable Emma Dickens is one of those women.

She described the role as her dream job.

“I always had a massive love of horses, and it was my mum that actually suggested, ‘Maybe one day you might want to get paid to ride horses,'” she said.

She was training her horse, Martin, how to handle tough environments before he took anything as serious as a protest on, but she was learning just as much from him.

“I think you really get back what you put in, and I think of riding horses as a bit of a journey, the more you learn, the better you do,” she said.

“It’s really a career and a sport where you can never stop learning.”

She said it was special to be working with so many women in what used to be a male-dominated unit.

“I am really proud of the fact that we are a predominantly female-run unit,” Emma Dickens said.

Like many industries, it was a slow start for women in the NSW Police Force despite their hunger to be involved.

There were nearly 500 applications for the first two female positions advertised in 1915, but still, only two were appointed.

Those women were not issued a uniform, nor was the police department responsible for their safety after they signed an indemnity form.

More positions were advertised in 1941 because of wartime shortages, and more than 500 women applied, but only six were recruited, taking the total number of female police to 14.

Until 1961, policewomen were not allowed to stay employed at the force after they married, and guns were not a standard issue for all women officers until 1979.

One of the unit’s longest-serving officers, Sergeant Melinda Duncan, said a lot had changed since she joined in 1996.

“Originally when I came here there were a lot more men in the unit, probably half-half, and now it’s gotten to probably 80 per cent women and that’s a big change,” she said.

She said a push to get more women into male-dominated industries had helped.

“The police force itself has opened up to women, so a lot more women are joining,” she said.

“They are realizing the benefits of working with police.”

Women now make up more than 35 per cent of the force in NSW, after only being officially sworn in just 57 years ago.

But there was still a way to go to reach equality, with the force working towards a target of 50 per cent policewomen.