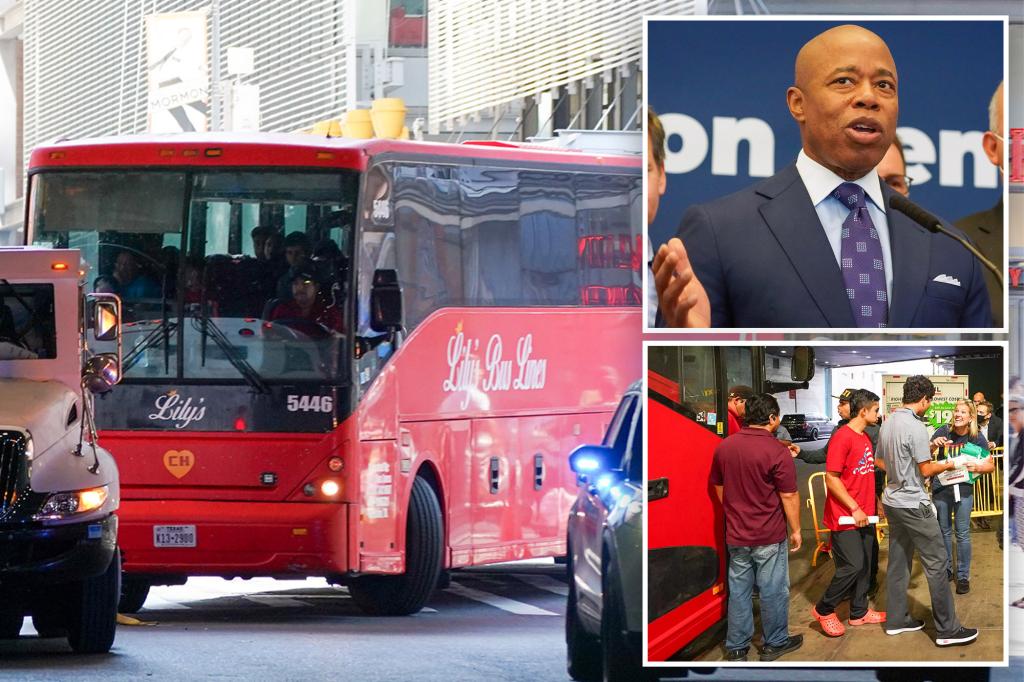 The deal — which sees the city embrace as many as 200 new arrivals a day — also came as Adams repeatedly blamed the ongoing influx of migrants for overwhelming the city’s shelter system, which he said Wednesday was “nearing its breaking point.”

Officials in El Paso, Texas, began sending migrants to New York City on Aug. 23 while trying to deal with a flood of asylum-seekers that one local pol has said created “a scene that you would see in a third-world country.”

As of Wednesday, El Paso’s Office of Emergency Management had paid for 33 charter buses to travel here, a spokeswoman for the Texas city said.

On Thursday, The Post saw two buses from El Paso arrive outside the Port Authority Bus Terminal in Midtown Manhattan and drop off scores of migrants.

El Paso Mayor Oscar Leeser said at a public meeting this week that he spoke to Adams about his decision to send a group of senior advisers to Texas last week on what City Hall called a “fact-finding mission to…get the real answers we’ re not getting from Texas.”

Leeser said that they discussed El Paso’s relocation program and that he told Adams most of the migrants being sent to New York were from Venezuela.

“We’re very thankful to Mayor Adams from New York who really stepped up to help us and, you know, he did tell me when I, when I spoke with him that there is not a community there within New York from Venezuela,” Leeser said at an El Paso City Council work session Monday.

“But he will welcome them into his community and then work with them to get them to a community where there is, there are peers, so they can continue to be there and that’s really important to him.”

Leeser said the influx of migrants to El Paso was “very manageable” when “we had two, three hundred a day.”

Migrant crisis moves North: Here’s what’s happening around the country as border states bus migrants around the US

“He has actually sent four people to El Paso to make sure they understood the process,” Leeser added.

Adams’ administration first found out that busloads of migrants were arriving from El Paso late last month, the El Paso Matters website reported at the time.

In April, Abbott began sending migrants to Washington, DC, to protest what he calls President Biden’s “irresponsible open-border policies” and their impact on border communities in the Lone Star State.

Abbott expanded the program to New York City in early August and on Aug. 31 announced that the first bus from Texas had arrived in Chicago.

All three cities are run by Democratic mayors.

“He is an anti-American governor that is really going against everything we stand for,” Adams said at a news conference last month.

In a response Friday, Adams spokesman Fabien Levy denied that the city had agreed to accept the migrants being sent from El Paso.

“As anyone who listens to the recording can hear, that’s not what the El Paso mayor said and Mayor Adams certainly didn’t offer to accept additional buses, let alone ever even intimate that.”

Levy added: “The truth is clear, we’re dealing with an unprecedented crisis that has pushed our city’s system to near its breaking point.”

But City Hall also released a statement from Leeser that said, “We greatly appreciate the assistance and cooperation of Mayor Adams, his team and the people of New York as we address this developing situation that is changing on an hour-to-hour basis. ”

“We are also working with our federal counterparts and [nongovernmental organizations] as we work to treat all individuals humanely while following the laws of the United States,” the statement added.

Leeser, however, did not return a request for comment on the Adams in response to his statements at the council meeting.

Meanwhile, a charity worker who greeted the migrants arriving in the city from El Paso on Thursday blasted Adams’ administration for not doing enough.

“We are getting absolutely no help from the city,” said Power Malu, executive director of the Lower Manhattan-based nonprofit Artists Athletes Activists Inc.

City Hall didn’t respond to a request for comment on those remarks.