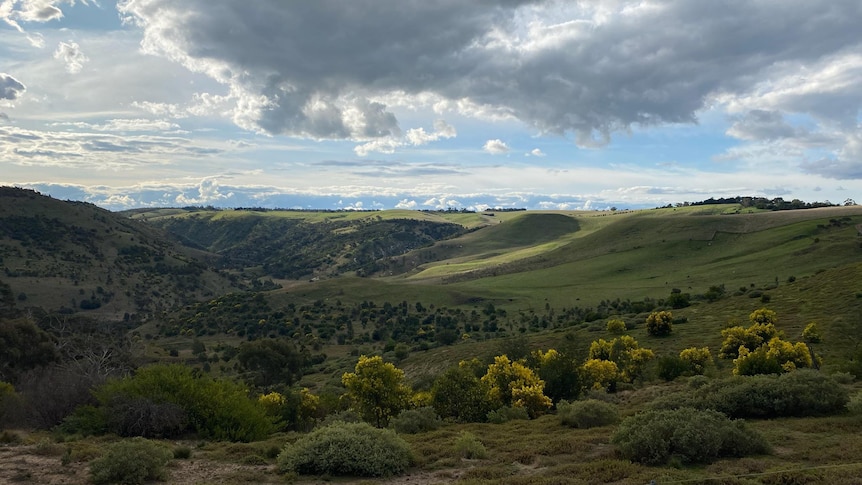 The Victorian Greens are calling on the state government to purchase a large portion of revegeted land listed for sale near Bacchus Marsh and extend the boundaries of an adjacent state park.

Conservation Volunteers Australia listed 230 hectares of land known as The Island for sale last month, saying it could not afford to keep the land after achieving its revegetation goal.

The large, hilly parcel of land next to Werribee Gorge State Park was donated to the group by James Whyte in 2006 and since then it has been transformed into an oasis of trees.

Members of local landcare groups who planted many of the hundreds of thousands of trees say they were blindsided and outraged to see the site listed for sale without any consultation.

“If you plant a tree, you feel committed to and connected to that land,” Pentland Hills Landcare Group treasurer Emma Muir said.

Many community members have shared concerns for The Island’s future, but Conservation Volunteers Australia chair David Clark says it will be permanently protected from development.

Two of the three titles of land for sale are permanently protected from development under a covenant by Trust for Nature and the third unprotected one can only be accessed via the other two.

Mr Clark told the ABC it was not financially viable for Conservation Volunteers Australia to continue maintaining the land at a cost of approximately $20,000 a year.

He said the group wanted to use funds from the sale of The Island to take on a new revegetation project.

“For us, logic says having done our part of the puzzle we now preserve that in perpetuity, pass it to another owner and we go on and do that again somewhere else,” Mr Clarke said.

Conservation Volunteers Australia has previously sold revegetated land in the Wimmera to Bank Australia, but believes The Island is more likely to attract the interest of a private buyer.

Ms Muir said it seemed unfair that the conservation group could sell land received as a gift for a profit, particularly given community investment.

“We put a lot of work and effort into there, people planted trees and gave up their time,” she said.

“We always thought they would be custodians of that land or gift it and it would become part of the state park.”

Greens candidate for Eureka Sam McColl said the state government should purchase the land to ensure community connections were maintained.

In addition to community tree planting, hikers use the Centenary Walk that runs through the property.

“The state government needs to act quickly on this — there needs to be investigations happening now if there isn’t already,” Mr McColl said.

“The one way we can ensure it is protected is if the state government purchased the land.”

The state government has confirmed there are no plans to expand Werribee Gorge State Park.

The ABC understands Trust For Nature has expressed an interest to the Department of Environment, Land, Water and Planning in extending the covenant to the third lot.

The state government said it has invested $10 million in a Nature Fund to complement funding commitments from private or philanthropic groups for biodiversity projects.

ABC Ballarat will deliver a wrap of the week’s news, stories and photos every Wednesday. Sign up to stay connected.