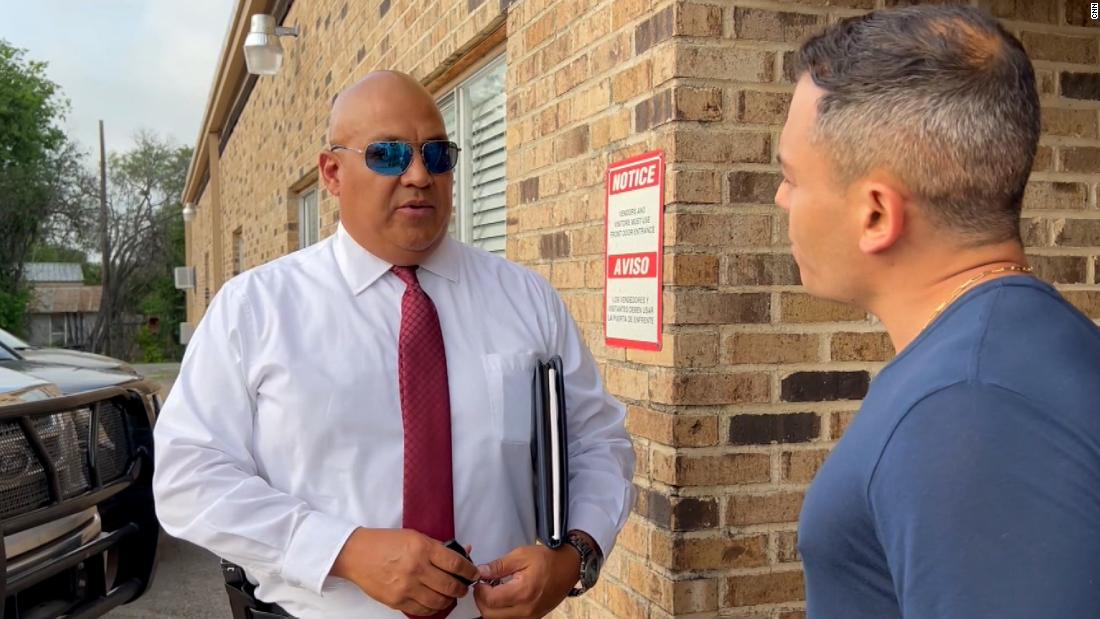 According to the Texas Department of Public Safety (DPS), Arredondo has not responded to a request for a follow-up interview with the Texas Rangers, who are investigating the shooting at Robb Elementary.

Yet outside his home Wednesday, Arredondo told CNN’s Aaron Cooper, “I am in contact with DPS everyday.”

And outside his office minutes later, he told CNN’s Shimon Prokupecz that he’s not going to release any further information while funerals are ongoing.

“We’re going to be respectful to the family,” he said. “We’re going to do that eventually. Whenever this is done and the families quit grieving, then we’ll do that obviously.”

It’s the first time Arredondo has commented since two brief press statements on the day of the attack, in which he said the gunman was dead but provided little information on the shooting, citing the ongoing investigation. He took no questions at the time and has not appeared in a public forum since.

Nineteen children and two teachers were killed in the attack last Tuesday, and officials have so far failed to answer major questions about why police took about 80 minutes to breach two locked classroom doors and confront the gunman.

The school police chief was identified last week by DPS as the commanding officer who decided not to force their way into the rooms and instead to stand back and wait for reinforcements — even as children repeatedly inside called 911 and begged police for help.

DPS Director Steven McCraw did not identify Arredondo by name, but he said the chief made the “wrong decision” not to engage with the gunman sooner. He said the commanding officer decided to treat the situation as a barricaded suspect rather than an active shooter.

Established law enforcement policy, created in the wake of the Columbine school shooting of 1999, calls for police to stop the gunman as fast as possible in an active shooter situation.

Arredondo has worked in law enforcement for nearly 30 years and became chief of police of the Uvalde Consolidated Independent School District (CISD) Police Department in March 2020.

Further, he completed an Advanced Law Enforcement Rapid Response Training (ALERRT) program Terrorism Response Tactics course in June 2019, according to the document. The ALERRT program is designed to teach officers techniques to save lives after an active shooting, such as how to apply tourniquets, according to the National Law Enforcement and Corrections Technology Center.

Arrendo sworn in to city council in secret ceremony

Arredondo was elected to the Uvalde city council earlier this month, and a special city council meeting to swear him and others in been set to take place Tuesday.

However, Mayor Don McLaughlin said in a statement Monday that the meeting “will not take place as scheduled,” adding “our focus on Tuesday is on our families who lost loved ones.”

Instead, Arredondo was sworn in privately without advance notice to the media. Although there was no formal ceremony, McLaughlin said that members of the council came to City Hall “at their convenience” during the day to be sworn in, adding that Arredondo appeared in person to receive the oath and sign paperwork.

“Out of respect for the families who buried their children today, and who are planning to bury their children in the next few days, no ceremony was held,” McLaughlin said in a written statement.

In his Monday statement, the mayor said Arredondo was “duly elected” and that there is “nothing in the City Charter, Election Code, or Texas Constitution that prohibits him from taking the oath of office. To our knowledge, not currently aware of any investigation of Mr. Arredondo.”

In his short comments Wednesday, Arredondo said the swearing-in was “a private thing” out of respect for the families, saying the families are the focus right now.