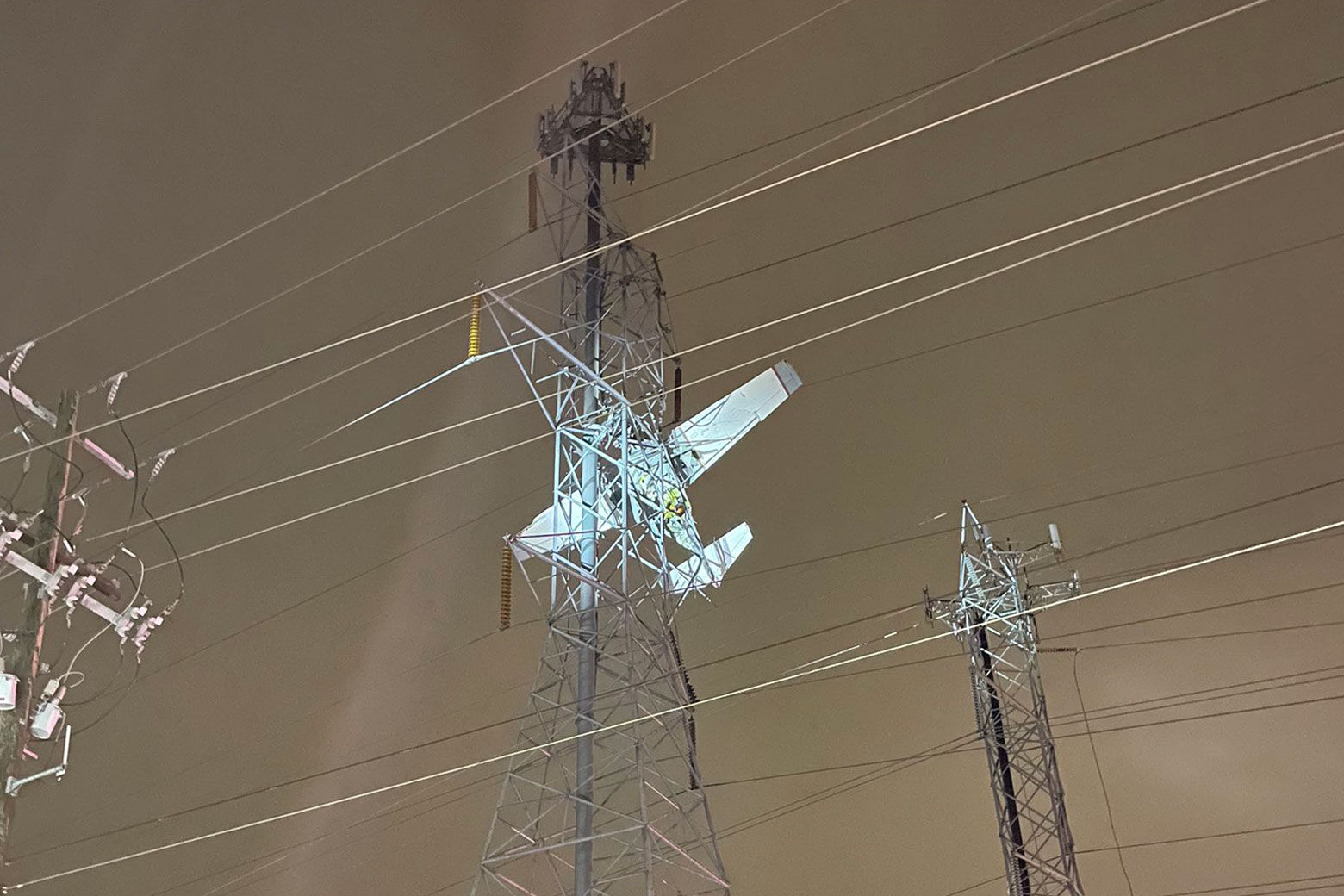 WTOP is hearing from the pilot and the rescuers in Sunday’s plane crash that involved a power transmission tower.

Patrick Merkle of DC has been flying for more than 30 years. And on Sunday night, he had hoped to conclude a day trip to New York with a friend at the Montgomery County Airpark in Gaithersburg.

But a few miles before the airport, Merkle’s plane crashed into a power transmission tower and left him and passenger Jan Williams injured and trapped 100 feet above the ground.

“For the first couple hours, I wasn’t sure that hanging on that tower was going to work, I was very concerned that we might be sliding off the tower and to our deaths, actually,” Merkle told WTOP.

Shortly after the crash, Merkle said he knocked out the plane’s front window and removed the dashboard from the plane, so if the plane started to fall, they could try to get out. He also kept his hand out the window and on the tower for a while, he said, with the hope that he could sense any movement of the plane early enough if they needed to escape.

“The longer we were in the air, the more confident I became of the way we had been attached to the trellis, if you will, the frame of the transmission tower,” Merkle said.

Both he and his passenger also called 911 and dispatchers. And later, first responders on the ground kept them updated on rescue efforts.

To get to Merkle and Williams, a rescue operation like no other had to take place, which included Pepco de-energizing the transmission lines and rescuers loading onto cranes to get close enough to the plane to get them out.

The plane had struck two transmission towers, including one to the north of the final crash site, and the first impact caused live high voltage wires to be severed. Merkle said it’s a miracle that the plane hit those lines in a way that didn’t ignite the plane.

“If we had touched live wires with the wings, we would have short-circuited 40,000 volts and had an explosive eruption of the fuel tanks,” Merkle said.

After being stuck on the plane for close to seven hours, both Merkle and Williams were rescued. Among Merkle’s injuries were a gash on his forehead and hairline fracture to his nose. He said he also lost 2 pints of blood from his head wound.

According to Merkle, Williams had several broken ribs as well as a forehead injury that required stitches.

The crash happened, Merkle said, when they flew through clouds and were too low on the approach to the airport. He said he was using the plane’s instrument landing system, something he’s done before in both practice and real life.

He credits the aircraft’s construction for his survival, too. Because despite the damage, the doors of the plane still opened. He likened the frame of the Mooney M20J to that of a NASCAR racing car.

“That has a lot to do with why we’re surviving this crash. I mean that and the miraculous placement of aircraft in the transmission tower,” Merkle said.

As an aviation enthusiast, Merkle said, he works a lot to build interest in flying, especially among kids, and he has helped many Boy Scouts get their aviation merit badge. His concern about him is what happened to him may negatively impact people’s view of flying small planes, at a time when he said airports are struggling to stay open with too few pilots using them.

“I feel very badly about having cast that unfair, you know, aspersion on general aviation when it’s just not true,” Merkle said.

Merkle said he is telling his story, for one big reason: To say thank you for first responders, those who got them out of the plane, and second responders, who he said were the medical teams who helped them once they were on the ground . Also, he said, they are thankful for the people he calls “third responders,” the thousands of people who went without power during their rescue.

“We are eternally grateful for the sacrifices everybody made coming out on the last night of the holiday weekend to rescue us by having their power shut down for I don’t even know how long,” Merkle said.

How the response began

On Sunday evening, Lt. Logan McGrane, of the Montgomery County Fire and Rescue in Maryland, reported a power outage at his firehouse in Aspen Hill to his chief. Generally, those are caused by simple things, such as a transformer blowing up around the corner. But the chief told McGrane that he wasn’t alone — power was out for miles around.

When the board of active calls showed a plane had crashed into a power transmission tower in Gaithersburg — about 10 miles away — he had an idea what he was up against.

McGrane coordinated the stabilization process and rescue efforts Sunday evening, and he can laugh about it now. Seven hours of prep, and countless training sessions before that, led to an ending that’s about as happy as you can expect.

He and other fire officials recounted their efforts at a news briefing on Wednesday.

‘Everything is dark on the way there’

McGrane and his crew headed out for the call — “everything is dark on the way there because all the power is out,” he remembered. “As we were approaching, the high tension power lines have just that unique cut straight down the line. So we’re coming down one of the roads and I look to the left down the power lines and you could see the plane stuck up in there.”

Lt. John Lann eventually helped get Merkle and Williams, both 66 years old, out of the plane. When he arrived on the scene, “The plane was actually moving, and then the pilot was trying to climb out the window.”

As time went on, he said, it became apparent the plane wasn’t going to fall. But even with the power out almost all over the county, the firefighters were warned that the power lines still had enough residual static electricity that touching them could be fatal.

That stayed on Lann’s mind when he got into the bucket and rode up to the plane: “When the experts tell me that it’s there then I have to believe what they say.”

Eventually, he said, all the power was removed from the line. “I’m not going to lie though: When we were going up and the power line was a foot from my head, I was ducking,” Lann said. “I didn’t want to find out.”

The way the plane hit the tower was a lucky break, with one of the wings and the plane’s engine helping to wedge the aircraft in.

That involved using the firefighters’ expertise in stabilizing things, Pepco’s expertise in the towers and what they could do to make sure the plane stayed stable. “We ended up anchoring the plane with some heavy rigging to the tower,” McGrane said, adding that it was sort of like keeping a four-legged table stabilized when only two of the legs were sound.

“You hope for the best,” said McGrane. “You know the equipment is rated for however much it’s rated for.”

No one specifically makes anchoring-a-plane-to-a-transmission-tower cable. There was no real way of testing the stability of everything that high up. Everyone had to trust their training, and there was no margin of error, the firefighters said.

“We were pretty confident,” McGrane added. “I was confident enough to put my guys up near that plane.”

‘Just stay where you’re at’

Once the plane was secured, firefighters had to get Williams and Merkle out. When Lann and Master Firefighter Luke Marlowe got up there, they said, it was clear that Williams’ injuries were significant enough that she had to go out first, and by herself, because of the cramped nature of the bucket.

“We removed the lady first and he was trying to come out right behind her,” Lann said. “I was like ‘Just stay where you’re at.’ I actually ended up closing the door to the fuselage, to the cockpit, and there was another bucket up there, and I had them move in closer so he couldn’t open it back up and try to come out.”

Otherwise, the conversation was pretty minimal — Marlowe described it as small talk more than anything. But he said that it was actually encouraging.

“Surprisingly they were pretty calm and pretty alert,” Marlowe said. “That was a great sign for us. We were able to get them out a lot easier [since] they were able to communicate and work with us.”

How it all happened isn’t something they got too deep into. Instead, it was all about getting out of it.

“We train for all types of different incidents,” Lann said. “If you think about the grand scale of this, it was a high-angle rescue; that’s one part of it. It was a stabilizing a piece; that’s another part of it, just — it was higher in the air. If you just break those components down into their simplest form, you can get through it and not let it overwhelm you.”

They had four plans, but the first one worked out successfully. “We brought a lot of different aspects of what we do all into one, and it worked out well,” said Lann.

“I didn’t think it’d actually be up that high,” Marlowe said, but being 100 feet off the ground was never really a concern for him.

“I looked down a little bit, but it was so foggy that night,” he recounted. “They said there were TV crews and a crowd to the right of us, but I couldn’t even see them because it was so foggy up there.”

“It kind of helped in its own way. I didn’t have to look down, but we felt secure,” said Marlowe, who added he isn’t scared of heights. “We train for this.”