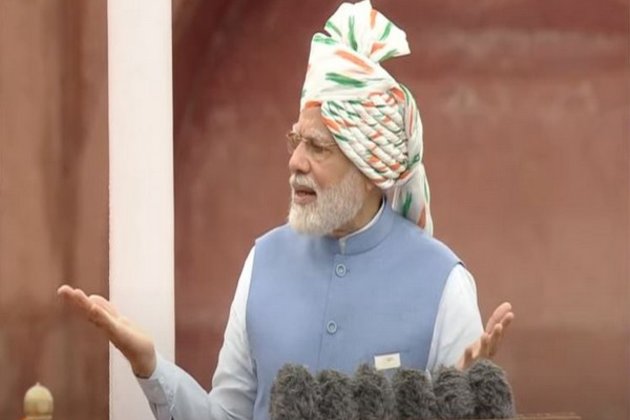 New Delhi [India]August 15 (ANI): Prime Minister Narendra Modi thanked leaders across the world who showered Indian leadership and its people with their wishes on the occasion of the 76th Independence Day on Monday which is being celebrated in the country under the banner of Azadi Ka Amrit Mahotsav.

French President Emmanuel Macron congratulated India on the occasion of its 76th Independence Day. “Dear friend @NarendraModi, dear people of India, congratulations on your Independence Day! As you proudly celebrate India’s stunning achievements in the past 75 years, you can count on France to always stand by your side,” he tweeted.

Thanking Macron, PM Modi wrote, “Touched by your Independence Day greetings, President @EmmanuelMacron. India truly cherishes its close relations with France. Ours is a bilateral partnership for global good.”Wishing India for completing 75 years of Independence, Prime Minister of Nepal Sher Bahadur Deuba wrote, “Hearty congratulations to PM Shri @narendramodi ji and people of India on the auspicious occasion of the Independence Day of India. My best wishes for the continued progress and prosperity of India. Spirit of friendship and cooperation will further deepen in the days to come.”Hoping that the India-Nepal friendship will continue to flourish in the years to come, PM Modi thanked the Nepali PM. “Thank you for the wishes, PM @SherBDeuba. May the India-Nepal friendship continue to flourish in the years to come,” he wrote.

Wishing all those marking India’s Independence Day a wonderful celebration, Albanese said in a statement, “All Australians applaud India’s successes, and the many achievements that define this great country and its people. We also give thanks for the contribution of our Indian-Australian community to our society, to our culture, to our country, and to the links between our nations.””The emergence of the world’s largest democracy and the achievements made by independent India have been remarkable,” Albanese further said in the statement.

Thanking him for his Independence Day wishes, PM Modi said, “The friendship between India and Australia has stood the test of time and has benefited both our peoples greatly.”Russian President Vladimir Putin congratulated Indian leadership and its people on the occasion of its 76th Independence Day. “Please accept warmest congratulations on the occasion of the 75th anniversary of India’s independence. Over the decades of independent development, your country has achieved universally recognized success in the economic, social, scientific, technical and other fields. India rightfully enjoys considerable prestige on the world stage and plays an important constructive role in resolving pressing issues on the international agenda,” he said while highlighting India’s importance in the world.

UK Prime Minister Boris Johnson also extended wishes to the people of India on the occasion and highlighted the thriving living bridge between the two countries.

“Congratulations to the people of India on 75 years of independence. During my recent visit to Gujarat and New Delhi I saw for myself the thriving Living Bridge between our countries. I look forward to seeing these bonds go from strength to strength in the next 75 years,” tweeted Johnson.

US President Joe Biden also extended wishes to India on the occasion. “As people around the world, including nearly four million proud Indian-Americans, celebrate the 75th anniversary of India’s independence on August 15, the United States joins the people of India to honor their democratic journey, guided by Mahatma Gandhi’s enduring message of truth and non-violence,” added the US President.

Meanwhile, the Embassy of Japan presented a vocal and instrumental rendition of India’s national anthem. The musical celebration of India completing 75 glorious years of independence was compiled by Japanese Embassy staff members comprising both Indian and Japanese nationals.”Namaskar, on the occasion of India having completed 75 years of her independence, I wish to express my sincere congratulations to the people of India. My Embassy staff members both Indian and Japanese will now present a joint performance of the national anthem of India to celebrate this happy occasion together. I hope you will enjoy it,” said the Japanese Ambassador to India Satoshi Suzuki in a video message.

Meanwhile, the Foreign Minister of Maldives, Abdulla Shahid also took to his Twitter handle and extended his warm wishes to his Indian counterpart, EAM S Jaishankar on the occasion of the 76th Independence Day in India.”Warm greetings and best wishes to my dear colleague EAM @DrSJaishankar, the Govt. and the friendly people of India on the jubilant occasion of the 75th anniversary of India’s independence,” he tweeted.This Mahotsav is dedicated to the people of India who have not only been instrumental in bringing India thus far in its evolutionary journey but also hold within them the power and potential to enable Prime Minister Narendra Modi’s vision of activating India 2.0, fueled by the spirit of Aatmanirbhar Bharat.Several events have been held over the last 75 weeks to celebrate the 75 years of India’s independence .While addressing the nation for the ninth time today from the Red Fort on the occasion of Independence Day, Prime Minister Narendra Modi urged the youth to dedicate th and next 25 years of their lives to the development of the nation and highlighted five resolutions to accomplish the same.Wearing a traditional tri-coloured motif safa (headgear) with a long trail, the Prime Minister who arrived at Red Fort after paying tribute to Mahatma Gandhi at his samadhi at Rajghat was received by Defense Minister Rajnath Singh and MoS Defense Ajay Bhatt. The Prime Minister recalled the contribution of the freedom fighters and emphasized the role of the women in the country’s freedom struggle.

It is worth mentioning that Indian citizens were not allowed to hoist the National Flag except on select occasions. This changed after a decade-long legal battle by industrialist Naveen Jindal culminated in the landmark SC judgment of 23 January 2004 declaring that the right to fly the National Flag freely with respect and dignity is a fundamental right of an Indian citizen within the meaning of Article 19(1) (a) of the Constitution of India. It defined the expression and manifestation of a citizen’s allegiance to and the sentiment of pride for the nation.

Lauding the Central Government and PM Modi for the Har Ghar Tiranga Campaign, Naveen Jindal has appealed to every Indian to make ‘Har Din Tiranga’ their motto. (ANI)