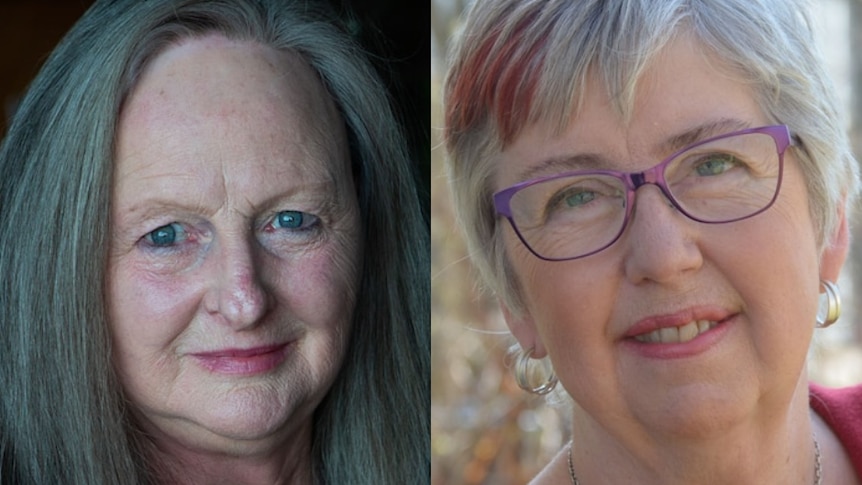 When Tasmanian poet Therese Corfiatis needs to get away, she only has to ask her Swedish friend, Britta Stenberg, for a screen-time tour of her snow-covered home.

The two poets have developed a close friendship via regular online video chats, despite living at opposite ends of the globe and never having met in person.

“I love it when she takes the laptop outside and swings it around — it can be minus 30 degrees there and the whole world outside her house is white,” Ms Corfiatis said.

But physical distance hasn’t stopped them from publishing a book of poetry together.

Bridge of Words is entirely the product of two new friends reading and responding to each other through the digital ether.

The juxtaposition of seasons and views

The pair were introduced by a mutual friend, Tom Langston, who died suddenly in 2020, just weeks before he was to receive an Order of Australia medal.

A renowned musician and teacher on the north-west coast of Tasmania, Mr Langston loved to host musical soirees and Ms Corfiatis often attended.

He had met Ms Stenberg on a Scandinavian holiday and thoughtfully suggested the two poets say hello across the globe.

“Britta messaged me and we started to video chat with each other, so the book is dedicated to Tom,” Ms Corfiatis said.

Both mothers, grandmothers and poets, they chatted first, then decided to write.

In the first year of COVID-19 lockdowns, they exchanged verse from the northern and southern hemispheres, reflecting on what was going on in their lives at any given point.

“When it was sunny here, it was minus 30 there so there’s a lovely juxtaposition of seasons, political views, relationships to people, to family,” Ms Corfiatis said.

“I sent a poem dealing with a magnificent sunny day — I think Christmas Day — in Ulverstone.

“So she sent one back about her Christmas in the frozen northern wastelands of Sweden.

“When she writes to me, she calls me sister and I do the same — and she is my northern sister.”

The power of language

Ms Corfiatis started writing as a child. She was part of a large family and said her migrant father often felt depressed and dispossessed.

“A famous writer once said that writing was an instrument of survival. For me it started as a diary,” she said.

“Later I discovered poetry. I always loved the power of language.

“I lived under Mt Wellington and was inspired by the beauty of seasons; that wildness, that deep spirit that’s in everything.”

There are now nine published collections of Ms Corfiatis’s poetry as well as four chapbooks and numerous contributions in anthologies.

Her first published writing was about the manner of her son Paul’s autism diagnosis and ran in the Adelaide Advertiser.

“When Paul was around two and a half, I noticed that he was different to other children at playgroup,” she said.

“The long and short of it is, he was diagnosed with autism in the early 1980s when probably one in 10,000 children were diagnosed.

“Our lives changed in many ways—and for the better.”

“I was just so shocked because a doctor had basically advised me to put Paul ‘to one side’ so that my family could continue on with their lives.

“I had to write about it. I knew that this beautiful little boy — and he truly was like an angel in human form — and the light shining out of his eyes … there had to be so much inside.

“And he’s a fine young man, now married and with a beautiful son of his own. A gifted musician.”

“He taught me to dig deep and find courage,” she said.

“While you’re working on advocating for their place in the world, your children are teaching you how to grow and accept the journey as it is.”

For the poet ‘sisters’ from opposite ends of the Earth, the next stage of their journey to lasting friendship is to finally meet in person.

“My feeling is that Therese and I are very, very close,” Ms Stenberg said via video link from Sweden.

“It has been exciting for me to get to know Tasmania and Therese.

“Bye-bye from Sweden, come and see me some day.”

Bridge of Words will be launched in Ulverstone on October 8 and Ms Corfiatis will be a guest poet at the Tasmanian Poetry Festival event at the Imperial Hotel, Branxholm, on September 17.