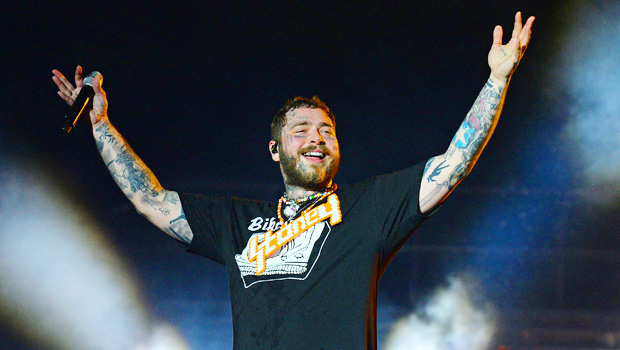 Post Malone is officially a dad….AND he’s engaged! The rapper dropped his exciting news during an interview with Howard Stern on June 13. Just one month after announcing his girlfriend’s pregnancy, Post confirmed that his mystery partner had given birth. The reveal was super subtle, as the Post just slid the information into the interview when Howard asked him what time he woke up and went to the studio the previous day.

“I woke up at 2:30. 2:30 in the afternoon,” he shared. “I went and kissed my baby girl and then I want and played some….” At that point, Howard cut him off though, asking him to clarify whether his “baby girl” was his girlfriend or his baby. “It’s my daughter,” Post confirmed.

Howard pointed out that this was news to him (and everyone listening). “Yeah, I want to let her make her own decisions,” the 26-year-old explained. Howard then asked a question about Post’s partner and had him clarify the status of their relationship. “She She’s my fiancee,” Post admitted, which was also new information. He has yet to reveal the identity of the mystery woman in his life dele, but clearly, things are going well!

At the beginning of May, Post Malone confirmed that he was expecting a baby for the first time. “I’m excited for this next chapter in my life,” he gushed. “I’m the happiest I’ve ever been and for since I could remember, I was sad. Time to take care of my body and my family and friends and spread as much love as we can every day.”

That doesn’t mean that his career is taking a backseat, though. Post also announced the 2022 tour with Roddy Rich on June 13. The tour kicks off in Nebraska on Sept. 9 and wraps up on Nov. 15 in Los Angeles after a two-month run across the United States.