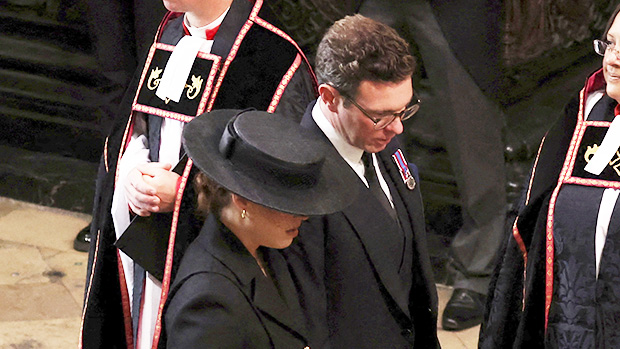 Princess Eugenie looked somber as she mourned her grandmother, Queen Elizabeth II, during the late Royal’s funeral on Sept. 19. Her husband, Jack Brooksbank, was by her side to offer support on the difficult day. Eugenie and Jack were joined by other members of the Royal Family to lay Queen Elizabeth II to rest 11 days after her passing her. They entered the church side-by-side as they made their way to their seats. Hundreds were in attendance for the service, and Eugenie and Jack sat near other members of their family in the front of the crowd.

Jack has been welcomed into the Royal Family for years, as he and Eugenie were a longtime couple when they got engaged in Jan. 2018. The two had been dating for seven years after meeting when Eugenie took a ski trip to Switzerland, where Jack was working. Eugenie and Jack tied the knot in Oct. 2018 in a wedding that was attended by members of the Royal Family. The couple’s son, August Philip Hawke Brooksbank, was born in Feb. 2021.

Eugenie is one of The Queen’s eight grandchildren. Her parents are Prince Andrew and Fergieand she is the younger sister of Princess Beatrice. Eugenie’s cousins ​​are Prince William and Prince Harryas well as Princess Anne’s kids, Peter Phillips and Zara Tindalland Prince Edward’s children, lady louise windsor and James, Viscount Severn. On Sept. 17, all eight of the cousins ​​stood united behind The Queen’s coffin for a 15-minute moment of respect that honored their grandmother.

All of the grandchildren were present for The Queen’s funeral on Sept. 19. Her Majesty passed away on Sept. 8 at Balmoral Castle in Scotland. After a mourning period, the official funeral was able to take place 11 days later. Thousands of people have gathered in the UK to visit The Queen’s coffin before over the past week before she was officially laid to rest.

Prince Andrew’s Kids: Everything To Know About Princesses Beatrice & Eugenie