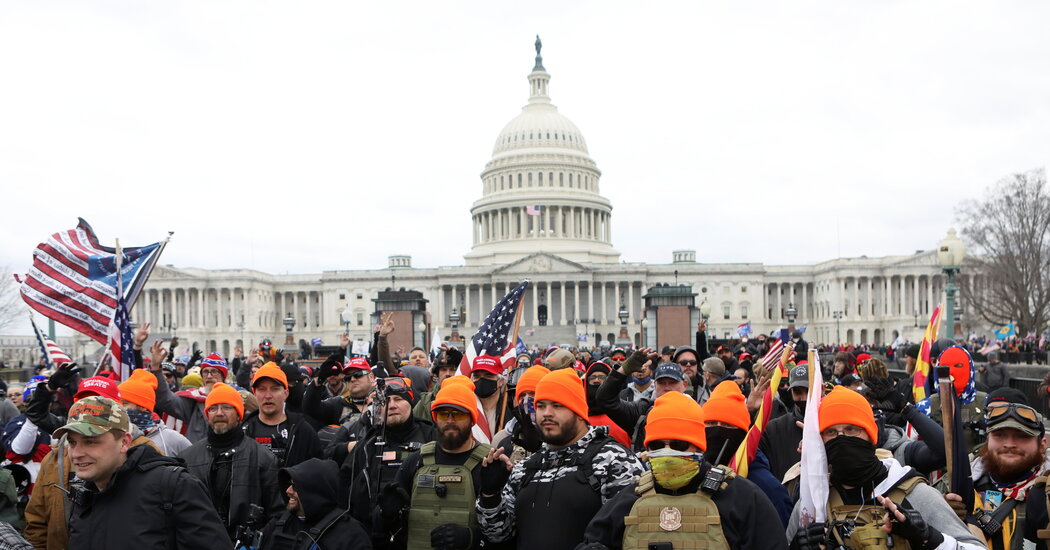 Enrique Tarrio, the former chairman of the Proud Boys, and four other members of the far-right group were indicted on Monday for seditious conspiracy in connection with the storming of the Capitol last January, the most serious criminal charges to be brought in the Justice Department’s sprawling investigation of the assault.

The sedition charges against Mr. Tarrio and his co-defenders — Joseph Biggs, Ethan Nordean, Zachary Rehl and Dominic Pezzola — came in an amended indictment that was unsealed in the Federal District Court in Washington. The men had already been charged in an earlier indictment filed in March with conspiring to obstruct the certification of the 2020 presidential election, which took place during the joint session of Congress on Jan. 6, 2021.

It was not immediately clear what evidence led to the new charges against the members of the Proud Boys, who were central in the effort to storm the Capitol and help forestall President Donald J. Trump’s defeat.

Another Proud Boy lieutenant who was originally charged with the men, Charles Donohoe, pleaded guilty in April and is cooperating with the government’s inquiry into the group. Around the time of Mr. Tarrio’s arrest this spring, federal investigators searched the homes — and seized the phones — of three other high-ranking Proud Boys identified as unindicted co-conspirators in the case, but none of them have been publicly charged.

The charge of seditious conspiracy requires prosecutors to prove that force was used either to overthrow the government or to interfere with the execution of federal law.

The only other defendants in the Capitol riot investigation to have faced a seditious conspiracy charge so far are Stewart Rhodes, the leader of the Oath Keepers militia, and 10 of his subordinates. Prosecutors say that Mr. Rhodes led a conspiracy to forcibly stop the lawful transition of presidential power by sending men into the Capitol on Jan. 6 and by establishing a heavily-armed “quick reaction force” outside of Washington that was prepared to rush to the aid of their compatriots at the building.

Unlike Mr. Rhodes, Mr. Tarrio was not in Washington on Jan. 6. He had been ordered to leave the city by a local judge two days earlier, after being charged with burning a Black Lives Matter banner at a church during a spree of violence that had followed a different pro-Trump rally in December.

Federal prosecutors have said that even though Mr. Tarrio was not accused of “physically taking part in the breach of the Capitol,” he had “led the advance planning and remained in contact with other members of the Proud Boys during” the storming of the building.

Prosecutors have claimed, for instance, that Mr. Tarrio had issued orders before the attack for members of the group to leave behind their traditional black-and-yellow polo shirts and remain “incognito” when they arrived in Washington on Jan. 6. Mr. Tarrio also helped create a “command and control structure” for the group on a private Telegram group chat called the Ministry of Self Defense, prosecutors say.

As the riot at the Capitol unfolded, Mr. Tarrio appeared to take credit for the Proud Boys’ role in what was happening. “We did this,” he wrote at one point on the Telegram group chat.

Lawyers for Mr. Tarrio and the other men have repeatedly claimed there is no evidence that they conspired in advance to storm the Capitol. By setting up a “Ministry of Self Defense” group chat and taking other measures like acquiring protective gear, the Proud Boys had simply been trying to guard themselves against leftist activists with whom they had scuffled before, at earlier events in Washington, the lawyers said .

The Proud Boys will also be featured when the House committee investigating Jan. 6 holds its initial public hearing Thursday night. The committee intends to present live testimony from Nick Quested, a documentary filmmaker who was embedded with the group during the riot, and from Caroline Edwards, a Capitol Police officer who was injured in an early assault that day said to have been triggered by the Proud boys.