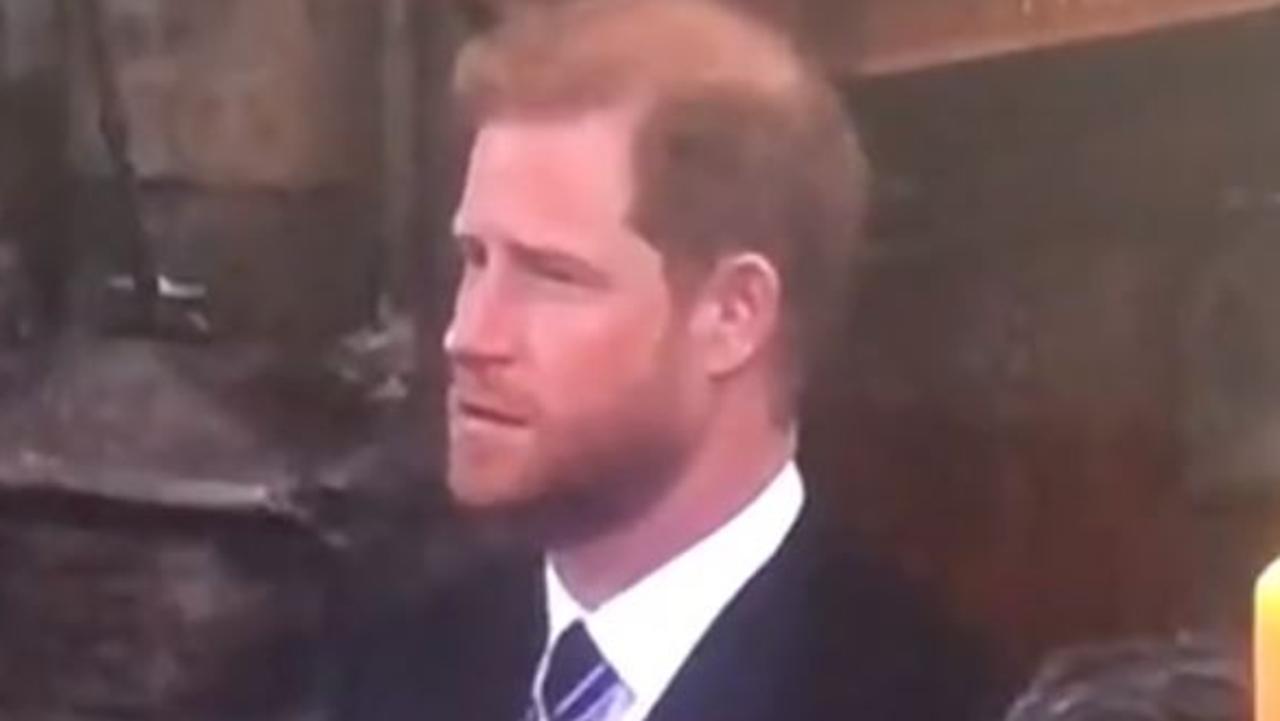 Eagle-eyed viewers tuning into the Queen’s funeral believe Prince Harry didn’t sing along to God Save the King.

Thousands of mourners attending Westminster Abbey paused to sing the British national anthem during the late monarch’s state service on Monday, with an 11-second viral video showing the Duke of Sussex seemingly not joining in.

King Charles III also wasn’t singing the words to the song, however the Queen didn’t sing the anthem either when it was about her.

Charles did sing the national ante when it was God Save the Queen.

And Harry used to sing the anthem when it was about his grandmother.

Camilla, the new Queen Consort, Princess Anne, Prince Andrew, Princess Beatrice and even American Meghan Markle (albeit, half her face is covered by a candle in the broadcast) are seen mouthing the words in the video from Westminster Abbey.

Royal watchers took to Twitter to accuse Harry, 37, of being “disrespectful”.

Harry and his wife Meghan, 41, were photographed with Charles for the first time in years last week.

Charles, 73, hosted an intimate gathering at Buckingham Palace to receive the Queen’s coffin, where he was photographed with the Sussexes.

However, the trio were separated in the rare photo.

Harry and Meghan have publicly spoken out against the royals since they moved to the US in early 2020, making particularly strong comments about Harry’s estrangement from Charles.

In the couple’s bombshell interview with Oprah Winfrey in March 2021, Harry claimed Charles cut him off financially and that the new monarch stopped taking his phone calls.

“There is a lot to work through there,” Harry said about his relationship with his father.

“I feel really let down. He’s been through something similar. He knows what pain feels like. And Archie is his grandson of it. I will always love him, but there is a lot of hurt that has happened.”

Elsewhere during the funeral service, shots of Harry’s wife Meghan with her face

A handful of other unscripted moments caught royal watchers’ attention too, with viewers spotting a spider hitching a ride on the Queen’s coffin, and one prominently placed mourner suffering a “mortifying” accident as the world watched when he dropped his funeral program directly beside the Queen’s coffin.

And outside, Nine presenters Tracy Grimshaw and Peter Overton suffered a gaffe of

their own, when they failed and failed to correctly identify new UK Prime

Minister Liz Truss as she arrived for the funeral.