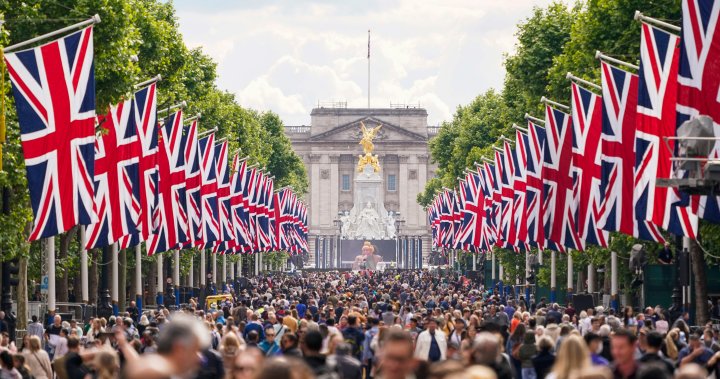 Millions will be celebrating the Queen’s Platinum Jubilee in their homes and communities over the coming four days, but a couple of Canadians along with some eager Americans and Brits will have front-row seats for a once-in-a-lifetime closeup.

With less than 24 hours to go until the festivities unfold, central London and The Mall in particular are packed with people decked out in Union Jack hats and wrapped up in the flag. Bunting flutters from the pubs and souvenir shops lining the surrounding streets, and you can’t seem to pass a crowd of people on the sidewalks without hearing someone mention the jubilee.

For now, most of the people along The Mall are pedestrians milling around the famous street as countless flags flutter along the sides. But hours within the road will be full of colorful uniforms and horses all Trooping the Colour, as thousands of spectators watch from the sides of the street.

So getting a seat at the front of the pack is no easy feat — just ask Angie and Patrick Hart, Canadians from Brantford, Ont.

“We started camping out here yesterday morning and we’ll be here until after the Trooping the Colour,” said Angie Hart, speaking in front of the Canadian flag strung up outside the tent she and her husband are staying in with their children in order to get a firsthand glimpse at the pomp and circumstance.

Patrick said while the early setup was part of the plan, doing it in a tent was not — until the notoriously fickle British skies opened up ahead of the big parade.

“Yesterday it rained so bad and hailed. And we weren’t originally going to be trying but we decided to call an audible and go and get some supplies,” he explained, referencing the football phrase for changing up plans while in the middle of the game.

The Queen’s Platinum Jubilee: Plenty of pomp and pageantry planned for historic event

When it comes to camping out, the Harts are no strangers to what it takes for a closeup view of the Royals. Angie says she once waited at the Royal York hotel in Toronto during the official visit of Prince Charles and the late Princess Diana in 1991.

She also camped out for the weddings of Prince William and Kate Middleton in 2011, and when Prince Harry and Meghan Markle tied the knot in 2018.

“The Platinum Jubilee’s really special. We wanted an opportunity to see the Queen,” Angie said.

“I’ve always had a love for England, all things British, the royals. My grandma came from England and it got in my blood, and this was on my bucket list,” she added.

“Pat’s here, he’s supportive of it, so we’re having a good time.”

For Bernadette Christie of Grande Prairie, Alta., the Platinum Jubilee is the latest in a long line of royal encounters over the years. She’s no stranger to camping out for the view, either.

“It’s the only way to get front row seats,” she said from her spot along the edge of The Mall.

Christie has seen the royals a total of 10 times, including shaking hands with Prince Charles and Princess Diana twice, camping out for the 2011 royal wedding, and taking a 20-hour motorcycle ride up to the Northwest Territories to meet Prince William and Kate during their post-wedding tour of Canada.

The latter, she said, was a particular topic of interest for the future king.

For Christie, the big moment will be one for some 20 years in the making, as the Queen’s Gold State Coach comes out onto the street for the first time in two decades.

“It’s so exciting to see the Queen, and I want to see that golden coach that hasn’t been out for 20 years. It’s going to be something spectacular,” she said.

Dawna Werner of Connecticut also camped out along The Mall next to a hand-drawn sign reading, “America [hearts] a Rainha.”

She said she admires how long the Queen has been doing the job and the way she has carried herself to maintain public respect over the past 70 years, far longer than any of the terms of the 13 American presidents who have come and gone during her reign .

“We don’t have anything like this in the United States,” Werner said.

Majority of Canadians want to ditch the British monarchy. How feasible is it?

The celebrations come as the British monarchy faces renewed questions about its future, and the Commonwealth countries weigh their continued ties to the Crown.

In November, Barbados officially became a republic and ditched Queen Elizabeth II as its head of state.

Even in Canada, where support for the monarchy has historically been strong — and untangling ties to the Crown would be a constitutional debacle without compare — public sentiment may be shifting.

An Angus Reid Institute survey earlier this year found more than half of Canadians are against continuing as a constitutional monarchy, though nearly two-thirds still hold a favorable view of the Queen herself.

Back in 2016, only 38 percent said Canada should cut ties to the monarchy.

There are also stark differences in support among Canadians for Prince Charles, the Queen’s son and direct heir, compared to the number who hold positive views of his son, Prince William, who is currently second in line for the throne after his father.

Among Brits, there are similar sentiments.

6:00The future of the Royal Family in the Caribbean

“I don’t think Charles should go on the throne next. I think William should,” said Sandra Brabbs from her camping spot along The Mall. “Charles is getting – no disrespect – Charles is getting too old now, I think he should hand it straight over to William.”

At her side was a fellow royal lover Minerva Halil. And though the two banter like lifelong friends, they say they have actually only just met while setting up their spots side-by-side.

Halil says she has camped out five times before for royal events, including past jubilees and weddings. But the Platinum Jubilee, she said, is without compare.

“I feel proud to be British, to be in the United Kingdom,” she said, her voice cracking. “It just means the world to me… We’re talking about 70 years. It’s never been seen, it’s never happened.”

“And I don’t think it’ll ever happen again,” Brabbs added in.

Halil said if Prince Charles were to pass the throne to Prince William, it would mean more jubilees because of the longer reign a younger king would likely have.

For her and for Brabbs, the benefits — even if it means standing in the rain — are clear.

“This jubilee pulls us together, it makes so much friendship. I’ve not known her for five minutes, we’ve become good friends,” Brabbs said.

“This is what it’s all about. Love, friendship. What else can you say? This is it.”