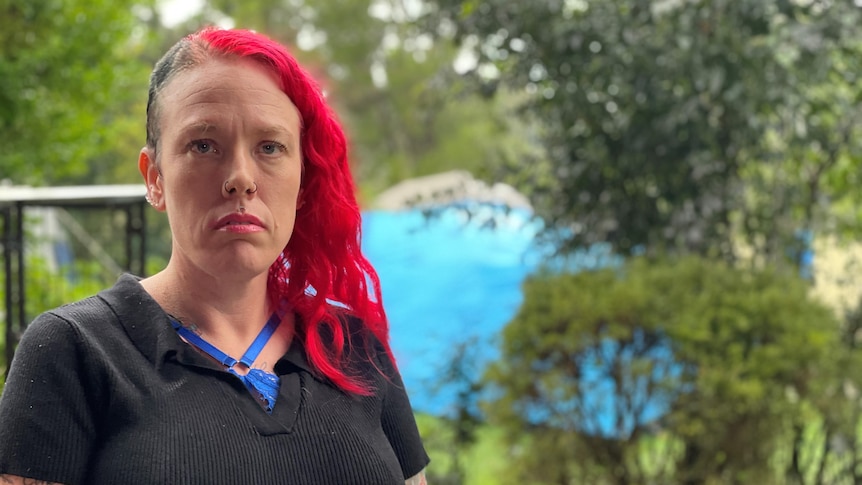 Victims of the devastating February floods in south-east Queensland say the latest severe rain event has triggered trauma, and could reverse the little progress made in clean-up efforts.

Tegan Cornacchia lost everything she owned when her two-storey Ipswich home had water up to the roof gutters in the 2011 floods.

She was forced to evacuate in this year’s floods and returned to find her bottom floor had gone completely under water.

She said the latest heavy rainfall has her on edge and unable to sleep, fearful she’ll have to flee her home again.

“I am an absolute emotional and mental mess because of all this, I’m on medications for stress disorders and PTSD,” Ms Cornacchia said.

“My house doesn’t feel like a home anymore because I’m still living out of boxes.

“I don’t have any of my possessions still because they’re in storage, in fear that they will get ruined by the floods.

“My kids have been traumatised. They’re continuously living through trauma every day being in this flooded area.”

Ms Cornacchia has been forced to live on the second floor of her North Booval home with her four children because the bottom floor remains uninhabitable due to damage to walls, debris, and mould.

A woman and her two adult children with disabilities left homeless due to the floods are living in tents in her backyard.

“If it doesn’t stop raining anytime soon, I’m probably going to lose my property and I’m really just not prepared to do that because that would render me homeless,” Ms Cornacchia said.

“I’m really on edge about it. So I’m hoping it really eases up in the next few days.

“I’ve got nowhere else to go.”

Valerie Perriman’s Logan home was flooded in February and she said what little clean up she has been able to do could be destroyed by the latest weather.

“The water came over a meter of the bottom level of our property where our disabled daughter was living,” Ms Perriman said.

“We had to rip everything out including walls and the floor, it’s a demolition zone there now and because of the mold I’m having to use a hospital-grade air purifier upstairs just so that we aren’t getting sick.”

She said the heavy rainfall is anxiety-inducing and causing mental health problems.

“It’s just something that I don’t know you can really prepare how you’re going to recover from it.”

Queenslanders whose homes were damaged by Brisbane’s flood disaster can now register for grants to raise, repair, retrofit or have their property voluntarily bought back from today.

Those impacted by flooding from ex-tropical Cyclone Seth and flooding that occurred in central, southern and western Queensland in late 2021 are also eligible.

“The recent flood emergency saw parts of the south-east suffer disaster damage not seen since 2011,” he said.

“We know from initial assessments following the south-east Queensland floods that there were nearly 7,000 homes with some degree of damage and more than 3,600 left uninhabitable.

“This is the largest household resilience program of its kind to ever be delivered in Australia.

“This is a nation-leading program which has the potential to change people’s lives by improving the resilience to future flooding or removing them from harm’s way altogether.”

Fraser Coast Regional Council Mayor George Seymour said the funding had come at the right time for Maryborough residents, who have hardened two floods this year.

“I’ve already spoken to a number of people who live in Maryborough who have not been able to move back into their houses who I know will be interested in this,” Mr Seymour said.

“There are issues with getting builders anyway. So even if people directly after the floods had the money it still wouldn’t be fixed, just because there is a massive shortage of supplies and builders.”

For Ms Cornacchia, the flood package has come too late.

“The state government has been really poor in their approach to helping victims,” ​​she said.

“We’ve been sitting here feeling totally ignored and there are lots more people out there that are in the same situation as I am.

“It is literally just a mess at the moment, so I would really urge anyone to reach out to their local member and try and get things fixed and rectified like they should have been from the start.”

Ms Perriman said she has been waiting to hear back if her home is eligible for a buyback for months.

“I’m really worried I will slip through the cracks and either be unfairly compensated or just miss out altogether when it comes to the buyback,” she said.

“The fact I am a single mother on a disability and carer allowance and have no superannuation, education, qualifications or experiences leaves me thinking I will never be able to own a home ever again as I spent every last cent I had buying this place as I was homeless at the time and had never been without my girls before.

“I didn’t rush it and made sure I had all the conveyancing, building and pest and land searches and not once was I warned or made aware of the level of risk of flooding to the house.”

Brisbane Lord Mayor Adrian Schrinner said the clean up costs from the February flood event will far surpass the cost of the 2011 floods.

“The assessment that has been undertaken has found the cost of this disaster will far exceed the 2011 flood costs,” Mr Schrinner said.

“While the 2011 flood caused enormous damage, the 2022 event involved a combination of river, creek and overland flow flooding across 177 suburbs and this has caused far more damage to council assets and facilities.”