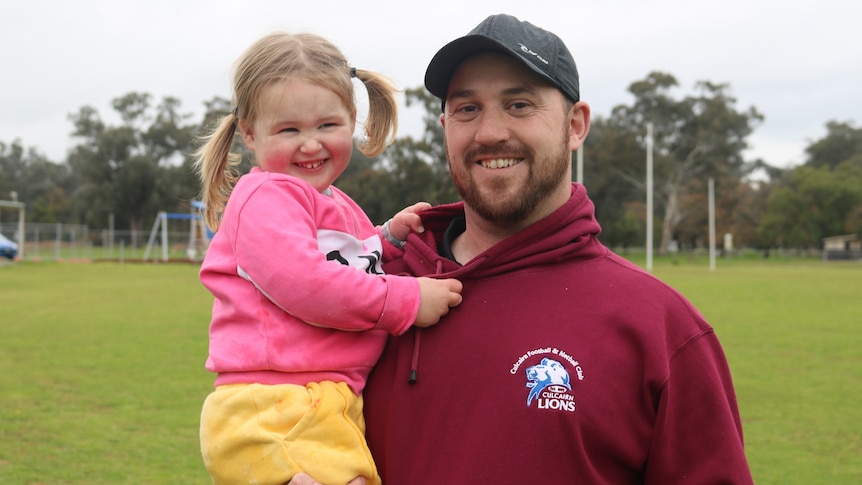 Stopping alcohol-fuelled celebrations in the changing rooms is one way a sporting club in southern NSW is changing a culture of drinking in community sport.

“Sporting clubs aren’t somewhere where you have to feel pressured to drink alcohol to fit in,” he said.

Mr Kent said traditions like encouraging a player to scull a beer when they won the best on ground had been eliminated.

“In the bush country league football, we’ve got juniors [players] coming up and playing in the senior netball and senior football teams,” Mr Kent said.

“We wanted to be conscious about what we’re promoting after games in terms of alcohol consumption and encouraging people to get changed, get out of the rooms and then go have a beer in the main club area.”

“Creating a safe environment that’s still enjoyable, but we really want to promote ourselves as a family club,” Mr Kent said.

Sport and alcohol are often hand in hand

“Often, in rural areas where there are limited opportunities to socialise, the sports club becomes the meeting place and because there’s a lot of drinking, it’s often the introduction for alcohol for a number of people.”

This exposure was problematic, he said.

“Young children who are exposed to more alcohol or are allowed to drink alcohol while they’re underage are more likely to drink at harmful levels when they’re over 18.”

Dr Rowland has studied the impacts of efforts to reduce alcohol consumption in community sporting clubs in the Hunter, New England and Sydney regions of NSW.

He said many people were concerned that managing alcohol would impact the financial sustainability of clubs that generated income from alcohol sales.

“The club becomes a more family friendly social environment because the flip-side of selling too much alcohol … is it actually drives people away.”

The Culcairn Lions didn’t make the finals in the Hume Football league this year but Mr Kent said his club was still celebrating after lockdown impacted the past two seasons.

He is hoping those celebrations will be responsible.

“It’s just really great to have the finals back after a couple of tough years,” he said.

“You get that vibe that people are just really happy that we’ve got through the season.

“Finals can be big days in the sun and alcohol consumption is obviously a big part of that but just making sure we’re safe and respectful.”