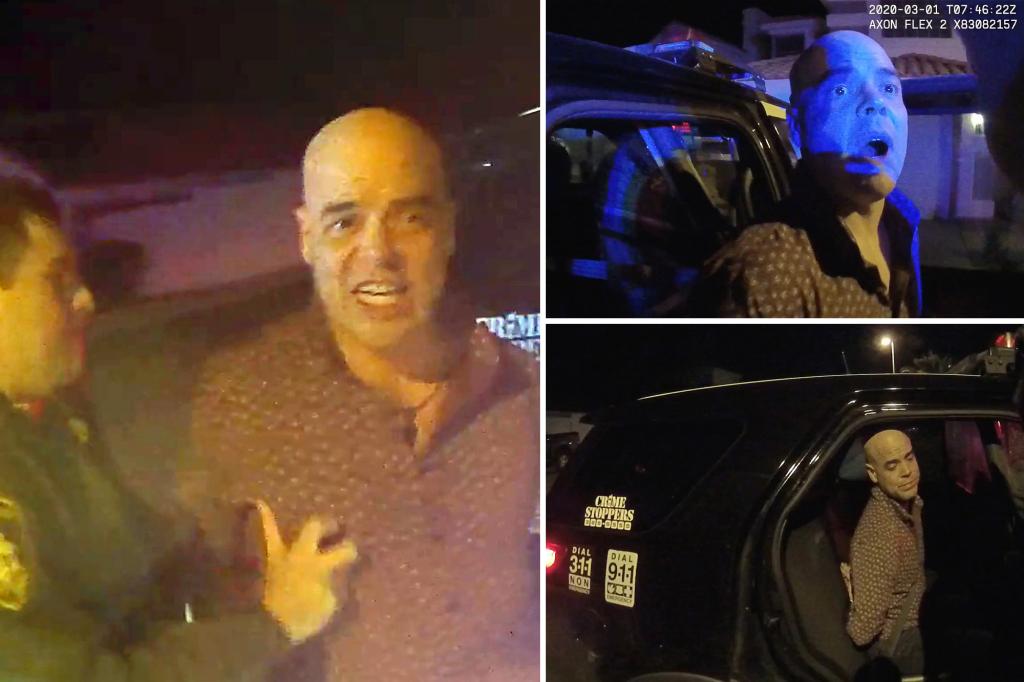 The Las Vegas official charged with killing investigative reporter Jeff German whined to police that he “would like to be reelected” during a 2020 arrest for domestic violence involving his wife, according to newly released body camera footage of the meltdown.

In the video obtained by The Post, Robert Telles can be heard slurring his words while handcuffed in the back of a police car outside of his home after he allegedly grabbed his wife around her neck while they were driving back from the Bellagio Casino Hotel in March 2020, according to a police report.

“I really thought that half an hour ago that she loved me,” Telles blurted to an officer in one of the videos released by cops. “I’m so not someone embarrassing. I’m the official public. I’m not trying to be a–hole or a jerk,” he said.

“I would like to be reelected by the way. If my wife, who I’ve been married for nearly 10 years, is going to be acting like I’m going to f–ing kill her… Oh, my God! I’ve never ever friggin’ touched her!”

The domestic violence incident occurred two years before Telles, the Clark County Public Administrator, was charged with the slaying of German, a veteran Las Vegas Review-Journal reporter who had written a series of scathing reports that exposed mismanagement by the disgraced official.

In a Friday jail house interview with the Las Vegas Review-Journal, Telles said his drinking problem led to his blowout fight with his wife, but he refused to comment on the murder charges he is facing.

During the March 2020 incident, once the couple got back to their residence, the argument continued with Telles allegedly shouting, “Kill me” at his wife and their two children. At one point, his wife dela barricaded herself and the kids in a room but Telles broke in and refused to let her go while gripping her in a tight “bear hug.”

In a 911 call obtained by the Las Vegas Review-Journal, Telles’ wife said her husband was “going crazy.”

A crying child can be heard in the background while the wife tells the dispatcher, “He just won’t leave us alone. He had too much to drink tonight, and it’s just … me and my kids are scared.”

At the time of the domestic violence incident, Telles, a Democrat, had already been Clark County’s public administrator for a year.

According to the 2020 police report, the two children had to pry their intoxicated father off of their frightened mother. Body camera footage showed Telles repeatedly yelling at cops and asking, “Who did I hit?! … You guys just want to take me down because I’m a public official.”

When one of the replied officers that his wife probably called authorities because he was drunk, Telles blurted, “Honestly, I’ve been way f**king drunker than this,” and continued to deny that he hit his wife.

The domestic violence charges were eventually dismissed on Sept. 30, 2020 after a negotiation and Telles received a suspended 90-day sentence on the resisting arrest charge, according to the Las Vegas Review-Journal. He was required to pay fines and take classes that focused on how to manage stress and relationships.

According to court records, Telles completed the class and the case was dismissed on March 30, 2021.

In Friday’s jail house interview with the Review-Journal, Telles admitted he had a drinking problem and “blacked out” the night he was out with his wife at the Bellagio hotel in 2020.

“Like any other person I’ve certainly made mistakes, and I’ve just really tried to do my best to live my life doing good for others, and I’m hoping that, again, with everything that’s rolling around in the media these days, that people really see that,” Telles said to the paper.

Telles said he is still married to his wife.

“It was certainly not me and was a wake up call,” Telles said of the 2020 incident.

He remains at the Clark County Detention Center and is scheduled to appear in court on Sept. 20. He is facing one felony county of murder with use of a deadly weapon on a victim 60 years or older and that he acted with “malice aforethought” and was “lying in wait” when he allegedly stabbed German at his home dele on Sept . 3.

German, 69, an investigative reporter who covered public corruption, wrote a series of stories uncovering Telles’ misdeeds, including exposing an affair with a subordinate employee in his office, estate coordinator Roberta Lee-Kennett, 45, who is also married.

County employees who worked under Telles said he was favoring his alleged mistress on assignments she was not qualified to handle.

As Clark County’s Public Administrator, Telles oversaw the department that secures property of deceased residents until a family member or executor is assigned by the court. The office also handles the estate of a deceased when families are not able to.

Capt. Dori Koren, head of the Las Vegas Metropolitan Police Department Homicide and Sex Crimes Bureau, said Telles had been upset and blamed the intrepid reporter and his articles for the “unraveling” of his professional and personal life.

At the press conference, Koren said DNA evidence found under German’s fingernails and evidence found in Telles’ home, including sneakers and a hat that had been cut in pieces, led to the arrest.

Telles was arrested on Sept. 7 after a two-hour standoff with police after he reportedly made suicidal statements. On Tuesday, he appeared briefly in court and grinned at the judge, his arms and wrists bandaged and in handcuffs.

During his Friday jailhouse interview, Telles refused to comment if he tried to harm himself but pushed back when questioned about his alleged mismanagement of the Clark County Public Administrator’s Office.

He said some of the employees he oversaw were unhappy with the changes he had made, particularly with cutting overtime hours and wages.

When asked if he plans to stay in his position as a public officer, Telles said he did not have an answer at the moment.

“I did so much to improve that office all while frankly dealing with hostility from some folks in the office,” he said. “And it’s unfortunate that the narrative somehow grew legs and ran. We actually did a lit of great work at that office.”