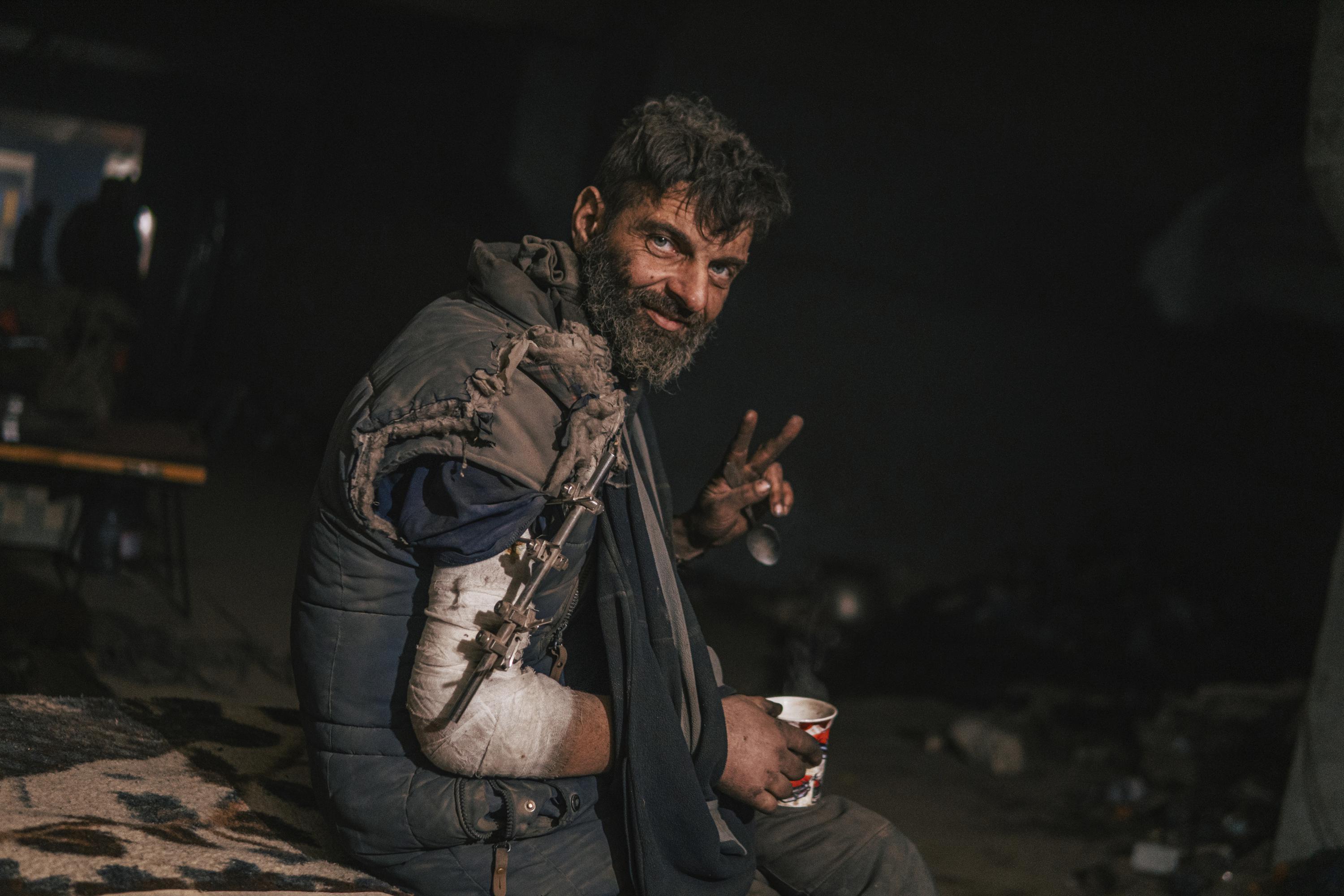 KYIV, Ukraine (AP) — Russian forces unleashed airstrikes on the last pocket of Ukrainian resistance in the besieged city of Mariupol and pressed their advance on towns across the country’s east, Ukraine’s military said Thursday.

As the war, which has ground to a stalemate, wrought more death and upheaval, its globe-shaking repercussions spread, with Finland announcing plans to end decades of neutrality and seek NATO membership.

Finland’s president and prime minister said Thursday that the Nordic country should apply “without delay” for membership in the Western alliance, founded in part to counter the Soviet Union. The announcement means Finland is virtually certain to seek to join the military alliance, though a few steps remain before the application process can begin. Neighboring Sweden is expected to decide on joining NATO within days.

NATO’s support of Ukraine — particularly by supplying weapons — has been critical to Kyiv’s surprising success in stymieing Russia’s invasion, which began on Feb. 24. Many observers thought Moscow’s larger and better-armed military would be hard to stop, but the Ukrainians have bogged Russian troops down and thwarted their goal of overrunning the capital.

Still, the war has unleashed staggering destruction, killed thousands and forced millions from their homes, while shattering Europe’s sense of post-Cold War stability. It has prompted NATO to send troops and weapons to fortify the alliance’s eastern frontier and led Sweden and Finland to reconsider longstanding opposition to joining the trans-Atlantic alliance, whose members are committed to mutual defense.

In Mariupol, which has seen some of the worst destruction of the warUkraine offered to release Russian prisoners of war in exchange for the safe evacuation of badly wounded fighters trapped inside the Azovstal steel mill, the last redoubt of Ukrainian forces in the ruined city.

Ukrainian Deputy Prime Minister Iryna Vereshchuk said that negotiations were underway to release the wounded. She said there were different options, but “none of them is ideal.”

Russia’s forces have taken control of the rest of the city, which they besieged for weeks, the residents ran short of food, water and medicine. Many thousands have fled, saying almost nothing remains of the port city, but an adviser to the Mariupol mayor said Russian forces have now blocked all evacuation routes.

Petro Andriushchenko said there are few apartment buildings fit to live in, and some remaining residents are cooperating with occupying Russian forces in exchange for food, though he did say Thursday the troops have summarized water supplies to two neighborhoods as a test.

“The occupiers turned Mariupol into a medieval ghetto,” said Mayor Vadym Boychenko in comments published by City Hall, as he called for a complete evacuation of the city. Officials said in recent weeks that about 100,000 residents could still be trapped in Mariupol, which had a prewar population of over 400,000.

Russian and Ukrainian authorities have periodically agreed to cease-fires to evacuate residents, and repeatedly blamed each other when those efforts failed. Andriushchenko’s allegations could not be independently confirmed.

In the wake of their failure to take Kyiv, Russian forces pulled back and regrouped — and switched their focus to Ukraine’s Donbas, an eastern industrial region where Moscow-backed separatists had fought Ukrainian troops for years. While Russia’s advance there has also been slow, the general staff of Ukraine’s armed forces noted Thursday that Moscow has achieved “partial success.”

It said Ukrainian forces repulsed nine attacks by Russian forces and destroyed several drone and military vehicles. The information could not be independently verified.

Evacuees from towns in the embattled east wiped away tears as they carried their children and belongings onto buses and vans to flee.

“It is terrible there now. We were leaving under missiles,” said Tatiana Kravstova, who left the town of Siversk with her 8-year-old son Artiom on a bus headed to the central city of Dnipro. “I don’t know where they were aiming at, but they were pointing at civilians.”

Ukraine’s military also said Russian forces had fired artillery at Ukrainian units north of the city of Kharkiv — a northeastern city key to the offensive in the Donbas; fired artillery and grenade launchers at Ukrainian troops in the direction of Zaporizhzhia, which has been a refuge for civilians fleeing Mariupol; and attacked in the Chernihiv and Sumy regions to the north.

Overnight airstrikes in the Chernihiv region killed three people and wounded 12, according to local media citing emergency services. The regional governor said the strikes on the town of Novhorod-Siverskyi damaged a boarding school, dormitory and administrative building.

President Vladimir Putin reaffirmed Russia’s determination to ensure territory in the Donbas held by Moscow-backed separatists never returns to Ukraine in a congratulatory message Thursday to the head of the self-proclaimed Luhansk People’s Republic.

On the eve of its invasion, Russia recognized the separatists’ claim to independence in Luhansk as well as in the other Donbas region of Donetsk. Moscow sought to justify its offensive by claiming, without evidence, that Ukraine was planning to attack areas held by separatists and that it intervened to protect people in those regions.

“I am sure that through our joint efforts we will defend the independence, sovereignty and territorial integrity” of the Luhansk republic, Putin said in a statement released by the Kremlin.

Elsewhere, Kyiv prepared for its first war crimes trial of a captured Russian soldier. Ukraine’s top prosecutor said her office her charged Russian Sgt. Vadin Shyshimarin, 21, in the killing of an unarmed 62-year-old civilian who was gunned down while riding a bicycle in February, four days into the war.

Prosecutor General Iryna Venediktova’s office has said it has been investigating more than 10,700 allegations of war crimes committed by Russian forces and has identified over 600 suspects.

Volodymyr Yavorskyy of the Center for Civil Liberties said the following Ukrainian human rights group will be closely following Shyshimarin’s trial to see if it is fair — noting the difficulty of overserving the norms during wartime.

On the economic front, Ukraine shut down a pipeline that carries Russian gas across Ukraine to homes and industries in Western Europe, disrupting the westward flow of one of Moscow’s most profitable exports.

The immediate effect is likely to be limited, in part because Russia can divert gas to another pipeline and because Europe depends on a variety of suppliers. Still, the cutoff underscored the broader risk to gas supplies from the war.

In the southern Kherson region, site of the first major city to fall in the war, a Moscow-appointed leader said Ukrainian officials there want Putin to annex the area. Kirill Stremousov, deputy head of the regional administration appointed by Moscow, told Russia’s RIA Novosti news agency: “The city of Kherson is Russia.”

That was something at least one resident contested. “All people in Kherson are waiting for our troops to come as soon as possible,” said a teacher who gave only her first name to her, Olga, out of fear of retaliation. “Nobody wants to live in Russia or join Russia.”

A Black Sea port of roughly 300,000, Kherson is seen as a gateway to wider Russian control over southern Ukraine. The development raised the possibility that the Kremlin would seek to break off another piece of Ukraine as it tries to salvage an invasion gone awry.

Yesica Fisch in Bakhmut, David Keyton in Kyiv, Yuras Karmanau in Lviv, Mstyslav Chernov in Kharkiv, and AP staffers around the world contributed.

Follow AP’s coverage of the war in Ukraine: https://apnews.com/hub/russia-ukraine