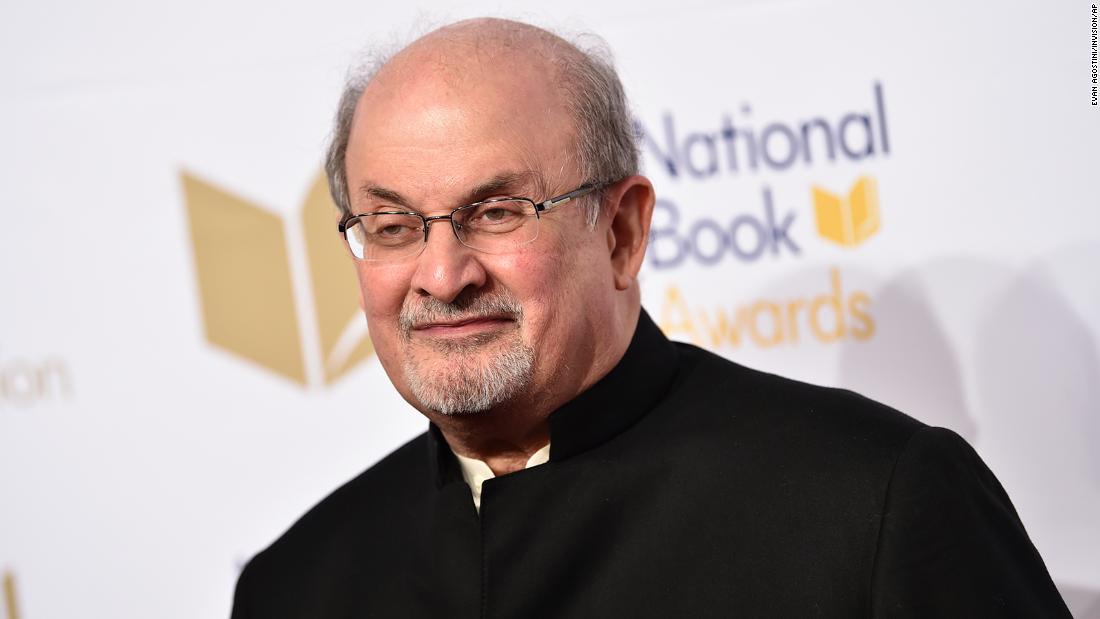 The family of the 75-year-old author — who for decades lived under threat because of his writings — said he was in critical condition Sunday after the on-stage attack, which ended with the assailant being held down by staff and guests and Rushdie being airlifted to a hospital.

“Though his life changing injuries are severe, his usual feisty & defiant sense of humor remains intact,” his son Zafar Rushdie said in a Sunday statement.

The suspect, identified as 24-year-old Hadi Matar, of Fairview, New Jersey, was arrested by a state trooper after the attack and taken into custody.

What we know about the “targeted, preplanned” attack

Rushdie was being introduced to give a lecture at the Chautauqua Institution Friday when a man lunged onto the stage and stabbed the author in several places in front of a stunned audience.

Staff members and guests then hit onto the stage and held down the assailant before a state trooper assigned to the event took him into custody, according to the New York State Police.

Also injured in the attack was Ralph Henry Reese, another speaker at the event who suffered a minor head injury.

“It was very difficult to understand. It looked like a sort of bad prank, and it didn’t have any sense of reality,” Ralph Henry Reese told CNN’s “Reliable Sources.” “And then when there was blood behind him, it became real.”

A witness, Joyce Lussier, was sitting in the second row when she saw the attack unfold. She heard people screaming and crying, she told CNN, and saw people from the audience rushing up to the stage.

The suspect, Matar, had arrived in Chautauqua at least a day before the event and bought a pass to the event two days prior, authorities said.

The felony complaint against Matar indicated a knife was used in the stabbing.

It remains unclear how the suspect may have entered the event armed with a knife. A witness has, however, told CNN there were no security searches or metal detectors at the event. The witness is not being identified because they expressed concerns for their personal safety from him.

Institution President Michael Hill defended his organization’s security plans when asked during a news conference Friday whether there would be more precautions at future events.

“We assess for every event what we think the appropriate security level is, and this one was certainly one that we thought was important, which is why we had a State Trooper and Sheriff presence there,” Hill said.

“The team that was on the ground here and the EMTs, the firefighters and those who show up and literally kept the man alive as they were transporting him, did an extraordinary job,” the governor said.

The suspect pleads not guilty, described as a ‘quiet’ New Jersey man

Matar — who authorities said has no documented criminal history — pleaded not guilty to charges of second-degree attempted murder and second-degree assault with intent to cause physical injury with a deadly weapon, his public defender, Nathaniel Barone, told CNN Saturday .

The attorney said Matar has been “very cooperative” and communicating openly, but he did not discuss what was said during those conversations.

He faces up to 32 years if convicted of both charges, Schmidt said.

Killing was described as being a quiet person who mostly kept to himself.

The suspect had enrolled at the State of Fitness Boxing Club in North Bergen, New Jersey in April, the gym’s owner, Desmond Boyle, told CNN.

“You know that look, that ‘it’s the worst day of your life’ look? He came in every day like that,” Boyle told CNN on Saturday.

A member of the gym, Roberto Irizarry, told CNN Matar frequented the gym about three or four times a week and was “a very quiet kid.”

“It’s a brotherly environment, family environment — we try to involve everybody. He was to himself, pretty much,” Irizarry said.

The attack on the prominent author generated an outpouring of support from leaders worldwide.

US President Joe Biden said in a statement he was saddened by the attack.

“Salman Rushdie — with his insight into humanity, with his unmatched sense for story, with his refusal to be intimidated or silenced — stands for essential, universal ideals. Truth. Courage. Resilience. The ability to share ideas without fear. These are the building blocks of any free and open society,” Biden said.

UK Prime Minister Boris Johnson said in a tweet he was “appalled” by the attack on Rushdie, who is also a British citizen.

“Appalled that Sir Salman Rushdie has been stabbed while exercising a right we should never cease to defend. Right now my thoughts are with his loved ones. We are all hoping he is OK,” Johnson said Friday.

Rushdie’s former wife, TV host Padma Lakshmi, said in a tweet Sunday she was “relieved” Rushdie is “pulling through after Friday’s nightmare.”

“Worried and wordless, can finally exhale. Now hoping for swift healing,” she said.

Suzanne Nossel, CEO of PEN America, in a statement said

“PEN America is reeling from shock and horror at the word of a brutal, premeditated attack on our former President and stalwart ally, Salman Rushdie, who was reportedly stabbed multiple times while on stage speaking at the Chautauqua Institute in upstate New York,” Nossel said. “We can think of no comparable incident of a public attack on a literary writer on American soil.”

“Salman Rushdie has been targeted for his words for decades but has never flinched nor faltered,” Nossel added. “He has devoted tireless energy to assisting others who are vulnerable and menaced.”

Rushdie’s writings have won him several literary prizes, but also scrutiny. His fourth novel, “The Satanic Verses,” drew condemnation from some Muslims who found the book to be sacrilegious.

The late Iranian leader Ayatollah Ruhollah Khomeini, who described the book as an insult to Islam and Prophet Mohammed, issued a religious decree, or fatwa, calling for Rushdie’s death in 1989.

As a result, Rushdie began to decay under British protection.

While the motive behind Friday’s stabbing remains under investigation, New York’s governor condemned the attack.