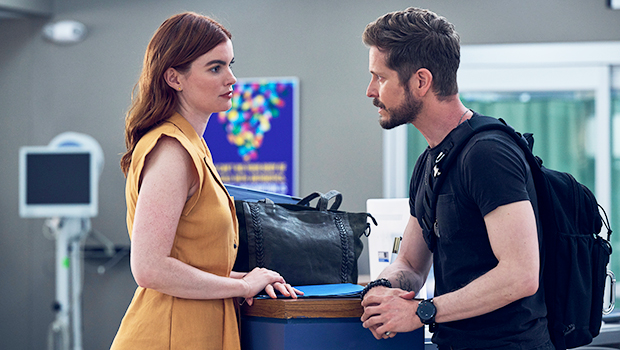 The Resident kicked off season 6 with several developments in and out of the hospital. AJ, Leela, Padma, and Devon got wrapped up in a medical crisis with Padma’s twins. Meanwhile, we finally learned that Conrad is dating Cade after last season’s cliffhanger.

HollywoodLife got EXCLUSIVE scoop from executive producer Amy Holden Jones about what this means for Billie’s feelings for Conrad now that he’s with Cade. She hinted that “feelings tend to come out at weddings,” and KitBell’s nuptials are coming up in the show’s milestone 100th episode. Read our Q&A below:

You had me going there in the premiere. I thought Conrad was with Billie, but it turns out he’s dating Cade. When it comes to Conrad and Cade are we going to get to see that relationship evolve and grow outside and inside the hospital this season?
Amy Holden Jones: We are going to see that, but it’s not the only story for either one of them. Conrad has a lot of story with Gigi and, of course, her patients. Cade has a very big story with her father. But yes, we are. At the beginning, the premiere doesn’t really tell you that much about what the nature of that relationship is. You’re going to start to see it big in the second episode, where you will figure out much more about who they are together and what they are. Like all relationships, you don’t know where it’s going to end. They have to learn to be together and what it means to be together. How that goes forward will be determined in the season. When people are together, it’s not a given that that’s the end. There are challenges, and there are questions. You just don’t know where it’s going to go. But they definitely have chemistry you’ll see that in episode 2.

We also learned that Billie didn’t come forward with her feelings for Conrad, at least to his face. We see that scene between Billie and AJ in the back half of the premiere. What does this mean for Billie? She’s only going to be able to hold in those feelings for so long.
Amy Holden Jones: That scene is very interesting to me. And, of course, I wrote it. It’s both about Billie and Conrad, and it’s about Raptor and Billie and their growing friendship. I think that his theory may well be right. She was Nic’s best friend, which is complicated and true. Conrad didn’t know this was an impediment to their going forward. So it’s not clear if he knew whether he would have made the same choice. Both women are actually viable choices as the casting of both of them turned into a bonanza for us. They’re both tremendous. So whether AJ is right or not about her future her is yet to be seen. But their relationship’s also with each other, Billie and Cade. It’s not only predicated on their feelings about Conrad. They also have an arc, which plays out more in the second half of the season of how they report to each other as people irrespective of anybody’s dating. It’s all complicated for sure.

When it comes to Conrad, we know there are feelings on both sides with Cade and Billie. Will we learn how Conrad views those relationships?
Amy Holden Jones: Oh yes. You’ll see his feelings about Billie are complicated. The big episode is our 100th episode — the wedding — and feelings tend to come out of weddings. There’s a lot to be learned, but answers are not going to be simple. It’s not like he’s going to learn everything before the end of the season or figure it all out. The journey that he and Cade go on also together, is unrelated to Billie but related to her father because Ian’s story is a very big arc and a big theme of the season of both his father-daughter relationship and what happens to someone who is the child of someone with an addiction. There’s the whole codependency question and the pain of loving someone who’s an addict. His arc of it impacts everything. It impacts the hospital also because doctors have two times the rate of addiction of the general population. Here you have people who have spent 8 to 10 to 12 years sometimes or more training to do this thing they do and often it’s a doctor who is incredibly valuable and good who falls into this trap. Do you just cut that asset off? Addiction is a disease, and yet you can’t have a dangerous doctor. So where does that go for the hospital, and where does it go for Cade? What must she learn about dealing with this is a big story of the season and how Conrad reacts to that and helps or doesn’t help with it is to be seen. He’s walked that journey before with Nic, whose sister and father both had issues. How will he handle it as an issue as well? It’s incredibly fertile territory, especially in the hands of Andrew McCarthy. I’ve seen it all the way through 5 episodes. He’s phenomenal.

Just when Cade and Ian take a few steps forward, they wind up taking some steps back. She saw him popping pills at work. Will we see her confront him about that at some point?
Amy Holden Jones: She will. You’ll see it soon. But although you saw him take pills, they could have been vitamins. She is burdened with what everybody is. Most people in this world have had a good friend or a sibling or a family member of some kind — child, parent, whatever — who’s had addiction issues. She it’s so mobile. It’s hard. It’s hard to find anyone who hasn’t known someone or been involved with someone or had a family member who’s had these problems. That journey is such a rough one where once someone has slipped like that and had the problem, then the person who loves them is also thinking, are they being overprotective? Are they being smothering and wondering when there’s nothing there? Or is the addict trying to convince them of that? It’s all very complicated. It’s quite a journey for Cade and Kaley [Ronayne] takes it on in ways that are truly astonishing and wonderful.

Padma had a close call in this episode and had a very risky surgery to save the twins. Given the complications that have already arisen, how is this going to bond Raptor and Padma going forward?
Amy Holden Jones: The bigger issue really is actually a story of postpartum issues. It’s a Padma story. Her medical journey is not over. The shock and the stress of what she goes through will factor in throughout the season and the upcoming episodes. Here’s a happy-go-lucky character who suddenly has to face the kind of problems a fully adult mom faces. In addition, after the premiere, she’s learned to feel real fear and know that things can go wrong. We wanted to do a post-partum story where a character had challenges, including depression. It’s all the more heart-rending when that happens to a free spirit like Padma, and the effect this has on Leela and Raptor makes for a significant story that we deal with in the season. So it’s in a way less of a romance with Padma and Raptor than it is coping with this medical crisis.

With Leela and Devon, they’ve obviously taken a second chance on their relationship. What does their relationship look like in season 6?
Amy Holden Jones: As a couple, they’re uncomplicatedly happy and recommitted to each other. I think they’re moving towards a point where we’ll see them married as well, but they each have challenges in their lives. Leela is very much involved in helping Padma. If you have an identical twin sister who has this kind of difficult journey, she’s very tied up with that. But she’s also on the journey of transitioning to being a attending physician, not a resident, which will happen during the season. How she gets there and how shes her own difficulties will be part of her story as well. Devon’s somewhat related to all that in supporting her, but he also has very serious medical stories because he runs the clinical trials, and those factor in a number of ways throughout the season. They ultimately factor in with Bell and his MS, which is a very big story for Devon.

I know you touched a little bit on it earlier, but what can we expect from the 100th episode?
Amy Holden Jones: It’s a bang-up episode and, of course, features the wedding of Kit and Bell that we’ve all been waiting for, which has to be different from the other weddings we’ve seen. This is not the first wedding for both of them and yet is enormously romantic. It also involves a big medical story for Bell. It has a lot of stuff going on leading up to the wedding.