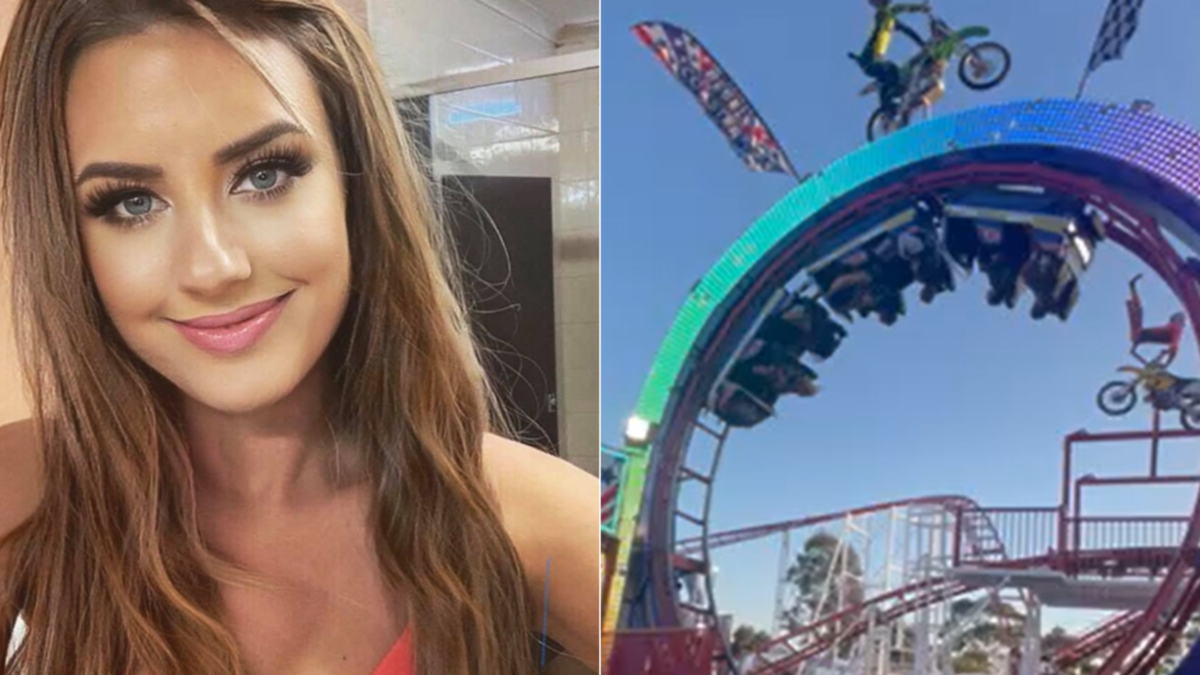 The eyewitness who unwittingly captured the moment a woman was flung into the air by a rollercoaster says he and his family are traumatized.

Jordan, whose sur was withheld, told 7NEWS.com.au that only a small number of people witnessed what really happened at the Melbourne Royal Show on Sunday night.

He was filming the Rebel Coaster ride while his sister Chloe and his partner Alex were in the front carriage, coming around a loop.

When they did, however, the ride struck 26-year-old Shylah Rodden, carrying her several meters in the air before she fell.

Jordan witnessed the moments leading up to the collision and says he “hasn’t slept since”.

“Both my sister and partner got called up to go on the ride previously but there was only one seat and they waited for the next one,” he said.

“My other sister was watching with me, we waited probably 15 minutes before we saw them because of the line.

“While we were waiting, we saw something drop from one of the rides and didn’t know what it was. Probably 10 minutes later, the ride my partner and sister were on went around.

“We saw a lady in an area where she shouldn’t be. A worker told her to get away but we couldn’t hear the whole conversation, she just told her not to be there. That person started to walk away and I didn’t think much of it.”

He then turned his attention back to the ride his sister and partner were on and began to record.

Then, he says, tragedy struck.

“It all happened so quickly but so slowly. All of a sudden, I saw someone getting taken up but at the same time I’m thinking ‘f***, my sister, my partner.”

The footage that accidentally captured the accident shows a woman standing by the tracks of the ride.

She appears to be looking down and doesn’t see the carriage – and its occupants – screaming towards her.

“She’d put her foot in between the post and started to bend down,” Jordan said.

“What my sister and partner have told me, it looked like someone had thrown themselves in front of it.

“But you can see she’d bent down to pick something up. I do n’t know if it was a phone or what, but she was so fixated on picking it up that she did n’t even see the ride at all.”

When she was hit, he said, she was silent.

“The screams that I heard came from onlookers, I think. It happened so fast.”

Jordan said he’d agreed to speak out to draw attention to the unseen aspect of the disaster – the first responders.

Within minutes of the accident, the scene was cordoned off and the police and Show staff were speaking to people.

Those still on the ride, including Chloe and Alex, were stuck up there for just shy of an hour.

But workers manually moved them from the steep incline they were on to a more level area of ​​the track in a bid to make them more comfortable.

“They were up there for about 45 minutes – but I can see how it might have felt like hours,” Jordan said.

Police were on the scene first, he said, offering counseling and information.

“They offered counseling, numbers to call and all that,” Jordan said.

“But they just let us know what was happening. They were very nice, took all our statements.

“I was trying to sign my name at the bottom of my statement and my hand was shaking. I’ve never experienced anything like that and I hope it never happens again.”

The footage he captured, which he describes as “lucky or unlucky”, was passed on to the police as they investigate how the accident happened.

7NEWS.com.au has chosen not to publish the full video.

Shylah remains in a critical condition days after the incident.

On Tuesday, the organizers of the Melbourne Royal Show issued a statement confirming that WorkSafe had finalized its inspection of the ride and gave it the all-clear to resume running.

“The safety and well-being of our visitors to the Show continues to be our number one priority,” the statement said.

“Strict safety protocols are upheld in line with Victorian WorkSafe regulations. All rides on site have documentation stringent compliance inspections and have passed all the required safety.”

But Rodden’s family said they were “saddened and appalled” that the ride had reopened so soon after the incident.

Earlier, Melbourne Royal Show CEO Brad Jenkins described it as a “tragic accident” and said his thoughts were with the young woman’s family and friends.

“It is a tragic accident and from our understanding, there was a mobile phone at the base of the Rebel Coaster that she dropped on the ride and she went back to recover the mobile phone,” he said.

“Regrettably, she was tragically struck by the cart coming down.

“It is an extreme rollercoaster which is a lot of fun generally, but this was a tragic accident that shouldn’t have happened.”

He added that the operator of the ride was experienced and that the machine itself had not malfunctioned.

“This is a tragic accident, not a malfunction of a ride, so I can assure people that the rides are entirely safe,” he said.