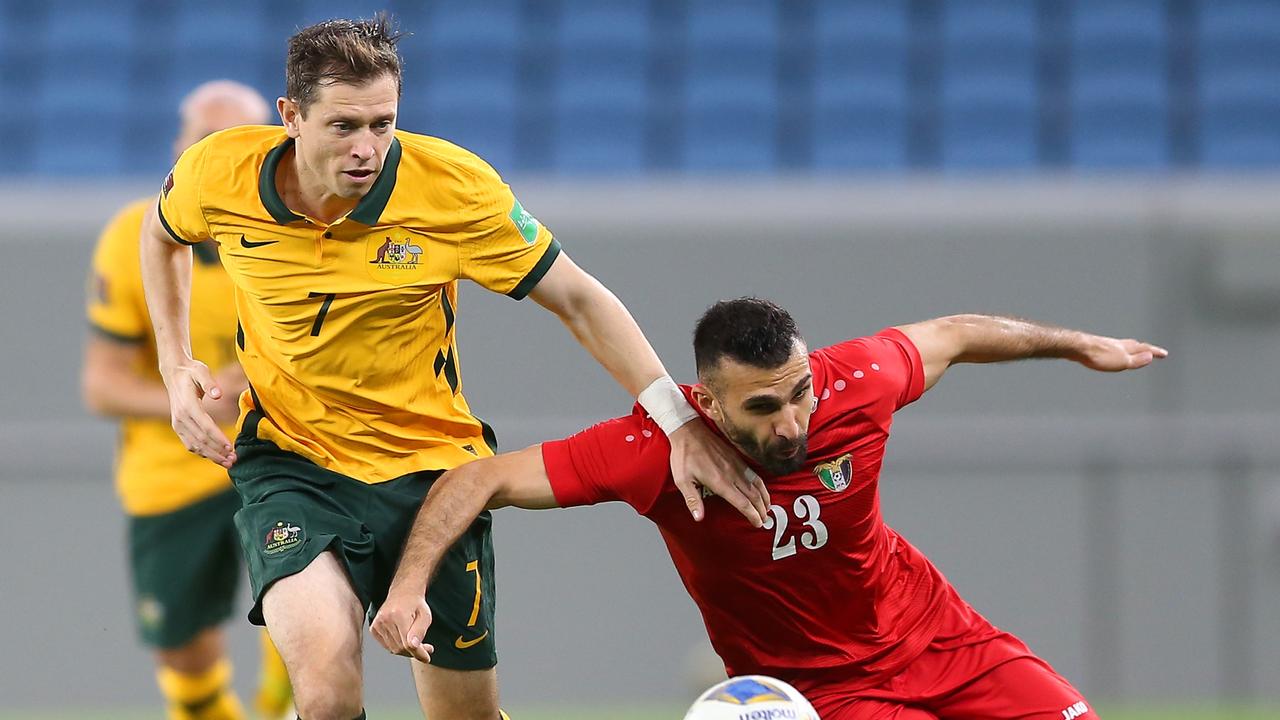 The Socceroos have beaten Jordan 2-1 but they will need to improve if they are to defeat the United Arab Emirates in next week’s sudden-death World Cup playoff.

The Socceroos have warmed up for next week’s do-or-die World Cup playoff against the United Arab Emirates with 2-1 win over Jordan in Qatar.

Slow starters, an experimental Socceroos line-up was forced to fight back from a goal down after Jordan went ahead via a blistering 18th-minute strike from attacker Mousa Al-Tamari.

A lack of creativity meant the Socceroos needed goals from set pieces to secure victory in Thursday morning’s friendly.

Australia’s improved second-half performance was rewarded with a winner from winger Awer Mabil in the 68th minute after Jordan failed to clear a corner.

But while the win was a confidence-booster after a disappointing end to their group campaign, the Socceroos will need to improve in all areas if they are to beat UAE in next Wednesday’s sudden-death affair to progress to the following week’s playoff against Peru, in which the winner will qualify for the World Cup.

“We’ll go back and review the game. There’s a lot to work on still.

“We’ve got another six days before the UAE game. (There’ll be) no days off, it’s all work, and we’ll get things right.”

Rather than pick his best 11, Arnold experimented with his line-up against Jordan, giving Central Coast Mariners defend Kye Rowles his first cap and also starting with a host of other fringe players, including centre-back Wright, left back Jason Davidson, midfielder Kenny Dougall and striker Nick D’Agostino.

It led to somewhat of a disjointed start, with Jordan capitalizing to go ahead in 18th minute via a long-distance effort from Al-Tamari.

Aided by a lack of urgency from the Socceroos defense to reduce his time and space on the ball, Al-Tamari unleashed a first-time strike from outside the penalty ahead that sizzled past outstretched goalkeeper Mat Ryan on its way to the back of the net .

Jordan should have had the chance to double its lead from the penalty spot in the 39th minute when Wright brought down striker Ali Olwan.

However, the referee waved play on, and with the VAR system not in use, Jordan’s justified complaints fell on deaf ears.

Given a reprieve, the Socceroos immediately pounced, with Wright equalizing with a powerful header from Goodwin’s free-kick.

Jordan had a great chance to regain the lead on the hour mark after springing the Socceroos’ attempted offside trap.

But with only keeper Ryan to beat, substitute Yazan Al-Naimat failed to hit the target.

The wasted opportunity was to prove costly, with the Socceroos grabbing the lead eight minutes later.

The goal again came from a set piece, with Jordan unable to deal with a corner,

The ball eventually fell for Mabil, who scored from close range. The goal stood despite Jordan claiming Mabil was in an offside position.

In a positive sign for the Socceroos, underdone midfielder Aaron Mooy – who had not played a match since February – lasted about an hour before being replaced by France-based Denis Genreau.

Mooy’s class was evident when he hit the post with a sublime free-kick in the 50th minute.