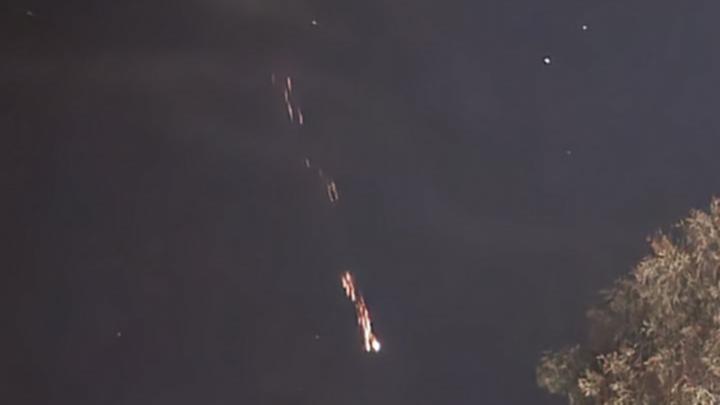 A Broome couple has recounted their initial shock at capturing space junk entering the earth’s atmosphere over Broome, saying at first they thought it was “something more sinister”

Woken in the early hours of Monday morning by a police chase outside their property, Broome couple Tasha and Glen Brough were sat on their driveway when their dog Odin began frantically looking up into the sky.

“Odin was looking at me, then up at the sky, then at me again and we were like ‘what’s he looking at’,” Glen said.

SEE MORE IN THE VIDEO PLAYER ABOVE

“Then we looked up and saw it. To be honest it kind of scared us for a few seconds.

“It honestly looks a bit like missiles or something, and then there was a massive boom, which we have now learned was caused by the junk entering the atmosphere.”

After checking Australia wasn’t under attack, Glen immediately wiped out his phone to capture the phenomenon.

“It’s a once in a lifetime opportunity to see something like this,” he said.

“Pretty crazy that we happened to be up at that time, outside and looked up to see it.

“I think we have Odin to thank really, he’s the reason we looked at it.”

After posting the video on social media, the couple was contacted by numerous astronomers and space-junkies who did some digging to find out exactly what it was.

“We’ve been told it was a Chinese long march rocket sent to space in 2021 to place a data communication satellite,” he said.

The Chinese Long March rockets, or LM-9, are used to send various orbital satellites into space, and once they succeed break into pieces and join the glut of space junk orbiting Earth.

“We haven’t really been too interested in what’s happening in space before, but after this we’ll definitely be looking up more,” Tasha Brough said.