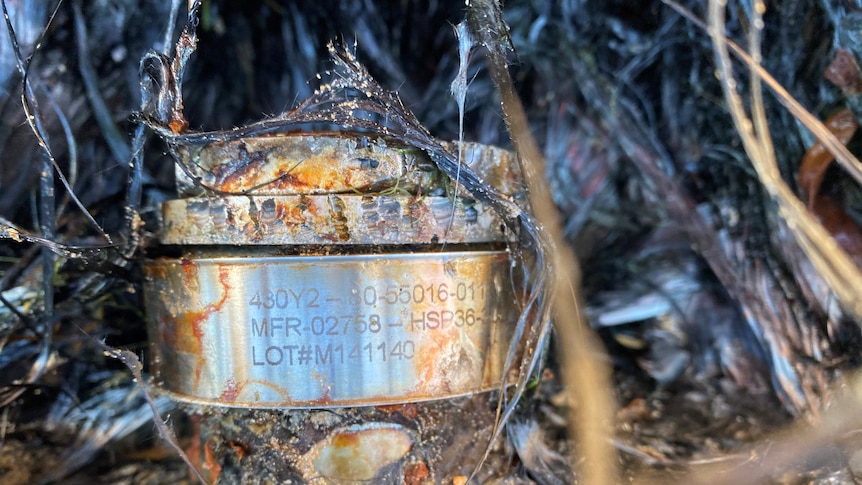 A year-long mystery has been solved after residents of a coastal took it upon themselves to collect a strange black cylinder wedged into a beach waterway.

Yambuk resident Matt King said he found the unidentified object in September 2021 while walking his dogs along the beach.

He had no idea what the “weird bit of stuff” was but knew it was out of the ordinary in a town known for its beautiful estuary, wild beach and tall slide.

Curiosity and wariness of ocean contamination compelled Mr King to reach out to Colleen Hughson, an ocean plastics campaigner who was awarded Warrnambool citizen of the year for her hands-on environmental work.

Ms Hughson’s credentials for investigating strange things that wash up on beaches are well established in the region.

She runs several local beach clean-up crews that document and log endless data about the hundreds of kilograms of junk that wash up along the south-west coast of Victoria and has found all kinds of strange objects over the years.

Ms Hughson said she reported the cylinder to the local police (case it was a bomb), accounts in notifying the Australian Space Agency, a photograph of the object on her social media and then expected shared by the authorities to collect the item.

In the meantime, people began sending her articles about other space junk found around the world.

“A lady from Tasmania actually sent us an article of a really similar thing that had landed in Washington on someone’s farm,” Ms Hughson said.

“It was this composite pressure vessel that contains the rocket fuel of the rocket ships.”

The realization that discarded space objects could re-enter the earth without disintegrating sent Ms Hughson down a rabbit hole of information about spacecraft junk that was intentionally directed to an uninhabited zone in the ocean.

Astronomer Dave Reneke said the existence of a space cemetery in the ocean was old news but not commonly known.

“There’s a part of the ocean there that not many people know about called the space graveyard, or cemetery,” Mr Reneke said.

“It’s a place where all spacecraft go to die, if you will.”

He said it was 4,000 kilometers off the eastern coast of New Zealand and about 3 kilometers deep.

“It’s the most farthest place from any landmass on Earth,” he said.

‘It came from up there’

A year after the cylinder was first discovered and reported, it was still floating in the river at Yambuk.

Mr King and his dogs had walked passed it one too many times.

Knowing that the river mouth would soon open again, he mustered a group of locals and litter campaigners to take matters into their own hands and get the disintegrating object out of the estuary.

Love Our Street litter campaign founder Jill Sokol traveled from Melbourne with her aeronautical enthusiast husband Harry to take part in a regional beach clean-up, and they got far more than they bargained for.

“I actually have absolutely no idea what it might be. I’m taken with the theory that my husband Harry has proposed, that it is something that has fallen out of the sky,” Ms Sokol said.

“Whether it’s come from an aircraft or a space craft of some sort, I’m mystified.”

“It’s got a metal core cylinder which is not corroded, some yellowish coating which might be a kevlar coating, all followed up by a wonderful bit of carbon fiber laminate,” Mr Sokol said.

“It has a serial number, which implies they made more than one of them, whatever it is,” he said.

Time to duck for cover?

“I got a reply straight away,'” she said.

After just days, the agency was able to confirm with Ms Hughson that the object had definitely fallen from space, which they had verified with the ABC.

“It is an over-wrapped composite pressure vessel, so it is a canister that contains rocket fuel for a space rocket,” Ms Hughson said.

“It turns out that quite a few have dropped down to planet earth, about one a year.

Ms Hughson appeared to be satisfied by the confirmation and conclusion of her detective work but now has a whole new source of potential ocean pollutants to monitor and campaign about.