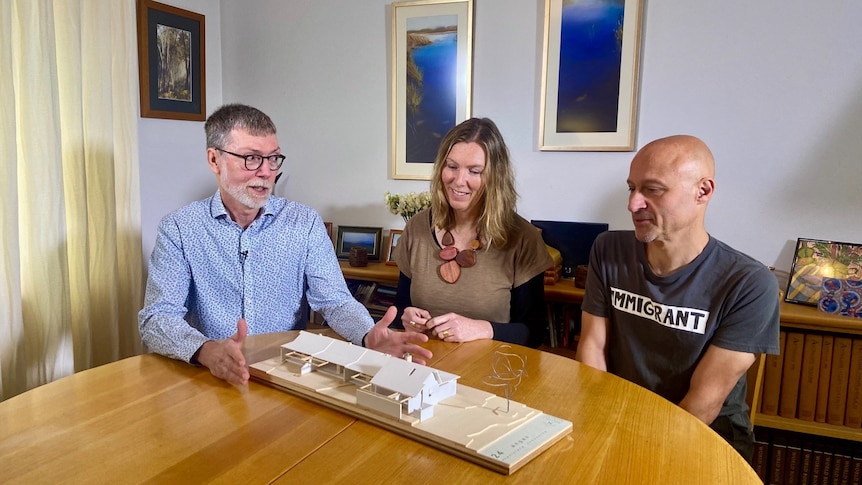 A group of Canberrans keen to reduce their environmental impact and downsize are creating their own sustainable co-housing community in Canberra’s north.

Three couples are planning to build a small co-housing project in the suburb of Ainslie called Stellulata Cohousing.

The group originally planned for the building to serve as a way to retire into smaller units, however, they say it’s not just for retirees, with the latest couple to join being in their 40s and 50s.

The co-housing building is designed to appear from the street as one large house, but will actually contain three attached one-storey units and one shared building.

Stellulata Cohousing says the build is focused on sustainability and will include solar panels with battery storage, high-efficiency electric appliances for hot water, heating and lighting, and rainwater harvesting.

The ACT government selected the design to be a Demonstration Housing Project, which aims to showcase ways to deliver a compact and active city through innovative planning, design and delivery.

Jillian Reid and James Godfrey are the newest couple to join the community, having moved to Canberra from Sydney in the hopes of finding somewhere to live that had sustainability in mind.

Ms Reid said they had originally planned to buy a home on their own in Canberra and renovate it, but found it difficult to find somewhere that was not too big and was focused on sustainability.

“For us to buy one of the old houses and renovate would have been more space than what we needed,” she said.

“We then turn to townhouses and that is also appealing but the sustainability features in a townhouse, you come into the same challenges as with apartments.

“Being able to control the energy, have solar, have batteries, rainwater management, it was really challenging to get that in a townhouse arrangement.”

She said that after finding Stellulata Cohousing’s website, she got in contact with the group and quickly joined the community.

“The appeal was the location, but [also] the design. The sustainability principles were all central to the design,” she said.

“That combination of private space – which was the right amount of space for what we need – together with the garden and all of the sharing components of that.

Future resident Ian Ross said the overall response to the project has been positive, with many expressing a desire to retire with friends once told about the design.

“The most common response we’ve had is people who say, ‘Oh, we’ve been talking with our friends about this for ages,’ you know, getting together when we retire and living together and having an enjoyable, supportive time, “he said.

“In particular, people in our situation who were in a big house, know that they’d like to go somewhere smaller, but they don’t want to move out of their neighbourhood.”

Ms Reid said as part of their involvement with the Demonstration Housing Project, once built, Stellulata Cohousing will have open homes at the property for five years, allowing Canberrans a chance to view the sustainable design.

She said seeing the completed building could result in similar co-housing structures appearing, but that co-housing communities were only one part of solving housing issues.

“I would absolutely expect that this should become more common, but this is not the only answer,” she said.

“It should play a role in ‘how do we solve the density?’ question, the housing questions, and do it in such a way that has a sustainability focus, that has a community focus, that actually maintains all the good things that we have now in the suburbs.”