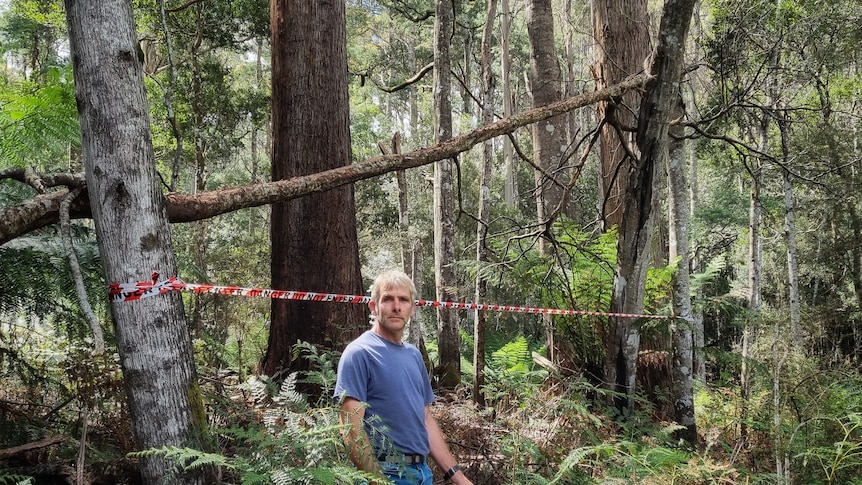 A Tasmanian farmer says he is outraged over being given almost no notice of native forest logging next door, despite earlier being told the land was likely not a logging target.

Over a year ago, organic apple farmer Neil Fuller was told by the state’s public forestry company that they were “unlikely” to log the native forest alongside his property, on the side of Mount Tongatabu in the state’s far south.

He did not hear anything else about it until 4pm on October 27, when he received an email from Sustainable Timber Tasmania (STT) with a notice saying that logging would start the next day.

Attached was a Forest Practices Plan (FPP) detailing that forestry roads would be constructed and 19 hectares would be felled.

It came as a shock for Mr Fuller.

“We contacted STT several times asking for answers, and they weren’t forthcoming with replies. We didn’t receive any replies at all, until chainsaws were already operating in the coupe.”

Mr Fuller first became aware of the potential logging through hearsay in 2021 and, worried about the loss of biodiversity on the land, he registered with STT as an interested stakeholder.

Forestry Watch — a citizen scientist organization whose data is occasionally used by STT — carried out a habitat assessment in August 2021 on the coupe, which sits within the southern forests Swift Parrot
Important Breeding Area.

Get Tas alerts on the ABC News app

Here are the steps to get breaking news alerts on the latest Tasmanian stories directly to your phone. 🇧🇷

Forestry Watch used this metric to find that two of the coupe’s sections were high-density habitat and one was medium.

One section had 10 trees per hectare greater than 1 meter in diameter at breast height, and a further 10 per hectare with recorded nesting hollows.

All relevant trees are stringybark — one of the most common swift parrot nesting habitats. Forestry Watch cited FPA guidelines in its view that logging should not occur.

He believed this was the end of the matter, and heard nothing further until the FPP email arrived in his inbox.

Once the FPP is certified, logging can occur without objections.

Forestry Watch said its research was ignored and it could not see how the values ​​in the coupe could be overlooked.

Alex Wylie, who carries out habitat mapping and swift parrot monitoring for Forestry Watch, said there was usually more consultation over native forestry logging, and described this as “a pretty extreme case”.

He said Forestry Watch had mapped about 40 coupes for STT but were not consulted further on this coupe.

“We provided our data, then a year later without any discussion or clarification, they’ve produced an FPP that directly neglects our data”, Mr Wylie said.

“It would’ve been good to see their datasets to see how they’ve managed to neglect what we found.

“If I was a neighboring property owner, that would concern me.

“Not just because the FPP came an hour before 5pm, but that community members weren’t being included as part of the discussions.”

The coupe – called KD045E – is among the 388 hectares in the Permanent Timber Production Zone land on the eastern side of the Mount Tongatabu ridge line.

It is not old growth, with Mr Wylie saying it was likely to burnt during bushfires in the 1960s.

Rather than fully clear-felling, STT will carry out aggregated retention in KD045E – a method where clumps of forest are kept, and the remainder fell and burnt.

It is then regenerated as native forest, a process that can take decades.

Mr Wylie said that even with aggregated retention, it was difficult to understand how conservation guidelines had been adhered to, based on his research.

In July, STT included the coupe in its three-year wood production plan, a precursor to being harvested before 2025.

Of the 388 hectares in the Mount Tongatabu zone, 289 hectares are managed for protection and excluded from logging.

STT conservation and land management general manager Suzette Weeding said it had carried out enough planning for the coupe.

“Sustainable Timber Tasmania has undertaken over two years of detailed operational planning and extensive stakeholder engagement with neighbors and some members of the local community regarding forest coupe KD045E,” she said.

“The operation has been designed to exclude most mature trees from harvest with additional provisions to retain other mature trees within the harvest area where it is operationally safe and practical to do so.

“Sustainable Timber Tasmania notes that through the recent court action the neighboring land owner has apparently aligned themselves with environmental activist group The Wilderness Society, who actively seek to end all native forest harvesting in Tasmania’s forests.”

The Wilderness Society (TWS) had taken STT to the Supreme Court over the FPP, which had redacted the identity of the certifying officer.

The court this week granted TWS access to the unredacted documents, including “the contractual or employment relationship” between the certifying officer and STT.

On Tuesday, STT provided a new FPP to Mr Fuller and other stakeholders.

Here’s a taste of the latest stories from Tasmania 📰