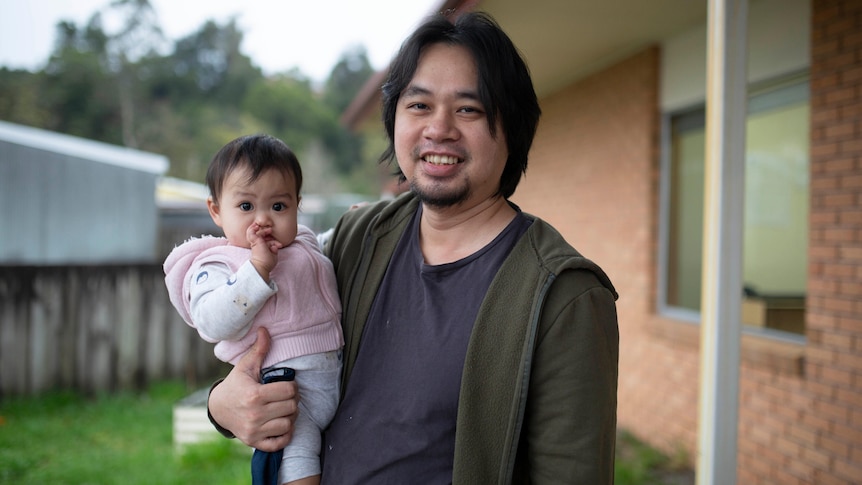 Bryan Soriano is a stay-at-home dad for nine-month-old Luna.

It was the only practical option for his family when his wife returned to work and securing childcare on Tasmania’s west coast was impossible.

“I was the head chef at the Empire Hotel [in Queenstown] but then my wife started to work at the hospital again,” he said.

“I had to quit because she earns more than me, we both want to work because we’re paying a mortgage but I had to quit just to take care of Luna.”

They had a six-month wait to secure any childcare at the only center servicing the entire west coast region.

Even then, it was for only half the number of days they needed for both parents to work full time.

“We follow up all the time to see if there’s any available spot for my bub, it’s stressful,” Mr Soriano said.

The center is accredited to care for up to 25 children each day but, on average, only had around half that number due to the difficulty in securing qualified educators in the region.

The demand for childcare in this historically boom-and-bust mining region is increasing, with another influx of mine workers underway.

The Avebury nickel mine, near the town of Zeehan, has reopened after 13 years in care and maintenance mode.

“The plan is to be in production before the end of September, be selling Tasmanian nickel concentrate out into the world market before Christmas and then we’ve got a long life ahead of us for those 200 people.”

Although the work is plentiful, the region’s housing is not.

The houses across the west coast were mostly built in the 1970s, and it is rare to see new build or renovation works underway.

Old single dormitories in Zeehan will be knocked down to make way for new two-room cabins for drive-in, drive-out workers, but family homes are hard to find.

“Some of the people coming actually want to move their families to live on the West Coast and we’re helping them to do that,” Mr Lamb said.

Rosebery real estate agent Jenelle Carey said the lack of new housing posed a challenge for people wanting to move their family to the region.

“When they come here, they’re used to a lot more modern properties, they’ll often ask us for the en suite and the two bathroom, we’re lucky if we ever find a house with an en suite,” she said .

“Rental demand is just huge, we may have a couple of properties available for a very short period and they’ll get snapped up really quickly.

“Our vacancy rate is practically zero.”

The West Coast Council has the state government about releasing crown land for housing development.

“[Mallee Resources] are looking at a camp in the first instance but hopefully that will lead to housing in the future for families,” he said.

“What we’d like to see round here on the west coast is families because then that improves our education and also our health [services] for this area.”

Even for those with a desire to build a new home in the region, Mr Pitt said there was a lack of land available.

“We believe there are some blocks in all our towns around the west coast that could lend itself to some development of housing but that’s tied up at the moment in crown land, so we’re talking with the state government in regards to that,” he said.