Teddi Mellencamp hosted an “Ask Me Anything” session on Thursday, during which the former Real Housewives of Beverly Hills cast member answered questions about her past cast mates and other Bravo topics.

In addition to sharing her reaction to Dorit Kemsley and Kyle Richards‘ drama and Garcelle Beauvais‘ shadiness, Teddi teased Tamra Judge‘s return to The Real Housewives of Orange Countyshared who she’d like to appear alongside on Real Housewives: Ultimate Girls Tripand offered an update on her friendship with Crystal Kung-Minkoff.

“How has your friendship with Crystal changed since she joined the show?” a fan asked Teddi during her Q&A on September 22.

“It actually’ hasn’t changed because we were never best friends, so there wasn’t a part of me that didn’t get to see her as much or anything like that. We were part of the same friend group, which we still are,” Teddi replied. 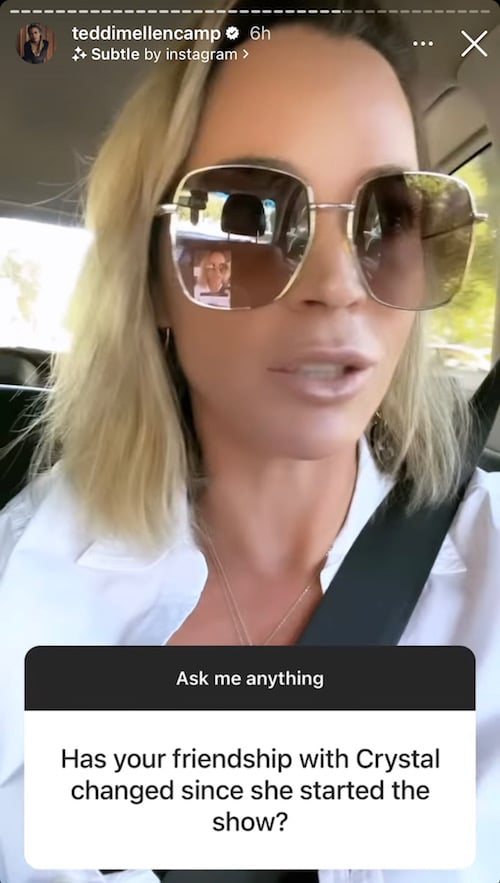 Another fan wanted to know how Teddi felt about Dorit’s recent shade toward Kyle, including her comments on Wednesday night’s Watch What Happens Liveduring which Dorit described Kyle as long-winded and said she was a bigger pot-stirrer than she’d admit.

“That actually kinda bums me out watching it because I have seen them when they’re at their best, getting along, and it’s so much fun. and wattH What Happens Live last night made me feel sad,” Teddi admitted. 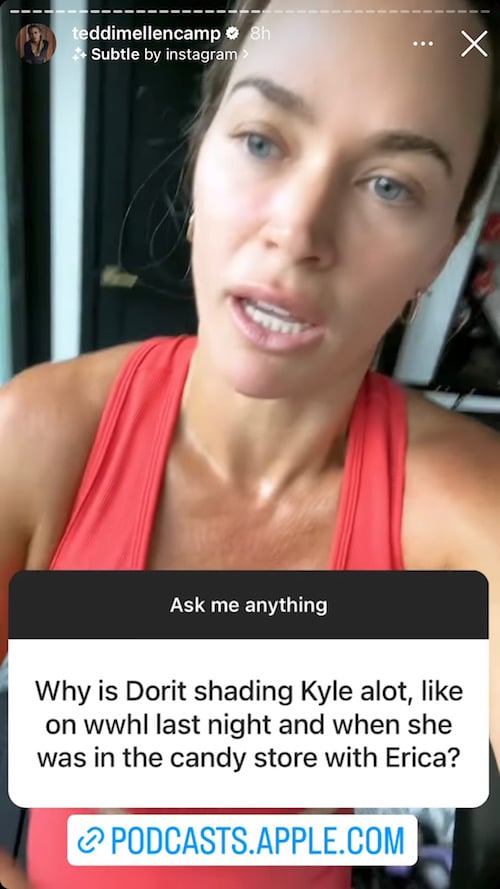 A third fan asked, “Is it me or does [Garcelle] seem to be a sh-t stirrer?” and claimed she “has no story of her own her.” But Teddi didn’t agree, saying that the actress is “excellent” for RHOBH.

“I think she does great confessionals. She throws good shade,” Teddi noted. 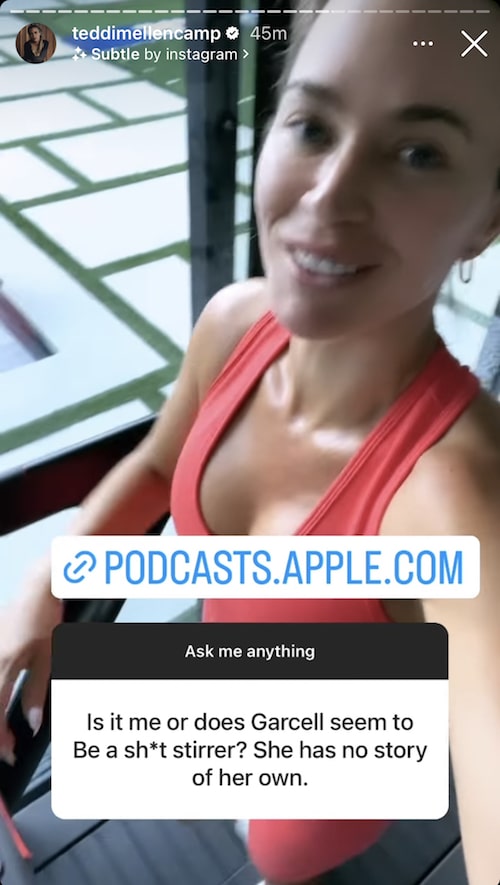 As for Tamra’s season 17 return to RHOCTeddi told a follower, “Let’s just say, no one’s gonna be disappointed about Tam.” 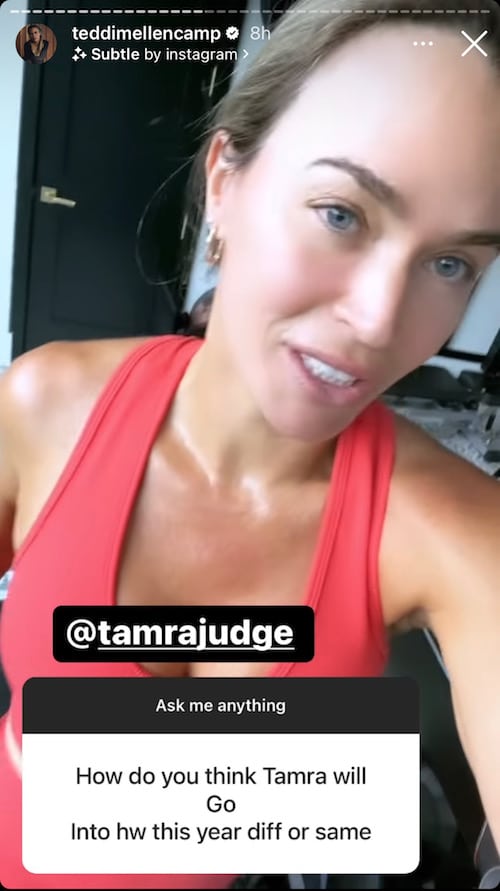 Someone else wanted to know who Teddi would like to attend a season of RUGT with. 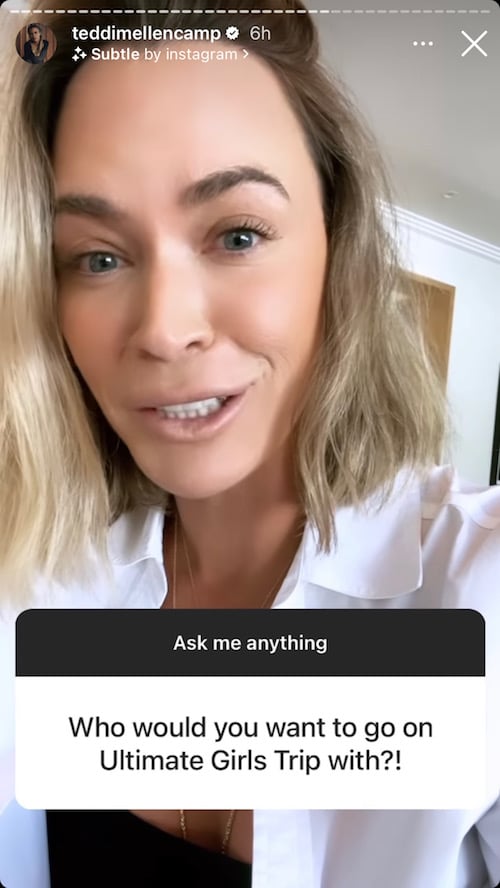 She also added of a potential RHOBH return, “I never say never,” and clarified why she was so triggered by tardiness.

“The reason I have fear whenever it comes to being late and I despise when other people are late is because well, the year I got my birthday taken away and got a big spanking was because I was late to something and Madonna and Sean Penn were at my house,” she shared.

Then, another fan wanted to know if she’d ever have Andy Cohen on her and Tamra’s podcast, Two Ts in a Pod.

“I would absolutely love that. Are you kidding?” she replied. “I am working at BravoCon. I am doing the Project Runway panel and doing Two Ts in a Pod. So Maybe I can talk to Andy then.” 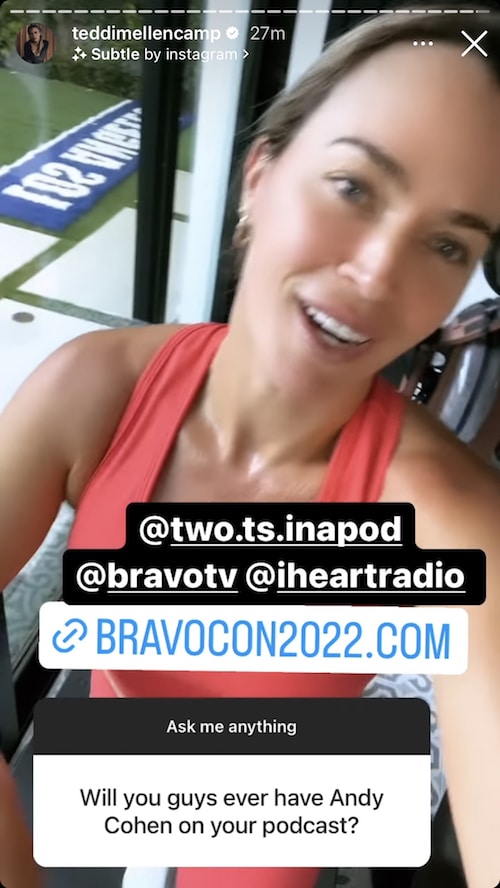 Also, during her Q&A, Teddi gave a nod to her drama with Jim Edmonds when asked about the juiciest story she’s leaked on her podcast.

“I’m guessing me sharing the text messages from a certain… James Bond,” she explained, signaling to the messages she received from the RHOC alum after poking fun at his and fiancé Kortnie O’Connor‘s James Bond-themed wedding invitations.