I watched the Tigers play Sydney in Tiger heartland: The Corner Hotel on Swan Street. I was catching up with a couple of friends and the plan was to have a meal, watch the game and catch up.

The game started and I was mostly paying attention. I had pretty low expectations of the Tigers and, honestly, was grateful to be heading into the bye. It felt like we were just starting to get a bit healthier and get rolling, but then the injury bug struck again.

I figured with no Kane Lambert, Tom Lynch or Noah Balta – arguably three of the seven or eight most important tigers alongside Dylan Grimes, Dion Prestia, Dustin Martin and now probably Shai Bolton – we were a pretty slim chance. We’re not as deep as we once were in my view, so losing one of that first-choice 22 really seemed like it would hurt more than in the glory years of 2017-2020 where it felt like we could absorb anything.

I had the game going in the corner of my eye and saw Sam Reid kick the first one, then Lance Franklin missed a set shot within the first five minutes and I figured that I was right. Away from home, missing key players, we’re not going to win this one. Like I said in one of my first-ever columns, my relationship with footy has changed to a point where it just didn’t hurt as much.

The stakes were no longer life and death after that 2017 flag and the subsequent addition of two more to the trophy cabinet.

But then something happened. Hugo Ralphsmith, one of the Tigers whom I have viewed as emblematic of the erosion of depth at Tigerland over this dynastic run, kicked a goal. From there, all of a sudden a game broke out. It was a goal for goal until, at the end of the quarter, the Tigers kicked three goals on the trot.

Each goal kicked by a player from a different era – young Ralphsmith kicked his second and I started to rethink my stance, mid-career resurgence Dan Rioli kicked a rare one trotting up from half back (an inspired coaching move) and then the old warrior Shane Edwards kicked one in what looks like his last year. Tigers 8 points up at the break.

I’m not talking to my friends anymore.

The second quarter was a pretty dominant Tiger term led by Dustin Martin. I don’t know if he’s going to leave for the Swans but to me, he didn’t look like a guy who wanted to be anywhere else (note the end of the game where he and Jack Riewoldt were the two in the umpire’s grill begging for 50m to be paid).

He was applying real defensive heat and regularly broke into a sprint. In other games this year he hasn’t even gotten out of third gear and has still regularly been one of our best, but in this game he looked engaged.

Buddy kicked one on the stroke of halftime, but the Tigers were up 25 points up at the big break.

We were on here.

Opening up the third quarter, Jayden Short kicked the first one and I thought that we were home. That arrogance of all those years of dominant football, just blowing teams away in a quarter and holding them at arm’s length for the rest of the game came roaring back into my head.

I settled back into conversation, only looking up really to boo the ex-Prime Minister along with the rest of the pub, SCG and whole country.

The next time I looked up, Buddy had flames coming out of his rear end.

He’d just kicked one from the center square – at the SCG probably a 48-metre kick, but regardless, it felt big. Buddy is, along with Jimmy Bartel, my favorite non-Tiger ever. I’m not breaking news here but gee whiz he is a sensational footballer. He’s such a rare combination of power, speed, ego and just a disgusting ability to kick a football.

All of a sudden, it was a three-goal game. The pub was engaged. My heart was racing. I was pacing and sweating and wearing. My mates had stopped talking about the election. They, the pub, everyone was right there with me.

That arrogance I mentioned earlier gave way to something much more familiar. A combination of dread and pre-grief. It’s the same feeling I get every time the camera cuts to Silvio in the car with Adriana.

I felt sick to my stomach. It hurt.

When Buddy kicked the first of his three in the final term he made it an 8-point game and it was vintage Buddy. He went up for the mark, landed like a man half his size, received a handball from Tom Papley and goal. 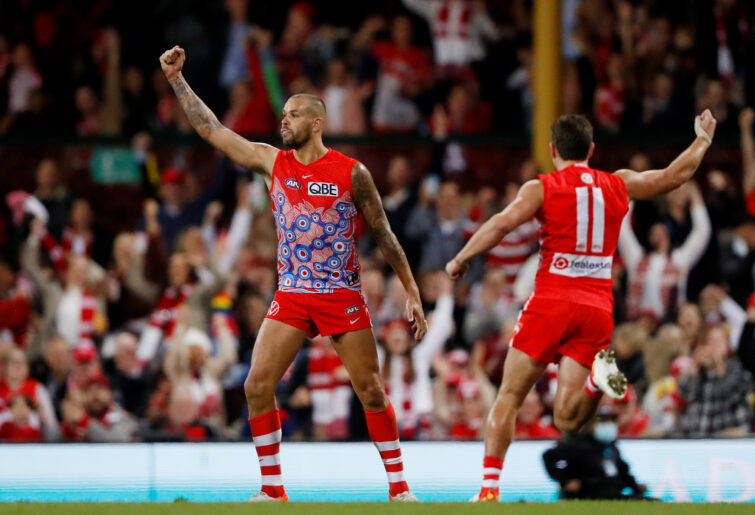 Silvio has just turned into the woods. Adrianna is crying. Everyone has cottoned onto what’s about to happen.

The rest of the game is a blur, a Richmond pub in Richmond heartland was heaving and I was right there with them, sweating out a game that we genuinely didn’t know if we were going to win.

There is one moment that I remember clearly. Buddy had just kicked a goal off a free kick against Josh Gibcus. The free kick was clearly a call that only a superstar gets against a first-year player. Probably there, incredibly soft. Tom Lynch doesn’t get that free kick because he’s officiated like Rob Gronkowski in 2015, Aaron Francis doesn’t get that call because he’s just not good enough. Buddy gets it because he’s Buddy.

Gibcus off Buddy. Grimes onto Buddy.

Then the Swans kick another one, this time it’s Will Hayward on the back of an inexcusable inability to kill a Luke Parker shot over the line – also known as the Robbie Tarrant special. If Carazzo is Italian for turnover, Tarrant is German for “refusing to punch the ball and/or being atrocious at ever getting a fist to a ball”.

Two-point game. Momentum with the Swans.

Then Buddy again. He’s kicked his third of the quarter. Flames are, at this point, emanating from every pore. Every orifice. This time he dobbed one from right on “50” off a center bounce that should have been called back and inexplicably was not. The bounce that clearly favored the Swans. Tigers screwed by the umpires again. Eighteenth in free kick differential because the umpires hate us.

Edwards misses. Bolton misses. Baker, Rioli and Baker, three of my favourites, make calamitous errors in the back line that leads to a Sydney goal. This time I blame the turf for causing Rioli to slip. Clearly the worst surface in the AFL since Marvel has cleaned up its act. 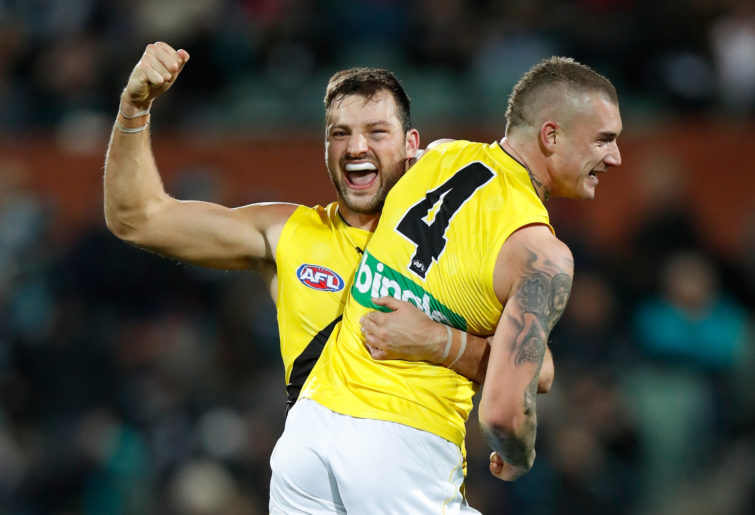 Prestia bombs it in. Riewoldt brings it to the ground and gathers the ball. Hand pass to Martin. Martin steps Parker. He snaps truly. Goal. Sydney by 1. Tigers arrest the slide. I was jumping around, ecstatic.

He doesn’t miss those.

I, along with the rest of the pub, stood there in disbelief. He doesn’t miss those. For five years I have entrusted him with my happiness, and he’s always delivered. This time he didn’t. I couldn’t fathom it. It must be how I imagine Bulls fans felt whenever Michael Jordan missed a midrange pull-up when the game on the line.

We can fast forward now to the end of the game. The Tigers lose in ignominious fashion. The whole pub is seeing at the sight of the 50 that wasn’t but should have been paid to Prestia. We are all in disbelief. We’d given the Swans to run away from home, but we’d lost. But it wasn’t our fault that we lost. It was those damn umpires.

“Nobody else gets stuffed over by the umps, just us,” I mutter to myself as I’m walking out of the pub.

I got home and became even more mad as I saw the footage of the Essendon player doing the same thing on the stroke of halftime against Freo and Freo getting 50.

But then I stopped and looked at myself and thought: “Oh my god. I’m back.” Not in the sense that this loss would ruin my weekend like it might have in 2014, those days truly are behind me, I think.

It was more in the sense that at least some of my detachment was kind of gone. This is such a likeable, tough Richmond side. It’s replete with players at all different stages of their careers, playing important roles. There are impressive young players like Gibcus and Maurice Jr. Emerging superstars like Shai Bolton.

Re-born guns in new roles like Short and Rioli. The old stagers like Trent Cotchin and Riewoldt still hanging on, producing occasional moments of their former brilliance but really getting by on nous and toughness (see Cotchin getting in the Buddy train’s way when on a lead).

They are just such a likeable bunch, led by a coach who has found himself in the papers more often than he would like and clearly is intent on not doing it again – medicinal marijuana use notwithstanding.

This Tiger team reminds me a little bit of Jack Nicholson in The Departed. You’re never going to see RP McMurphy again. Nor Jack Torrance. Certainly not Jake Gittes. You can feel it slipping away. The end of the window feels a little closer than the beginning did, given our continued reliance on older legends in big moments.

But sometimes they’ll produce something that will make you remember why you love them so much. This game was one such production.

This likeable bunch of Tigers could be anywhere from the third to the tenth-best team in the AFL have me back, caring about footy, yelling at umpires who miss 50s, and riding the bumps again.

I have a confession. Earlier in the column, I said that it hurt. That was true. But I would be lying if I didn’t say that it hurt so good.