Two of three men who escaped from a townsville prison farm this week have been located by police, with one more still on the run.

Police confirmed it’s likely the trio banded together and ‘walked off’ the property between 6.30pm and 8.30pm Monday night, launching a coordinated search by police and corrective services through the North Queensland city.

They were serving sentences for break and enter, armed robbery and assaulting police.

Quakawoot, 22, was located around 10.30am this morning and was arrested alongside a 22-year-old woman from a home in Stuart.

Police confirmed he is expected to be charged with escaping custody and possibly more charges.

The woman is assisting police with investigations.

Police confirmed they located him after tactical crime squad officers found a stolen Mazda CX 5 on Gosper Street, in Heatley.

Newman, who had been in the vehicle, allegedly ran from police.

He was arrested a short time later and charged with unlawful use of a motor vehicle and escaping custody.

Police confirmed they also arrested a 20-year-old woman who was charged with unlawful driving and driving without a license.

Noble, also 22, has not been located by police.

Police initially confirmed they left no trace when they escaped from the prison facility and it’s unclear which direction they were headed. 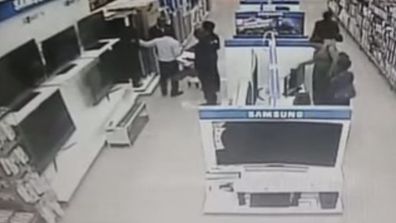 “Any time someone escapes from a correctional center their desire is not to go back,” Detective Senior Sergeant Chris Hicks said.

“If they are approached by members of the public there could be some there.”