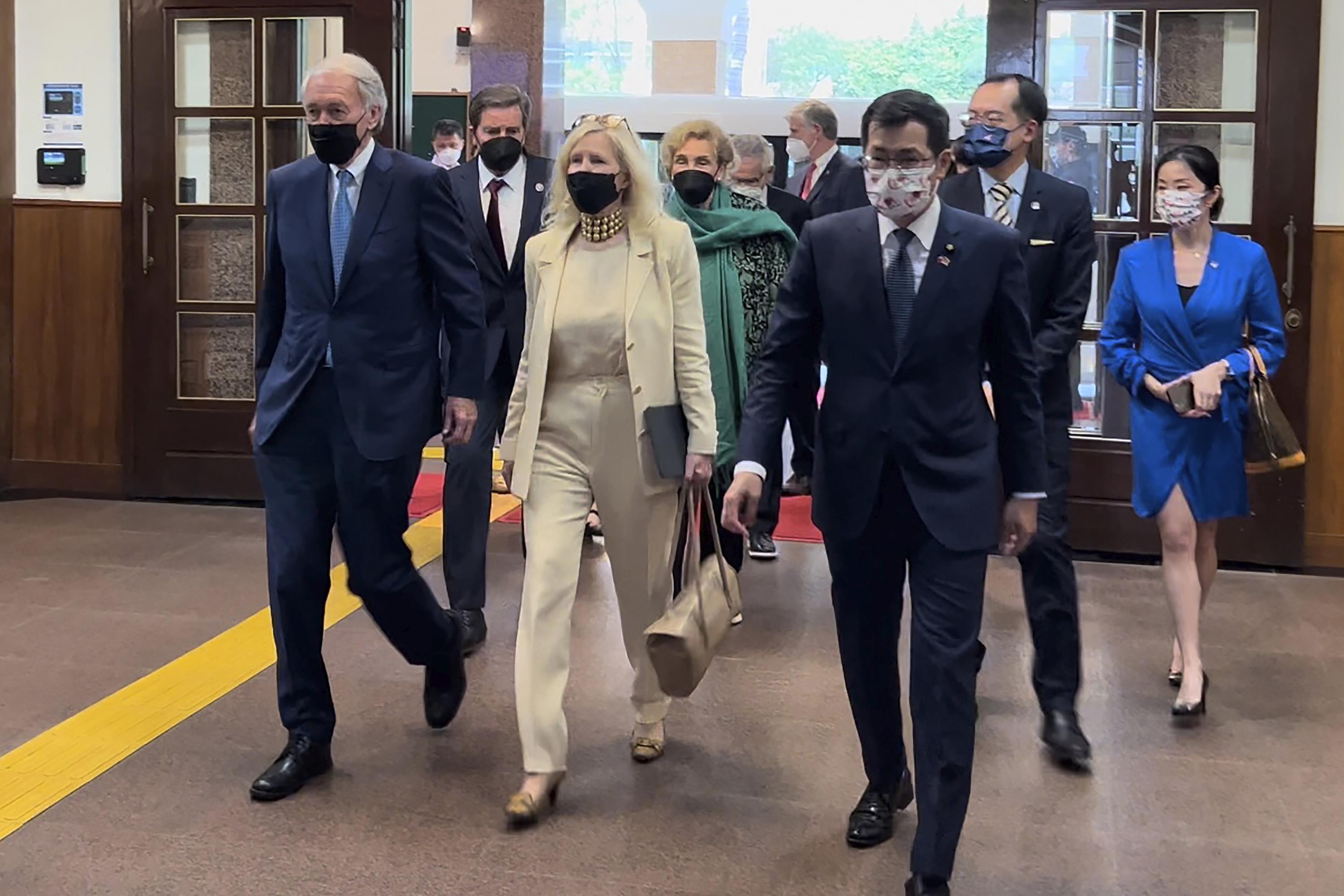 TAIPEI, Taiwan (AP) — Taiwan’s President Tsai Ing-wen met Monday with a delegation of US Congress members in a further sign of support among American lawmakers for the self-governing island that China claims as its own territory.

Taiwanese media showed the delegation arriving for the talks, but details of the meeting were not immediately released.

It comes less than two weeks after US House Speaker Nancy Pelosi’s visit to Taiwan, which prompted days of threatening military exercises by China, including the firing of missiles over the island and into the Taiwan Strait.

China has also sent warplanes and navy ships across the waterway’s median, which has long been a buffer between the sides that separated amid civil war in 1949. China regards formal contacts between US politicians and the island’s government as support for its independence from Beijing.

China says it wants to use peaceful means to bring Taiwan under its control, but its recent saber rattling has emphasized its military threat.

The five-member delegation is led by Democratic Sen. Ed Markey of Massachusetts and is to meet with other government and private sector representatives. Reducing tensions in the Taiwan Strait and investments in Taiwan’s crucial semiconductor industry are expected to be key topics of discussion.

The other members of the delegation are Republican Rep. Aumua Amata Coleman Radewagen, a delegate from American Samoa, and Democrats John Garamendi and Alan Lowenthal from California and Don Beyer from Virginia.

A senior White House official on Asia policy said last week that China had used Pelosi’s visit as a pretext to launch an intensified pressure campaign against Taiwan, jeopardizing peace and stability across the Taiwan Strait and in the wider region.

“China has overreacted, and its actions continue to be provocative, destabilizing, and unprecedented,” Kurt Campbell, deputy assistant to President Joe Biden, said on a call with reporters.

“It has sought to disregard the centerline between the PRC and Taiwan, which has been respected by both sides for more than 60 years as a stabilizing feature,” he said, using the acronym for the country’s full name, the People’s Republic of China.

China accuses the US of encouraging independence forces in Taiwan through its sale of military equipment to the island and engaging with its officials. The US says it does not support independence for Taiwan but that its differences with China should be resolved by peaceful means.

China’s ruling Communist Party has long said that it favors Taiwan joining China peacefully but that it will not rule out force if necessary. The two split in 1949 during a civil war in which the Communists took control of China and the losing Nationalists retreated to the island of Taiwan.

Campbell, speaking on Friday, said the US would send warships and planes through the Taiwan Strait in the next few weeks and is developing a roadmap for trade talks with Taiwan that he said the US intends to announce in the coming days.