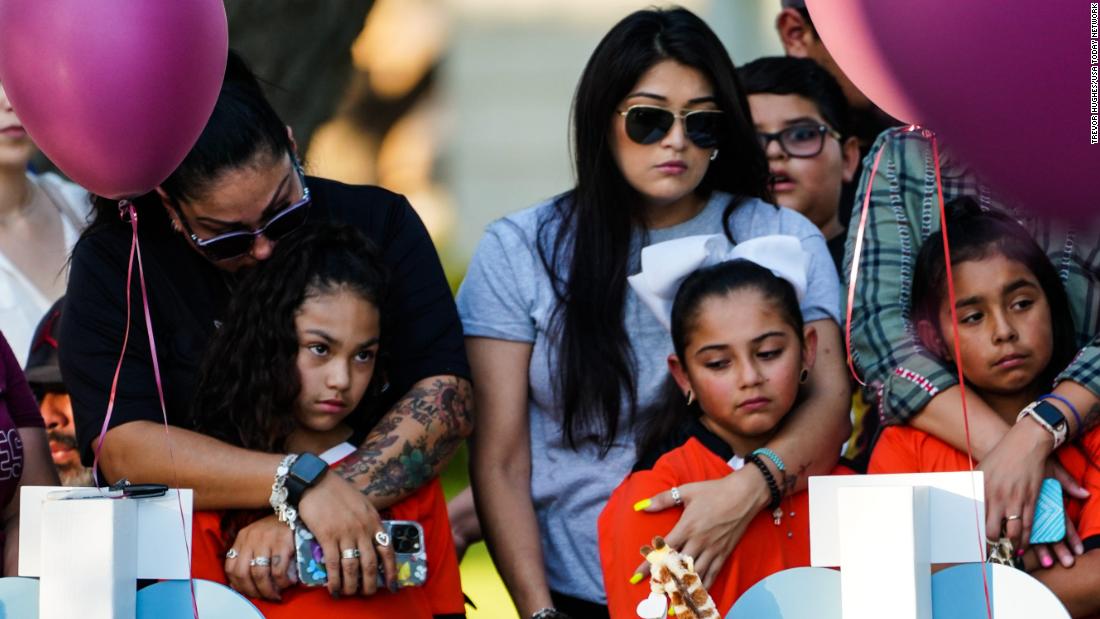 Eliahna was among the 19 students and two teachers who were killed by a gunman in their adjoining elementary school classrooms on May 24. The tragedy has devastated the town of Uvalde, Texas, where families continue this week to bury their children who died in the shooting .

Four people still remain hospitalized, including the 10-year-old girl in serious condition and the 66-year-old grandmother of the gunman.

Local residents have quickly formed a bedrock of support for the survivors and victims’ grieving families, including the Garcia family. Some businesses have begun having their employees wear the color purple and pass out purple goody bags to show support for those grieving Eliahna, who loved the color.

But as the community rallies around the grieving, frustrations remain high over officials’ lack of transparency about the horrific day. Officials have repeatedly changed the narrative of what happened in the attack, including key details on how the gunman entered the school, why police delayed confronting the gunman and how long it took for authorities to kill him.

Former Uvalde city councilman Rogelio Muñoz told CNN Sunday he believes mistakes were made during the police response, but multiple people should share the responsibility for law enforcement decisions made that day.

“The truth is often gray. It’s not black and white. You have the state authorities who responded who are throwing the local police under the bus. … The officers who responded were good honorable people who, in retrospect, made a mistake in judgment during a heightened situation,” Muñoz said.

Muñoz, who has no direct knowledge of what happened during the shooting, said he believes Uvalde School District Police Chief Pedro “Pete” Arredondo is one of those who share the responsibility for the law enforcement response. Arredondo is the one who made the decision not to immediately enter the classroom where the shooter was holed up with children and teachers, the Texas Department of Public Safety has said.

“Arrendo made mistakes that day, but he’s not the only one,” Muñoz told CNN, pointing out DPS officials also responded to the scene.

Arredondo was recently sworn into the city council seat previously held by Muñoz. The school police chief has largely stayed out of the public eye since last week and told CNN he will not be releasing further information while victims’ funerals are ongoing.

“We’re going to be respectful to the family,” Arredondo said. “We’re going to do that eventually. Whenever this is done and the families quit grieving, then we’ll do that, obviously.”

“How in the world are we going to be able to do anything if we can’t figure out what happened in that building in those 40 minutes?” Gutierrez said in an interview with CNN Friday.

The safety and recovery of surviving children in Uvalde has become an urgent priority for parents and local officials.

Students will not return to the Robb Elementary campus next school year and arrangements are being made to accommodate them at other schools, Uvalde Consolidated Independent School District Superintendent Hal Harrell announced last week.

The plan was reiterated at a school board meeting Friday night, but parents were left with no clear answers on the board’s plans to address the aftermath of the shooting.

Angela Turner, a mother of five children in Uvalde who lost her niece in the school shooting, was outraged at the lack of a clear outcome.

“We want answers to where the security is going to take place. This was all a joke,” she said after the meeting. “I’m so disappointed in our school district.”

Turner will not allow her children to return to school until they feel safe, she said, adding her 6-year-old child told her, “I don’t want to go to school. Why? To be shot?”

Robb Elementary joins a growing web of communities shaken by gun violence. So far this year, there have been 246 mass shootings in the US, according to the Gun Violence Archive, which, like CNN, defines a mass shooting as one in which four or more people are shot, not including the shooter.

Victims and families press for accountability from gun manufacturer

The family of a student killed in the massacre and a teacher who survived the horrors of that day are both demanding information from the manufacturer that made the firearm used by the gunman, according to court filings obtained by CNN.

The mother and father of 10-year-old Amerie Jo Garza, who was written killed in the shooting, had separate letters to Daniel Defense, the company that manufactures the AR-15-style rifle used in the attack.

Attorneys for Amerie’s mother, Kimberly Garcia, requested that Daniel Defense “preserve all potentially relevant information” related to the shooting, including “all physical, electronic, and documentary evidence potentially relevant to” the company’s marketing of AR-15-style rifles, according to a letter obtained by CNN.

Alfred Garza, Amerie’s father, also demanded information about the manufacturer’s marketing strategies, particularly to children and teens, as well as any communications the company had with the shooter,

“My purpose for being now is to honor Amerie Jo’s memory,” Garza said in a news release about the letter. “She would want to me to do everything I can so this will never happen again to any other child. I have to fight her fight her.”

Emilia Marin, a teacher at Robb Elementary, filed a petition Thursday to depose Daniel Defense, a court filing shows. The pre-suit petition does not accuse the manufacturer of wrongdoing but is investigating whether Marin has any basis to file a claim against the company.

“We need to hold these people accountable,” Marin’s attorney, Don Flanary, told CNN, adding her legal team has no plans to sue the school, police or school district.

Through their requested deposition, Marin’s attorneys are looking for facts surrounding the shooting, the possession and sale of the weapon used by the gunman, the death and injury caused by the gunman’s use of a Daniel Defense AR-15-style rifle. They are also seeking information about “Daniel Defense’s pattern of marketing of its products in a manner associating firearms, and minors, by positing on social media,” according to the petition.

Daniel Defense has not replied to multiple requests by CNN for comment.