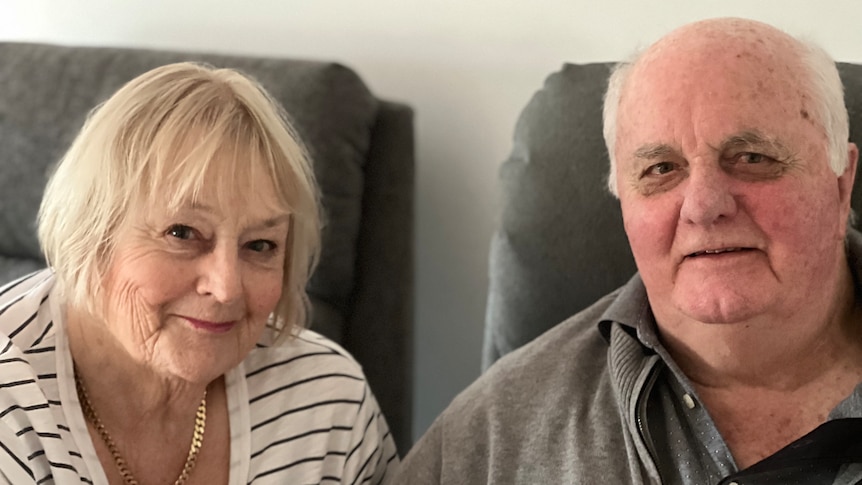 In his heyday, Alan Clark was a gun centre-forward who left everything on the field.

Footy was in his blood. He earned best and fairest accolades at almost every suburban club he played for and as a player-coach proudly led the Frankston reserves to a gritty grand final showdown in 1971.

They lost to the boys from Brunswick that day and the outcome still stings.

“They were far too good,” Mr Clark said.

“But our players were just a bit too sooky and we got belted.”

There was a joyous freedom in playing sport that Mr Clark never truly appreciated until now.

Diagnosed with progressive supra nuclear palsy, the 81-year-old is restricted to a single room in the house he shares with wife Zenda, in Warragul, south-east Victoria.

Mr Clark requires assistance to shower and use the toilet.

The brain disorder leads to problems with walking, balance, eye movements and swallowing.

There is no treatment or cure.

Doctors have warned he is likely to eventually die from choking on food.

“It’s amazing what little things you realize you can’t do,” he said.

“Day by day there is something else you can’t do.”

But a loophole legislative means he is restricted from discussing it during telehealth appointments.

Under current Victorian legislation, voluntary assisted dying can only be discussed with a doctor face-to-face.

Mr Clark said a telehealth appointment was his only option as in-person appointments had become increasingly difficult.

The couple urged a restructure of the law to ensure other Victorians restricted to their homes with deteriorating health could access specific VAD telehealth appointments legally.

“There are so many things happening with our families and it’s just beautiful.

“I would rather be here and have the option at some time when I’m really at the end of my life or suspect I am.

“Let’s meet everybody and say goodbye and then I can quietly pass on.”

Mrs Clark said it had been devastating witnessing her husband’s health deteriorate.

“I can’t explain how terrible it is to watch somebody you love just become completely dependent and completely helpless as the disease progresses,” Mrs Clark said.

No choice in personal decisions

“He’s an intelligent man and his greatest fear is that he will lose his ability to request the assisted dying because of a deteriorating cognitive function,” Mrs Clark said.

How will it work?

She said her husband of 35 years was a proud man who had played “every sport known to mankind”.

“He’s been a very good sports person and we have done lots of traveling and had a lovely life together,” she said.

“He’s confined to one room now. His world has become very small.”

Upper House MP Stuart Grimley said urgent changes to the federal criminal code were needed to ensure there was no ambiguity for medical professionals in discussing VAD with patients via electronic communications such as Zoom, Teams or over the phone.

“It wasn’t the intention of the federal code back when the laws were made over a decade ago; it was to respond to cyberbullying by predominantly teenagers. It’s unfortunately had unintended consequences,” he said.

Mr Grimley said a private members bill, clarifying the position of medical professionals and making them easier to access for people restricted to their homes due to ill health, was unlikely to be reviewed until after the Victorian election.

“This is not about watering down the legislation,” Mr Grimley said.

“It’s about making sure (it) works effectively.

“Something like 70 per cent of the population support VAD. That doesn’t mean that the other 30 per cent have to use it — it just means they need to respect other people’s right to choose.”

Melbourne GP and Dying with Dignity Victoria board member Dr Nick Carr is taking legal action against the federal Attorney General to fight what he calls an “extraordinarily prohibitive” law that prevents doctors from communicating via modern technology with terminally ill patients about assisted dying.

In an interview with ABC Melbourne, Federal Attorney-General Mark Dreyfus alluded to the issue being tabled at the attorneys-general meeting in Melbourne last week.

“I would invite Dr Carr to perhaps take a little bit of breathing space in this litigation because he should know, and I am saying publicly, that a number of states that have Voluntary Assisted Dying laws have asked me directly to look at this question, that is, the impact of Commonwealth laws on their regimes,” Mr Dreyfus said.