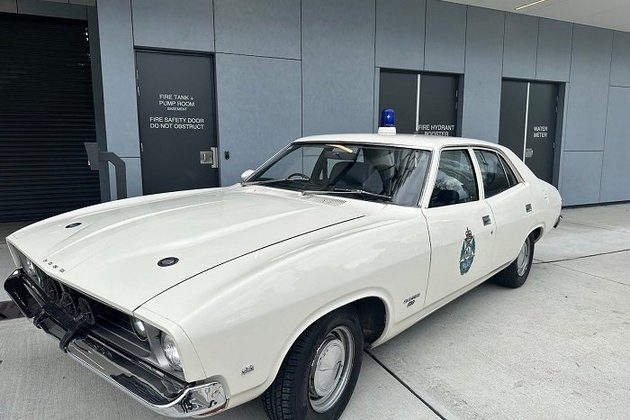 Editor’s note: Images of the touchstones and a historic police vehicle are available via Hightail.

The touchstones will be carried from the Queanbeyan Police Station, where they have been on display this past week, before being mounted to the Memorial Wall at the Dawn Ceremony.

Superintendent Dean Elliott said on National Police Remembrance Day, it is important to pause to pay tribute to the courageous officers who lost their lives in the line of duty.

“After two years of virtual services due to pandemic restrictions, we are pleased to return to in-person ceremonies which allow us to physically unite and pay the utmost respect to our fallen officers,” Superintendent Elliott said.

“These officers paid the ultimate sacrifice while protecting our community, so it is fitting to pay tribute to them by transporting in our vintage vehicles reserved only for significant occasions,”

“The AFP has appreciated the support of the NSW Historic Police vehicles team for the past 12 years, and we are grateful to have them return for another year.”

It is tradition that representatives of each jurisdiction whose members are being added to the wall play a role in the delivery of the touchstones. Members from the AFP, Northern Territory Police and Tasmania Police will participate in the service, carrying the touchstones of their fallen members to the Memorial Wall.

The traditional dawn service commemorating the loss of local police officers from the ACT and NSW Monaro Police District will be held tomorrow morning at 5:30am.

The vintage cars will be driven as part of the national march procession, which will feature current and former members from all policing jurisdictions, horses from the New South Wales Police Force (NSWPF) and Victoria Police mounted units, motorbikes, a banner party, AFP Pipes and Drums and the NSWPF band, as well as AFP and NSWPF police recruits.

The march will commence at 4pm at the AFP Headquarters, across the Kings Avenue bridge to the National Police Memorial in Kings Park, Canberra.

The day of commemorations will conclude with the national Dusk Service at the National Police Memorial in Kings Park at 4:30pm. Guests are asked to arrive by 4pm and all members of the community are encouraged to attend to pay tribute to our fallen officers.