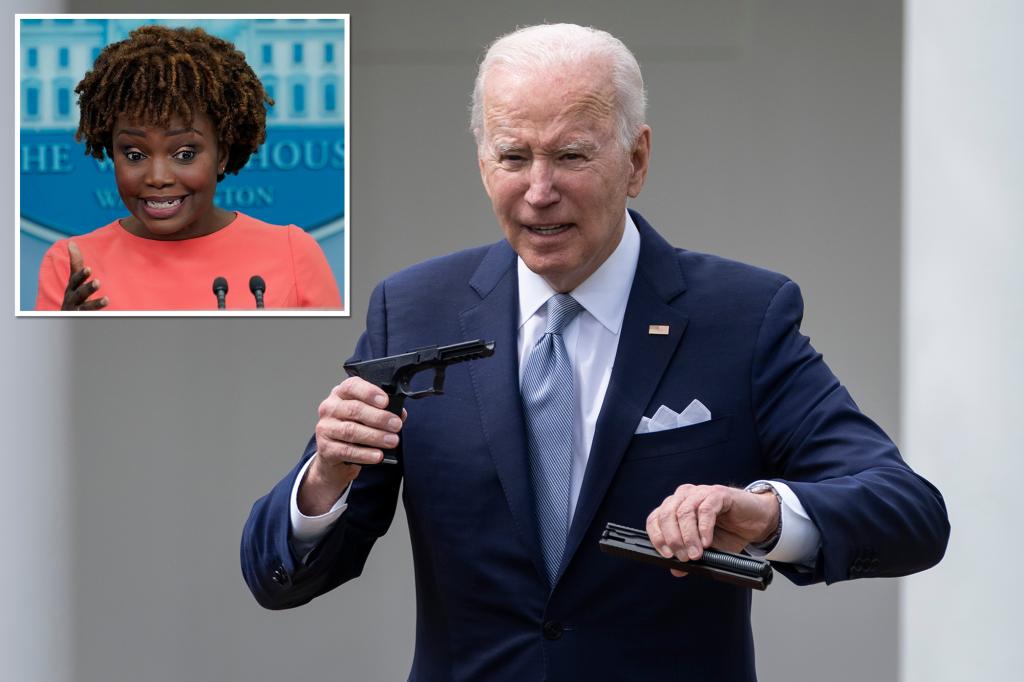 The White House said Tuesday that President Biden does not support a Canada-style ban on handgun sales in the wake of a pair of mass shootings last month — the latest example of administration members having to clear up their boss’s remarks.

“We’ll leave it up to other countries to set their policy on gun ownership,” Jean-Pierre said during her regular briefing. “The president has made his position clear: The United States needs to act. As I just laid out, he supports a ban on the sale of assault weapons and high-capacity magazines, and expanded background checks to keep guns out of the — dangerous hands.

“He does not support a ban on the sale of all handguns, to answer your question,” the press secretary added in response to Fox News’ Peter Doocy, who had asked: “Canada is making it impossible to buy, sell, transfer, or import handguns anywhere in that country. Would President Biden ever consider a similar restriction on handguns here?”

One day earlier, Biden appeared to suggest there should be restrictions on the 9mm pistol — the most popular handgun in the US.

“They said a .22-caliber bullet will lodge in the lung, and we can probably get it out — may be able to get it and save the life,” the president told reporters outside the White House on Monday after visiting the site of a mass shooting in Texas the day before. “The 9mm bullet blows the lung out of the body.

“So the idea of ​​these high-caliber weapons is, uh, there’s simply no rational basis for it in terms of thinking about self-protection, hunting,” added Biden, implying the pistol is a “high-caliber weapon” despite not being characterized as such by most gun experts.

At the same time, Biden admitted that he could not take sweeping executive action to solve gun violence, saying: “I can’t dictate this stuff. I can do the things I’ve done and any executive action I can take, I’ll continue to take. But I can’t outlaw a weapon. I can’t, you know, change the background checks. I can’t do that.”

Any gun reform legislation faces a steep climb to pass in Congress — particularly in the evenly split Senate.

Biden has vowed to meet with Congress on potential legislation on Tuesday.

The White House’s clarification came the same day as an NBC News report that Biden has grown frustrated with his advisers who have repeatedly cleared up or walked back various statements he has made — usually related to foreign policy.

The White House denied the allegations, with deputy press secretary Andrew Bates telling The Post that “no clarifications of the President’s remarks are ever issued without his direct approval.”

Bates did not address the implication in his statement that Biden had been annoyed at statements that he approved, further undermining the president.