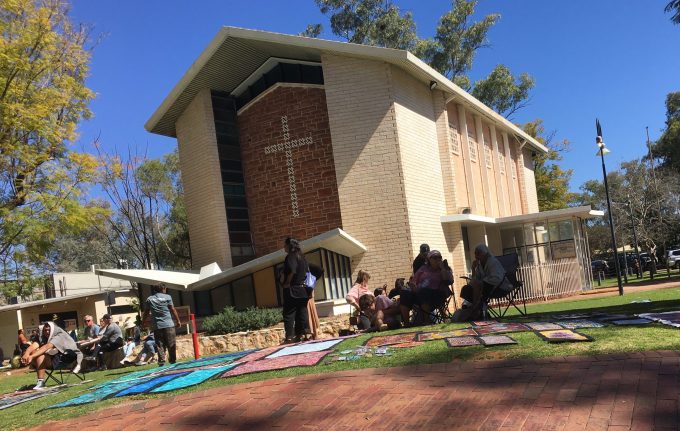 Many in the nation welcome Prime Minister Anthony Albanese’s commitments on the Uluru Statement from the Heart, including the formulation of a possible referendum question*, announced at the Garma Festival last month.

The winter sun was clear and bright, unlike the issues of a First Nations Voice to Parliament in the Australian Constitution and truth-telling between governments and Aboriginal and Torres Strait Islander peoples.

I spoke with 29 Aboriginal people, several of them artists displaying their work for sale.
Only 26 had heard about the Uluru Statement and the issues that flowed from it.

A man from across the border, speaking with me on condition of not being named, had detailed knowledge: He was at the Uluru meeting in 2017, but remains unimpressed with its results.

He described as the main problem the inevitable breaches of the taboo about not speaking for someone else’s country.

He said he had misgivings right from the start about inadequate consultation with the people on the ground. That – in his view of it – remains a problem.

He had also thought the purpose of the Uluru meeting was to replace the Intervention, the $587m package in 2007, also known as the NT National Emergency Response.
It was passed by the Howard government in response to the Little Children are Sacred report, an inquiry into child sexual abuse in the NT, commissioned by the Northern Territory Government.

I ask a man and a woman: “Do not know what the Uluru Statement is?”

They say they don’t know, the almost standard answer, or silence when I put the question.

A local man shared his views: “We support them what they do” but there is just not enough information.

I say: “It’s about an Aboriginal voice to Parliament, it’s about truth telling and recognition of Aboriginal people in the Constitution.”

“Not now. Until you just told me. I haven’t watched the news for … but I believe in all that. Thank you.”

Indicating the woman sitting beside her she says: “She won’t know it” and closes the conversation.

I ask a woman: “Are you aware of the statement?

I ask a man: “Are you aware of the Uluru Statement?”

“Nah, that’s all them bubblegum blackfellers.”

“What happened at Uluru?” asks another man.

A man challenges a tourist for taking photographs of women offering their paintings for sale: “We are not objects,” he says.

“We are human beings and we want to be treated as such.”

The man does not respond to my request for a comment and walks off, but catches up with me later.

He too is extremely concerned about possible breach of territorial taboos.

*The PM’s suggestion of a possible, simple referendum: “Do you support an alteration to the Constitution that establishes an Aboriginal and Torres Strait Islander Voice?”

He also suggested three sentences as a basis for discussion of such a proposed amendment.