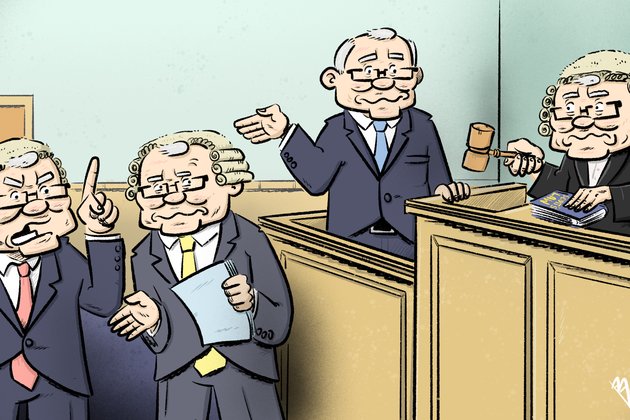 The go-to defense of pretty much everyone who is entangled in the scandal of Scott Morrison’s self-appointment to five ministerial portfolios other than his own is that no laws were broken. But this alleged legality – which remains unclear – is barely relevant to any judgment that might be offered on the affair.

Australia’s system of government would cease to function without its actors being willing to observe conventions that do not have the status of law. It is no defense of one’s behavior to say that no law was broken as a result of it.

Australia has a written constitution, but any casual reader of its text would gain little idea of ​​how the political system actually works. Ministers hold office “during the pleasure of the Governor-General”. The document does not mention the office of prime minister. It does not speak of a cabinet.

The lifeblood of the system is convention and practice. They are not to be found in the ink of the Constitution. Many of these conventions and practices were inherited, and then adapted, from Britain. In Australia, following developments in Canada in the late 1830s and ’40s, this agreed practice was sometimes called “responsible government”.

“Responsible government” was a colonial adaptation of a model that was also evolving in Britain. That is why we use the term “Westminster system” as a catch-all for Australia’s system of parliamentary government.

Read more: View from The Hill: The Liberals would be better off with Morrison out of parliament

The most famous and influential account of the Westminster system appears in Walter Bagehot’s The English Constitution (1867). Its central feature, he said, distinguishing it from the more drastic separation of powers and antagonism between branches of government characteristic of the presidential system of the United States, was “the close union, the nearly complete fusion, of the executive and legislative powers” .

The lower house of a parliament, ostensibly elected to make laws, would in practice find “its principal business in making and in keeping an executive” that “should be chosen by the legislature out of persons agreeable to and trusted by the legislature”. Under Westminster convention, a cabinet required the confidence of the popularly elected chamber which, in turn, was the mechanism for the government’s accountability to the nation.

Morrison did not apparently see that in secretly having himself sworn into a range of portfolios, he was misleading parliament and preventing the accountability that Bagehot saw the essence of the system. Instead, in seeking to justify his behavior, he used the phrase that US President Harry S. Truman had as a sign on his desk: “The buck stops here”.

In this vein, during his press conference yesterday, Morrison referred multiple times to the popular expectations of him. He was responsible for “every drop of rain”. Morrison seems to imagine the public believed government started and ended with him.

There was a time, not all that long ago, when phrases such as “individual ministerial responsibility” and “collective ministerial responsibility” were meaningful. The first was the principle that ministers were responsible to parliament and therefore to the people for what went on in their portfolios. They could not pass the buck to advisers or public servants, even if an error or misdeed had occurred in those quarters.

Collective ministerial responsibility referred to the cabinet’s responsibility as a body for its own decisions. If a minister felt only strongly opposed to a decision agreed by the cabinet that they could not publicly support it, the solution was clear. They would need to resign.

These were textbook concepts in high school Australian politics classes. It was widely understood that they were ideals and theories, that they would be applied differently according to the context.

But they were understood as Westminster conventions with genuine force and importance, even if an abrogation of convention did not carry the same consequences as a breach of law.

In contrast, we now seem to have a system in which it is considered a legitimate defense of one’s highly unconventional behavior to say that no law was broken. But this is not a legitimate defense in a system of parliamentary government that remains substantially on convention. It is rather a serious threat to democracy.

The electorate’s concerns with institutional integrity were manifested in this year’s federal election result. But Morrison’s highly secretive, underhanded accumulation of power would likely not be the fodder of a federal anti-corruption commission. This is all the more reason to be concerned at his “nothing to see here” attitude.

When the agreed way in which our politics is conducted is eroded, what happens then? Conventions are enforced by their usage. As the parliamentary practice guide notes, “conventions are subject to change by way of (political) interpretation or (political) circumstances and may in some instances be broken”.

But they simply cannot be set aside without serious and detrimental effects on the way we are governed.