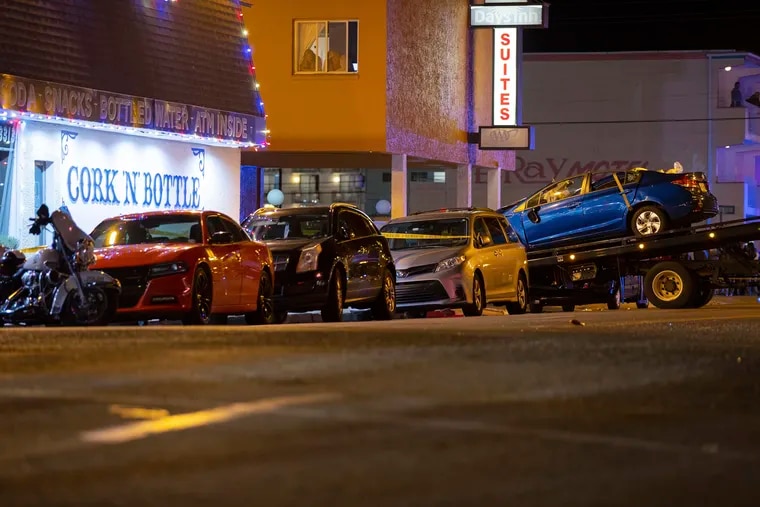 After two people were killed this weekend in Wildwood, NJ, when a driver struck a car and then hit two pedestrians during an unsanctioned drag racing rally known as H2Oi, the mayor said his first order of business Monday morning would be a call to his counterpart in Ocean City, Md.

It was there during a 2019 H2Oi event that the town was “under siege,” according to its mayor at the time. In 2020, the group’s last visit, Ocean City police issued more than 3,500 citations and impounded and towed over 350 cars throughout that rally.

“I can’t stop somebody from coming over the bridge with a car, we have to have just cause,” said Wildwood’s Mayor Pete Byron. “Only [Ocean City’s officials] must have come up with some kind of solution on the legal end to be able to discourage them from coming.”

In Wildwood, police charged Gerald J. White, 37, of Pittsburgh with two counts of death by auto and two counts of assault by auto, in the death of Lindsay Weakland, 18, of Carlisle, Pa., and Timothy Ogden, 34, of Clayton, NJ, as well as other cartoons related to White’s attempt to flee the scene, according to Cape May County Prosecutor Jeffrey H. Sutherland and Wildwood Police Chief Robert Regalbuto.

“We have heard of tragic deaths around this country based on stray bullets from illegal shootings hitting innocent bystanders and children. This is no different,” said Sutherland, who blamed the deaths on the H2Oi rally. “Driving a motor vehicle at a high speed in a populated area is essentially the same as discharging a firearm. The results are the same, death and injury.”

According to a news release from the prosecutor’s office, police officers were called to the intersection of Burk and Atlantic Avenues after a report of a multi-vehicle crash involving pedestrians around 9:30 pm Saturday.

White was driving a 2003 Nissan Infiniti when he first struck a 2014 Honda Civic, and then hit two pedestrians. Weakland, a pedestrian, died at the intersection. Ogden, a passenger in the Honda, died at the Atlantic City Medical Center as a result of his injuries. Police apprehended White after he attempted to flee the scene. No information about any injuries to the other pedestrian were released by police Sunday.

Authorities were aware of this weekend’s planned roadway festivities, and the city’s commissioners released Sept. 21 statement warning against reckless driving.

“The Board of Commissioners emphasizes that all visitors to the Wildwoods are welcome and are expected to obey all ordinances and laws during their visit,” the statement read.

The group, also known as H2oi or H2022, came to Wildwood the same weekend as the “Fall Classic Car Show,” which Byron said was a 30-year tradition that takes place as a parade during the afternoon along Pacific Avenue and later at Wildwoods Convention Center.

The usually sedate display of old-fashioned automobiles has never coincided with anything like the H2Oi rally, but Byron said officials planned for it with the New Jersey State Police, basing their preparations around previous weekend rallies the group had thrown in Ocean City, Md.

But Byron said Wildwood’s plans to control the event were outmatched by the large crowd.

“The game plan did not anticipate the amount of people that came down, which was in the thousands,” said Byron. “That game plan went right out the window by the second day, when the amount of folks that were here grossly exceeded what the projected amount were by the state police.”

In the meantime, social media accounts presented a car community raging over the “takeover” in Wildwood, and trying to create distance between the tragedy and what many said were once just car enthusiasts wanting to have a good time.

“Takeovers are different from shows and meets in big cities,” read a post on the h2oicars Instagram account, later removed. “Takeovers exhibit no regard or respect for the families or visitors of that city, and reverts years of effort of gaining respect for the car community that so many have fought for.”

An administrator for the Facebook group “H2oi wildwood 2022″ did not respond to messages seeking comment, and a later post on the site reported that all administrators had left the group.

“H2oi ocmd isn’t ever gonna be the same,” the Facebook group’s “About” section reads. “Even if all the sideshow kids stop coming the laws they set in place for car modification will never go away. It’s time to move on.”

Tyler Keller of Philadelphia, who witnessed the aftermath of the crash, described a mob scene and a pall of smoke over the shattered Infiniti and a body in the street.

Keller, 25, is a devotee of the H2Oi Facebook group but had only ever attended one other event in 2020. He says the group began as a meet-up for Volkswagen and Audi enthusiasts, but it attracted more unsafe and aggressive drivers as it grew in popularity .

“Not everyone that went to Wildwood for H2Oi was there to cause havoc,” said Keller. “It’s quite sad that everyone attending the event this weekend will be umbrellaed into the same group of people that caused this tragedy.”

Keller said that there is now discussion among members of the Facebook group about creating a sanctioned version of the meet-ups with safeguards to protect the public.

“The H2Oi group took a huge hit with what occurred and a lot of discussions will need to be had if there will ever be a chance to recover from this,” said Keller. “It will need to be sanctioned and a place will need to be acquired for the reckless people to do the dumb stuff safely.”

Dangerous driving and road deaths have surged since 2020 across the United States, part of a trend of reckless and uncivil behavior during the COVID-19 pandemic. Last week the National Highway Traffic Safety Administration released data showing that 20,175 people died in car crashes in the first half of 2022, a 0.5% increase from the first half of 2021.

The federal government reported, however, that the period between April and June saw the first decline in fatalities after seven consecutive quarters of increasing carnage, which started in 2020.