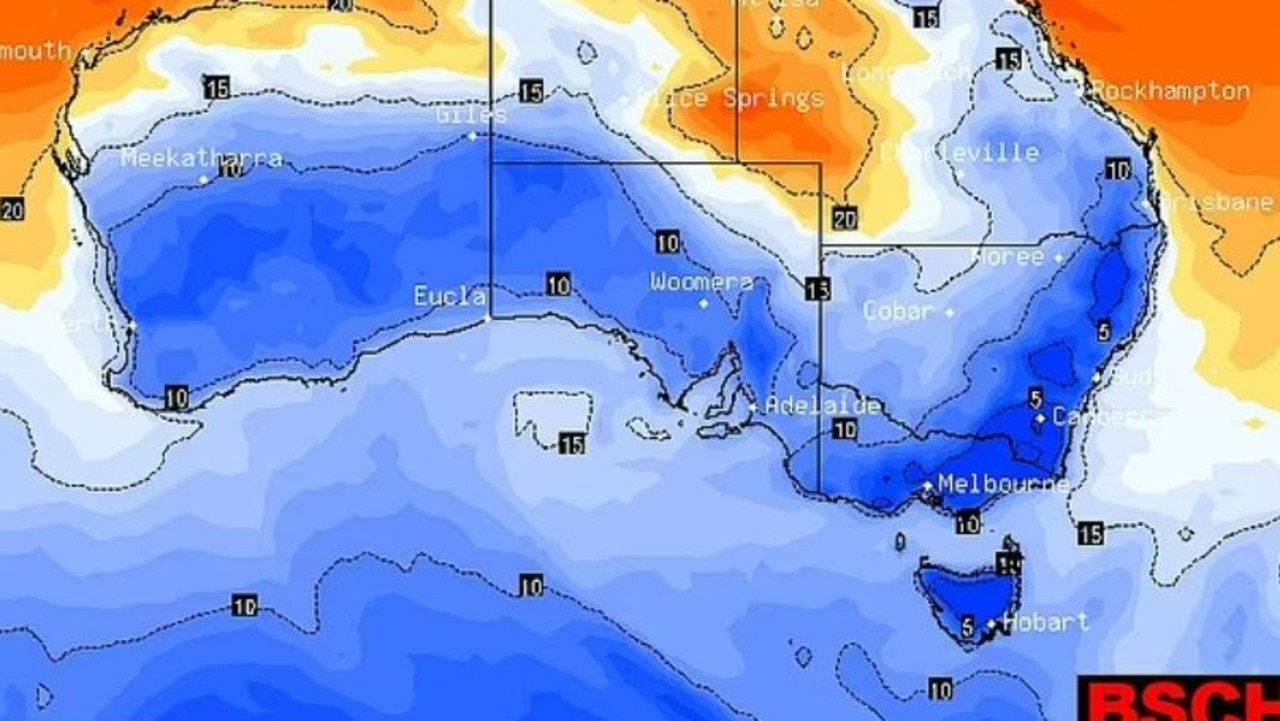 A polar blast will hit Australia on Sunday carrying icy weather just in time for the seasonal shift to winter.

Some parts of the country are set to experience their lowest temperatures of the year so as to make a cocktail of wintry weather conditions bring rain, hail, wind and snow.

Weatherzone meteorologist Joel Pippard said an Antarctic air mass encroaching on Australia on Thursday and Friday would collide with two moisture sources as it pushes northwards towards southern Australia on Saturday.

“The first is off the northwest shelf of Western Australia with a subtropical low and the second moisture source is a broad Tasman Low that looks to form over the next few days,” Mr Pippad said.

“The set-up of cold Antarctic air with moisture can be very conducive to heavy, low-level snowfalls.”

There is a high chance of snow falling over the NSW and Victorian Alps and the Tasmanian highlands as early as Sunday.

“May snow usually doesn’t stick around until the season opening in June,” Mr Pippard said.

“The exception is when it snows heavily late in May, as could happen next Monday and Tuesday.”

This occurred during the famous May Blizzard of 20000 that turned an NRL game in Canberra white and kick started an incredible snow season.

Southern Western Australia felt the chill on Saturday, the parts of the south cast were blasted with heavy rains, gusty winds and thunderstorms.

More rain is set for the northwest and Pilbara coast through Sunday with up to 90mm and isolated totals of 120mm forecast possible in some parts.

The Bureau of Meteorology has a severe weather warning in place for the southern state through Sunday as damaging wind gusts hit the region.

Adelaide is expected to reach lows of 9C in the early hours of Sunday morning, as many parts of the state experience the iciest day of the year so far.

Intense rainfall and thunderstorms will carry through into the start of the week.

Victoria will hold out until Monday and Tuesday before gusty showers, strong winds and possible storms hit the state.

Melbourne will see temperatures drop to 7C on Monday, with lows of 6C forecast for Bairnsdale in the state’s west.

Alpine blizzards are very likely to bring another dumping of snow on the mountain regions on Tuesday.

Severe thunderstorm and damaging wind warnings are planned for early next week with the possibility of hail.

An icy cold front carrying rainfall and gale force winds is on its way to inland New South Wales early next week.

A severe weather warning has been issued by BOM for the wintry blast which will focus on the west, as well as the central and southern ranges.

“Snow is expected in the Alpine region, with a chance of snow around higher parts of the ranges outside of the Alpine region extending as far north as the Central Tablelands,” the BOM spokesman said.

The east coast will be pummelled with strong winds on Monday and well into Tuesday.

The coldest temperatures won’t hit the capital city until Thursday when parts of the state’s central west including Dubbo, Coolah and Mudgee wake up to -1C.

Lithgow, Orange, Bathurst and Crookwell will drop to -2C on Thursday morning, while the coldest part of the state will be Armidale in the Northern Tablelands will hit a freezing -3C.

Thursday will also be the coldest so far for Queensland as morning temperatures in the south hit just 1C in Stanthorpe and Applethorpe.

The capital city in Brisbane will reach a low of 6C on Thursday morning.

The polar blast will arrive in the southern state with a bang on Tuesday as snow is set to fall as low as 700 meters.

Freezing temperatures and potentially damaging winds are forecast for the start of the week, bringing the chance of hail and thunderstorms.

Originally published as Freezing temps and snowfall to lash east coast, ahead of winter’s arrival