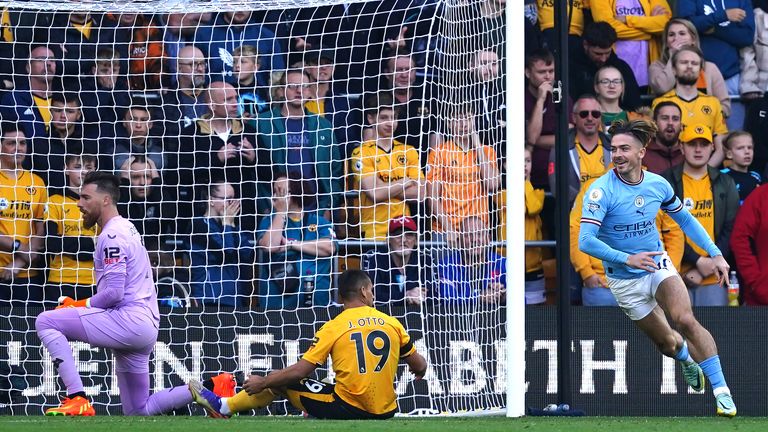 Erling Haaland scored again as Manchester City moved to the top of the Premier League table with a comfortable 3-0 win over 10-man Wolves at Molineux.

Jack Grealish opened the scoring in the first minute of the game before Haaland doubled the advantage soon after with his 11th Premier League goal of the season in just his seventh appearance in the competition.

Wolves’ problems were compounded when Nathan Collins was sent off for a wild and dangerously high challenge on Grealish that left Bruno Lage’s side with the unenviable task of facing the Premier League champions for an hour with 10 men.

Man of the match: Jack Grealish

Phil Foden’s second-half finish from Kevin De Bruyne’s assist – his second of the game – made it an easy afternoon’s work for Pep Guardiola’s team who remain unbeaten, the three points having also moved them ominously to the top of the Premier League table.

How Man City won it at Molineux

City had not been convincing in edging past Borussia Dortmund on Wednesday evening and with Wolves unbeaten at Molineux this season, there would have been some hope of a competitive game even if Diego Costa was not ready to feature for the home side.

But Grealish changed the mood after 55 seconds, converting De Bruyne’s cross from close range. The former Aston Villa captain found himself under scrutiny given his underwhelming form of late but his first goal of the season was some response.

Haaland’s goal was less of a surprise, only the nature of it breaking the trend of his recent strikes. This one came with his right foot and was his first from outside the area for City. The shot appeared to be a slight mishit but it was still too powerful for Jose Sa.

Bruno Lage made one change to the Wolves team that beat Southampton with Goncalo Guedes coming in for the injured Sasa Kalajdzic. There was no place in the squad for high-profile signing Diego Costa as he works his way towards full fitness.

Wolves showed some fight in the second half but that defensive vulnerability remained and they were exposed again for the third goal. Haaland was involved in the build-up this time, feeding De Bruyne whose low right-wing cross was turned in by Foden.

It was a procession thereafter. In truth, it already was. Seventeen points from seven games for City going into the international break and perhaps a team that is easing back into what Guardiola calls ‘the right gear’. The final chant from the City fans? Super Jack.

“I did enjoy it,” said Grealish afterwards, speaking to BT Sport.

“It was a long time coming, I have not scored since the West Ham game last season so it is nice to get off the mark this season and do it so early. It is a difficult place to come against a top, top team. They are so underrated by this Wolves team.

“I should be scoring more and getting more assists. The only thing I can do is that and I am going to have people talking about me for the money I was bought for but if you look at my career, at Aston Villa I only got a few goals and assists in the Premier League.”

“He played really good and strong, a good goal there,” said the Manchester City head coach. “He doesn’t lose the ball and a good performance for me. Hopefully he can continue in the national team and come back fit.”