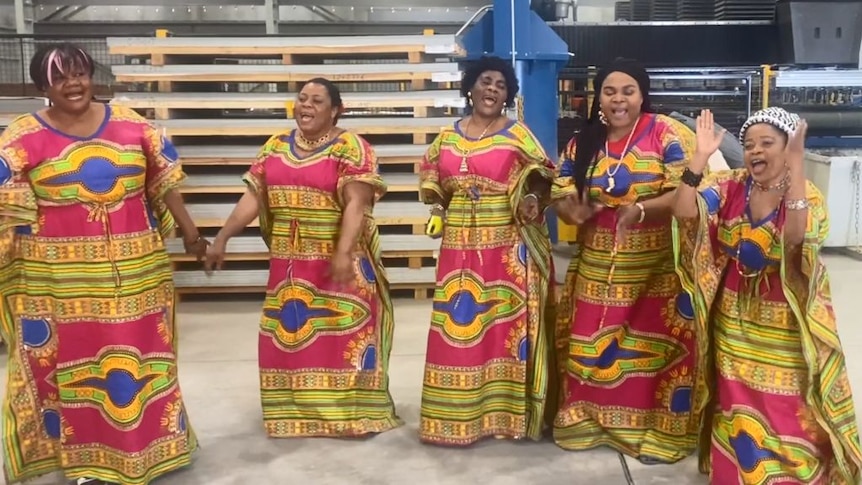 When Esiteli Nyirarukundo moved from a Kenyan refugee camp to Albury in New South Wales during 2016, she did not know what to expect.

She had lived in the camp for six years, after originally coming from the Democratic Republic of Congo (DRC).

When she arrived in southern NSW, she was just shy of turning 25, spoke limited English, and was a single mother to a young son.

Now she is the one helping people take their first steps to settle in a new country.

Ms Nyirarukundo is the local coordinator of a new program that helps migrants and refugees establish themselves in Murray and Riverina regional communities.

“For the longest time I’ve been having a passion to support and help migrants and refugees, because I understand their challenges,” she said.

Called Growing Regions of Welcome (GROW), the NSW government pilot program is particularly targeting people living in Western Sydney and showing them the opportunities that can be found outside the city.

The program was launched this week at the Kotzur factory in the tiny town of Walla Walla, north of Albury.

As she watched a group of brightly dressed Congolese women dancing and singing to celebrate the event, Ms Nyirarukundo couldn’t keep the smile off her face.

A good lifestyle and plenty of work

When Ms Nyirarukundo first settled in Albury, she did not know anyone.

But she did know some people from DRC who lived in Blacktown, Western Sydney. They tried to encourage her to move to Sydney and be near them and other people who shared her language and her culture.

“I went to visit there and stayed for one week, but I said, ‘This is not for me’,” Ms Nyirarukundo said.

“I didn’t like it. It was just too overwhelming for me.”

They encouraged her to do a course in community services and, after completing her studies, she landed a job as a bilingual support worker.

Now she is married to an Albury man, has three more children, and is building a house.

Ms Nyirarukundo hopes she can help others find homes and careers in the region through the GROW program.

“Most of my friends in Sydney are mainly driving taxis or those kinds of jobs. I think there’s a lot of benefit for people who want to come and experience the lifestyle [here],” she said.

“You get time to spend with your family. You can take your children to soccer, which is hard in Sydney because they are busy busy.”

Andrew Kotzur owns the silo and storage manufacturing business in Walla Walla and is closely involved in local planning for the GROW program.

He said the community stood to benefit, too.

“It’s no secret there’s a shortage of people for workforce,” Mr Kotzur said.

“I think that’s where it becomes a win-win.

“It’s a win for communities in terms of increasing their diversity, and clearly for businesses it’s an opportunity for prospective employees, and we don’t lose anything by providing opportunities.”

But Mr Kotzur said housing and transport posed a challenge.

“Part of the reason for the GROW program is so that we can collectively find solutions to those problems,” he said.

“It’s something a community like Walla Walla can’t do on their own, but by combining the Federation Council, Greater Hume Council and Albury council into this pilot, we’re hoping we can find solutions that will help us.”

NSW Minister for Multiculturalism Mark Coure was at the launch in Walla Walla and called the program a “game changer” for migrants and refugees.

“I think it’s a wonderful test case,” he said.

“It’s a wonderful example for the rest of the nation that a regional town such as Walla can open and embrace our migrants and our refugees here in regional NSW.

“It just shows that our multicultural success story is not just metropolitan Sydney or Melbourne. It’s right throughout Australia, from the beach to the bush.”

For Ms Nyirarukundo, it’s just exciting to get started.

“It’s rewarding to know that I can contribute to the growth and economy of this country, but also support migrants and refugees who are sometimes overlooked.”

But she acknowledged it could be “very, very hard” to move into a regional area with no connections.

“There’s fear of isolation, of being separated from your community, and you don’t even know if the community you’re going to is welcoming,” Ms Nyirarukundo said.

“That’s another big factor to make them stay here.”