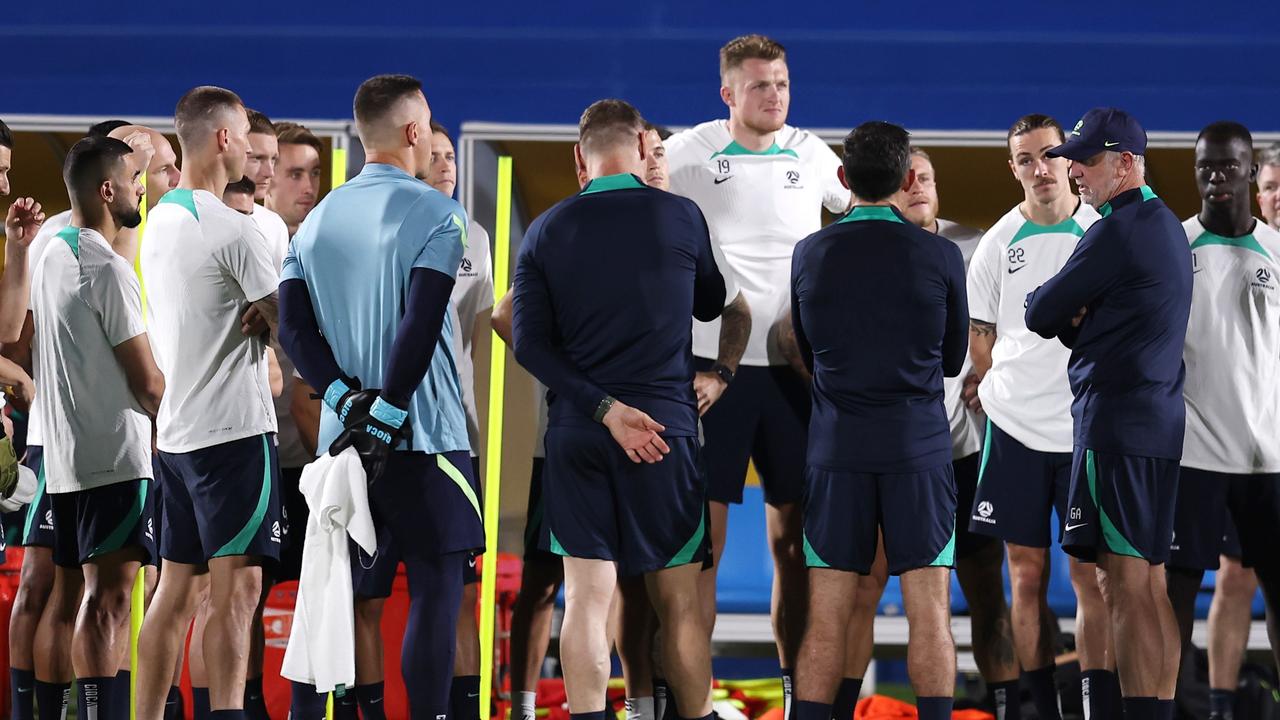 Socceroos coach Graham Arnold has spoken prior to his team’s final group game against Denmark in Qatar, saying he wants to leave a legacy for Australian football at this World Cup amid his concerns for the sport’s development in Australia.

Check out that and more Socceroos news below as they prepare for Denmark on Thursday morning.

If Graham Arnold was nervous before the biggest football game in his coaching career, he sure wasn’t showing it.

The Socceroos boss fronted the media the day before Australia’s game against Denmark in the final group game in Qatar.

For Australia, the equation is fairly simple – win and it’s guaranteed a spot in the final 16 for the first time since 2006.

A draw would also be enough as long as world champions France don’t lose to Tunisia. A loss and the Qatar journey is over.

Not that any of that was worrying Arnold.

He was more concerned about the worst moment in his football career being brought up.

Arnold was asked by an Iranian reporter if a result against Denmark – being played on November 30 – could make up for Australia’s heartbreaking loss to Iran on November 29, 1997.

For those readers lucky enough to not know what happened, the Socceroos led 2-0 at the MCG before two late Iran goals denied Australia a spot in the 1998 World Cup on away goals.

It was a moment that led to the late Johnny Warren to have tears in his eyes and struggle to talk on SBS straight after the game.

Arnold – at the tailend of his playing career – was a late substitute in that game.

“Thanks for ruining my day,” Arnold joked.

“That’s probably one of the worst moments in my football life, thank you. (But) we play on the 30th, so the 29th is a training day.”

The Socceroos are hoping to emulate the achievements of the 2006 squad, which made the second round after a dramatic 2-2 draw with Croatia.

Arnold was assistant coach back in 2006 under Dutch mastermind Guus Hiddink.

He was asked what he learned from Hiddink in his preparations for that Croatia game that he had passed on to the players in the past three days.

“Should I answer that Schwarz?” Arnold joked to 2006 Socceroos goalkeeper Mark Schwarzer who was at the press conference covering the World Cup for Optus Sports.

“One thing was we went out for a win, and that’s what we’re gonna do,” Arnold said. “I’ve never coached to play for a draw, it’s all about winning.

“When we talk about 06 and now, we want to go for it. In 06 we got one win (against Japan) and one draw (against Croatia) – our ambition is to get two wins and have the most wins at a World Cup.

“It’s about going out and winning the game.”

As for nerves before the Denmark game, Arnold was having none of it.

“Excitement,” he said when asked how he was feeling.

“It’s not often you get to go to a World Cup, I’ve been saying to these boys to enjoy the journey and enjoy the ride.

“I feel really relaxed and ready”

He was even happy to explain what needs to happen for football in Australia to truly grow.

“Socceroos is just the icing on the cake,” Arnold said.

“Whether that icing tastes good or bad, the most important thing is the ingredients. And the ingredients are junior development and junior national teams.

And if that’s not right, the icing will not taste very good.”

When asked by a British reporter if advancing from the group could mean young Australians wanted to be the next Mitchell Duke or Mathew Leckie rather than Shane Warne or Brad Fittler, he had a simple response.

“That’s the whole purpose,” he said. “My goal is to put a smile on the faces of Australians.

“If you’re not Australian and you don’t know, football in Australia is probably the fourth or fifth main sport.

“After AFL, rugby league, rugby union, cricket – then it’s football, they call it soccer. To leave a legacy is huge.”

Over the 30-minute press conference, Arnold – a long time servant of Australian football – spoke with passion about the sport.

As he said after the Tunisia win, it’s about putting smiles on the faces of Australians – either in Qatar or watching back home.

But he’s not content with doing it just once.

Graham Arnold has revealed his ‘massive concerns’ for the future of football in Australia, and the competitiveness of the Socceroos, while calling for a major overhaul of the country’s youth development systems.

Australia’s success in Qatar – where they broke a 12-year drought with their brilliant victory over Tunisia – is a credit to the tireless efforts of Arnold, his support staff and every player who featured throughout their arduous qualifying process.

But as Arnold says, it is simply the “icing on the cake” when it comes to football in Australia.

The real work happens in every tier below the Socceroos and Matildas, and this is where Arnold’s fears lie.

“The Socceroos are just the icing on the cake – and whatever that icing, whether it tastes good or bad, the most important thing is the ingredients,” Arnold said.

“The ingredients are junior development, junior national teams. If that’s not right, the icing will not taste very good.”

Arnold has not just steered Australia through some rocky waters over the past four and a half years to get them to this World Cup, he’s also taken on the role of head coach of the Olyroos – the nation’s under-23 side, which he guided to last year’s Tokyo Olympics and an unlikely win over Argentina.

Nothing has come easy, however.

Arnold was in Russia four years ago when Bert van Marwijk took the Socceroos to a group stage exit.

And what Arnold saw concerned him – an aging squad, spearheaded by the 37-year-old Tim Cahill.

“I could see straight away that Cahill, (Mile) Jedinak, (Mark) Milligan, (Robbie) Kruse… (it was) an aging squad,” Arnold said.

“I’d already taken the job, I needed to find players. And when I started looking, there was nothing coming through.

“When you’re ringing A-League coaches, and you’re talking about two players per club, I barely could put a squad together to go to Thailand, and even to Cambodia (for Olympic qualifiers). That’s not right.

“We need more kids given an opportunity in Australia. For me, there’s massive concerns for the future moving forward, unless it’s fixed.”

WHAT ARNIE WANTS TO ACHIEVE

Asked about his goals for this team, Arnold has repeatedly said he simply wants to put smiles on the faces of Australians. The fact that likely comes with victories, like against Tunisia, is simply more icing for Arnold’s Australian football cake.

But there’s more that can be born from this World Cup run: a legacy, like that which the Golden Generation’s 2006 delivered.

“To leave a legacy is huge. 2006, and what that generation did, all the kids that grew up… that’s these kids, this generation,” Arnold said, with 31-year-old Mat Leckie sitting alongside him.

“It’s about putting the game on the map a bit more in Australia, but there’s so much more work to do and to look at.”

But to capitalize on the interest this World Cup has generated, money is important.

Saudi Arabia has poured in funds to build their football program, and subsequently earned direct qualification ahead of Australia – highlighting the progress of Asian nations, and what Australia needs to do to keep pace.

“People can sit back at home and their opinion is maybe Saudi is not that good, or Japan. Look at what they’ve done. Beaten Argentina. Beaten Germany. Asia is throwing a lot of money into football and we need to catch-up.”